The streets are alive…

…with the sound of cheeping, whining magpies. Ye Gods, who’d be a magpie parent? On and on the young ‘uns nag – “feed me, feed me”- constantly hanging round wanting food. 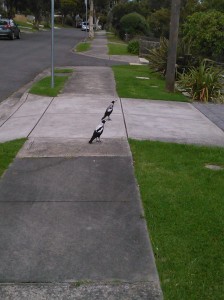 I have so many questions! Are these magpies here the same ones I see in the next street? Are they the same ones who were hanging around last year? Will they dive bomb me? How smart are they anyway?

And here’s a fascinating little podcast to answer all those questions and more. It was on Radio National’s Offtrack program last week;  it’s called The Colourful Life of the Australian Magpie and you can access it here. 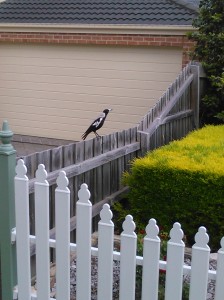 Posted in Life in Melbourne, Macleod, What I've been listening to

A year ago I wrote about the sad demise of my pergola on the back deck, brought down (literally) by a rampant wisteria.  I grieved its loss.  It was a verdant, shady space and it seemed stark and uninviting once the pergola and greenery were removed. 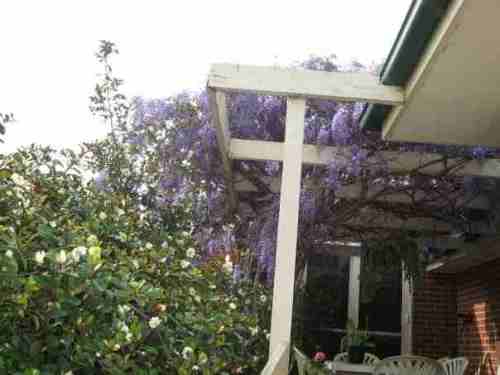 The original wisteria in all its glory

Oh dear. All fall down

Having learnt at first hand the ferocity of a feral wisteria, we opted for an ornamental grape instead. Hopefully it will turn a rich shade of red during autumn.  Its growth has been phenomenal.  We only planted it in October and it has grown about 3 cm a day and is still growing. We’re now starting to train it along the wires.

Posted in Life in Melbourne, Macleod 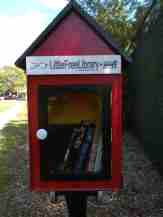 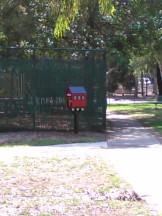 Welcome to Macleod shopping centre, Little Free Library.  May you stand tall, ungraffitied and unvandalized, opening your little door to readers on their way to and from the station.  What a lovely idea.

Little Free Libraries started in Wisconsin in 2009. Apparently by January 2015 there were 25,000 of them worldwide.

Stopping to smell the roses

From my study window, I can see everyone who walks along our street [cue maniacal laughter].  The room has an L-shaped window, so I can watch walkers as they pass several houses either side of me.  Unfortunately for my thesis writing, I seem to spend an inordinate amount of time looking out the window.

I’ve just seen a young man walking past the house across the road.  It has a white picket fence, behind which is a beautiful array of old, multicoloured roses.

He stopped, put his bag down, and smelled the roses.  Then he picked up his bag and kept going.

Somehow I don’t think that anyone will ever stop to enjoy a pebble garden with cordylines.

But I don’t like the PSO (Protective Services Officer) hutch at my railway station either.  It sits up against the entrance, so that everyone has to squeeze past it.  These dongas are part of a state government law-and-order policy to put armed security guards on every station after dark.  No staff, mind you, to sell you a ticket or tell you when the next train’s coming.  Just two goons with guns.  Of course, there’s nothing to do on these very quiet, deserted stations between the trains, so they need a shed. And the powers that be have decided that at Macleod, it has to be right in the doorway.  That’s nice, isn’t it? 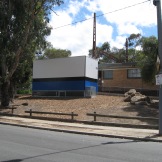 But so is that PSO hut.

And so, with great pleasure, I see that it has been tagged.  It’s the only one on the Hurstbridge line that has been so ‘adorned’.  I hope they do it again and again and again.  And I hope that they take this ugly, offensive and rude building away.

‘F**k PSOs’. I agree with the sentiments, if not the language.

On a happier note, I see that someone who loves Macleod is yarn-bombing it.  How appropriate for Macleod- the home of the nannas.  It’s good to think that young ones are knitting away, with a sense of humour, with a light touch that harms no-one and brings only pleasure. Thank you.

Does it have to be this ugly? 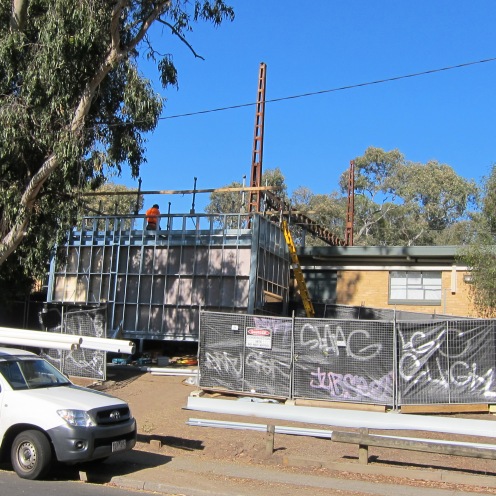 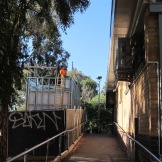 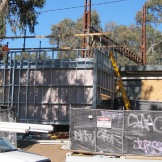 When I first heard about Baillieu’s plan to put armed guards on railway stations, I was not impressed.  I am even less impressed now that they’re actually arriving at my local station, Macleod.

Could a donga be any uglier?

The pipes, the pipes are calling

One of the joys of living in Macleod is the sound of bagpipes that drifts up the hill on Thursday evenings as the local bagpipe band has its weekly practice.  Up past Ferguson St, Strathallan Rd, Erskine Rd, Argyle St, Munro St it comes, borne on a hot summer breeze or cutting through the cold air on a still, brittle, frosty night.

But what was that rattle of the drums this morning?- and the pipes- lots of them! There they were on the basketball court at the local high school at 9.30 on a hot Tuesday morning

I’m not quite sure what it was: it may have been a camp for a band perhaps because people were wearing nametags on lanyards around their necks. 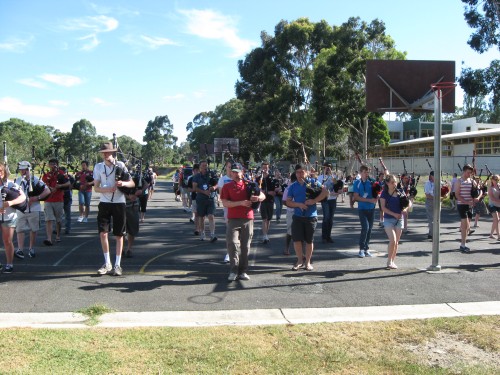 It was really encouraging to see such a wide range of musicians: young, old, male, female, Asian, Indian.  Somehow I think there will still be Scots Pipe Bands in fifty years time.  A thoroughly good thing too.

Posted in Life in Melbourne, Macleod, What I've been listening to