And so to the final day. Only two sessions today, then off to the airport and home.

My motel was beside the Big Banana on the Pacific Highway. Sadly, this ‘Big Thing’ didn’t seem so big anymore

The weather was humid and damp for much of the conference 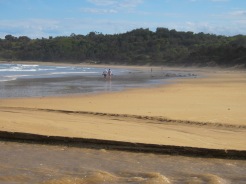 Gabrielle Wolf’s paper looked at the Medical Board of Victoria which had had to wait over seventy years to be granted the right to strike off medical practitioners for ‘infamous conduct’, even though the parallel board in England had had this power since the mid 19th century. When, in 1933 it  finally was enabled to do so, it took some three years before the first doctor was struck off- a Dr Cohen who was found guilty of disreputable billing practices.

The second paper by  Fiona Davis also addressed a critique of the medical profession, this time through the West Australian Royal Commission into Lunacy in 1928.  This inquiry was instituted through the needling of an ex-patient  W. E.  Courthope, an articulate and educated activist, who had been briefly committed to Claremont, Western Australia’s largest asylum. The commission, headed by a Victorian expert who was himself deeply embedded in the parallel system in that state, was not lengthy but it did take testimony directly from patients. Courthope was given latitude by the Commissioners to provide lengthy testimony to the commission,  possibly as a means by which his state of mind could be brought into question.  The commission mainly exonerated the staff and recommended business as usual. Courthope left for England, where he became engaged in labour activism.

The final paper in this session was delivered by Bevan Marten, who discussed the Vice Admiralty Court which had empire-wide jurisdiction but relied on local colonial personnel.  The appointment of the Governor as Vice Admiral seems to have been fairly straightforward, but the establishment of the Vice Admiralty Court and the judges to sit in it  was ill-defined.  The whole concept seems to have been a rather haphazard undertaking with indeterminate roles and processes that seemed to be discovered more in the breach than by outright direction. Nonetheless, ‘my’ Judge John Walpole Willis managed to become embroiled in the question of appointments to the Vice Admiralty Court, and Bevan’s presentation helped to explain why there seemed to be such uncertainty about judicial involvement in the court.

The last session, and the one for which I was scheduled was headed ‘COLONIAL OFFICE CASE STUDIES’, but because one of the presenters was absent, it combined the speaker from the other stream.  I was preceded by Mel Keenan who gave a fascinating paper about the attempted annexation of New Guinea territory by Queensland, and the discomfort that Governor Gordon of Fiji and many at the Colonial Office felt over this prospect. Gordon argued that Queensland in particular was unfit for the task, given its treatment of South Sea Islanders indentured as ‘blackbirds’. Although the Colonial Office disallowed the Queensland annexation, it very shortly annexed the territory itself, for fear of German activity in the region.

Then in my own paper I looked at two cases- one in British Guiana and the other in Port Phillip- where the Special Magistrates and Protectors appointed by the Colonial Office to oversee the protection of ex-slave Apprenticed Labourers and Aborigines were subjected to the scrutiny of the Supreme Court through Judge John Walpole Willis.

The final paper for the session and the conference was quite different both in time-span and approach to much of the rest of the conference. It was delivered by Louis Sicking from Amsterdam. He examined the phenomenon of funduqs, fondacos and feitorias which acted as a medieval form of consultate established by the Amalfi, Venetian, Catalan, Genoan and Portuguese traders during the early Modern period around the Meditteranean.  His final graphic showed the harbour front at Canton harbour, with the factors of the European powers, each in their own European building with flag flying at the front. It hadn’t been timetabled this way, but as the very last presentation of the conference,  it made a striking visual and historical link between this century-old trade and the colonialism that the conference had addressed through the theme of ‘Law’s Empire or Empire’s Law?’.

And so, home James and don’t spare the horses. Well actually, the engines were held because after embarking and settling in, we all had to disembark because of a technical fault, only to be called back to re-embark about fifteen minutes later.  I’m writing this on my tablet as the plane nears Melbourne. My ears are popping, the seat belt sign is on, the turbulence is rocking the plane and I think that finally the ANZLHS conference is over for this year.

Up bright and early for Day 2.  I’m not staying at the conference venue, but at a motel some 800 yards away. When I booked it I anticipated that I would be able to walk to the conference venue but my thrifty ways have been thwarted by the Pacific Highway!  I soon realized that there was no way that I would be able to cross the four lane highway during peak hour, so I’ve had to resort to getting a taxi the whole 800 metres.  I guess you could say that this little chicken DIDN’T cross the road!

During the first session I room-hopped between presentations because there were several that I wanted to attend.  While you do get to hear the papers you want, it is nonetheless a rather disjointed experience.  I started with John Orth’s presentation on The Rule of Law, which has been defined by the Oxford Companion of Law as “a concept of the utmost importance but having no defined nor readily definable content”.  As an American historian, he spoke mainly about the American concept of ‘rule of law’ and how it has been embodied through the constitution and its checks and balances.

Then off to hear Grant Morris who has recently published a biography of  the 19th century NZ judge, Justice Prendergast, well known in New Zealand for his hostile attitude towards the Treaty of Waitangi.  I was particularly interested to hear his perspective on legal biography in NZ (although I must confess to only having read one of the biographies that he mentioned).

Finally, off I scuttled to hear John McLaren whose  recent book ‘Dewigged Bothered and Bewildered’ deals with  19th century colonial judges who had been  removed from office, including my own Judge Willis.  His presentation dealt with a 20th century judge this time, the Irish judge Sir Michael McDonnell, who was Chief Justice of Palestine between 1927-1936.  It was an interesting paper, which drew connections between the British administration of justice in Palestine Mandate, and their handling of justice in Ireland between 1910-1921.

I stayed put in the one room for the second session which dealt with ENVIRONMENTS OF EMPIRE.  Libby Connors started with a disturbing account of environmental oversight (or lack thereof) in Gladstone harbour.  Her paper dealt with the industrialization of the harbour, especially after being declared a State Development Area, and the shortcomings in state and national law in complying with international protection protocols to protect the reef.  All rather discouraging.

Rachel Young’s paper on the concept of ‘timber’ as a legal category explored the question of whether the English doctrine of waste (i.e. that tenants could not clear trees from their landlord’s land) applied to Australia:  whether law devised for oak, ash and elm trees also applied to stringybarks and mallee.

Finally,  Nicole Graham noted that Australian law is not English, but is only ‘local’ in that it is not-English and is perhaps better understood as a variation of English law rather than something completely different.  After all, English law also has agricultural, pastoral and mining components, even though they differ.  She suggested that ‘Antipodean Law’ might be a better description. not so much of  a place, but a relation.

The session I attended after lunch(SHAPING THE FAMILY UNIT)  had only two papers.  Henry Kha gave an overview of divorce law and public policy in Victorian England, explaining the divorce process before and after the Matrimonial Causes Act of 1857.

Bettina Bradbury looked at property and inheritance cases that were referred from Lower Canada, Cape Colony, Victoria and New Zealand to the Judicial Committee of the Privy Council.   She described a number of cases, many of which focussed on wills, where the mobility between colonies often made complex situations even more complicated.

Then, to finish the day,  the final plenary lecture, given by Mike Grossberg from Indiana.  He picked up on Joan Scott’s famous observation about gender as “a useful category of historical analysis’ and suggested that age, likewise, form a ‘useful category of analysis’ in legal history.  He focused on childhood in this paper.   He grounded his presentation in stories , most particularly Joseph who  unsuccessfully sued his aunt and uncle for placing him into an institution where he remained, it seems, for the rest of his life;  Pearl S. Buck’s daughter, and Charley Ross who was kidnapped.  Even WonderWoman got a look in!

Well, here I am up in Coffs Harbour, at the Australian and New Zealand Law and History Society conference. It’s a terrific conference- not too many delegates, friendly and a diverse range of interesting papers.  It’s being held at a resort on the beachfront, which is certainly a more picturesque setting than most conferences enjoy.  It’s humid and thunderstorms and torrential rain sweep in from the ocean, then the clouds clear and the rainforest steams in the sun. I’m not giving my paper until the last session of the last day but I suppose that someone has to be last, and this time it’s me. END_OF_DOCUMENT_TOKEN_TO_BE_REPLACED