‘The Shelf Life of Zora Cross’ by Cathy Perkins 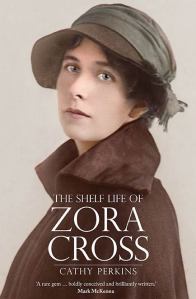 But the sale of the publishing rights, and the choice of front cover and illustrator were not in the hands of this young, barely-published author. This book, which is a biography of the now-forgotten Zora Cross, is also an exploration of the Australian writing and publishing scene of the first half of the twentieth century, particularly in Sydney and Melbourne. I had flutters of half-formed recognition of many of the names in this book, and the author has used them as anchors in each of the chapters that move roughly chronologically through Zora Cross’ life.  As Cathy Perkins writes:

I set out to write a conventional biography, but I was drawn to an idea of a life that was made of up relationships. Each of Zora’s relationships shows a different side of her personality and each has its own tensions. (p. xii)

The opening chapter, then, is subtitled Ethel Turner, who as well as the author of the much-loved (by me!) Seven Little Australians, also wrote the children’s page in The Australian Town and Country Journal. Children would send in their contributions and letters (I remember doing the same to ‘Corinella’ in the Sun during the 1960s) and ‘Zora Cross of Pie Creek Road Gympie’ was a frequent contributor. When she grew too old for the children’s page, she finally met her mentor in person.

Ethel Turner suggested that she try her luck with the Lone Hand, the sister publication to the Bulletin, and thus Cross started up a rather fervent correspondence with the editor, Bertram Stevens, who features in Chapter 2. In this chapter we learn of Cross’s employment as a school teacher and her strange, short marriage to fellow-student Stuart Smith, with whom she had a child who died soon after birth.  Pregnant again to an unnamed father in 1913, Cross travelled northern Queensland with a theatre company, and became editor to the small Bohemian newspaper of arts and social news.

She also wrote poetry for the Bulletin, and it was through this connection that Norman Lindsay, for whom Chapter 3 is titled, was asked to provide the artwork for Songs of Love and Life.  It was published by George Robertson, who features in Chapter 4, who carefully oversaw the sales and  reviews of the books under his imprint.  She wrote copious letters to him, too, and on the walls of his office he had a copy of the beautiful portrait that graces the front cover of this book. However, despite his success with Songs of Love and Life, he declined to publish other manuscripts of Cross’, along with the manuscripts of many other women writers who were to go to fame including Katherine Susannah Prichard, M. Barnard Eldershaw and Christina Stead.

She achieved success writing about the losses incurred in WWI, in Elegy on an Australian Schoolboy written in tribute to her brother John Skyring Cross (Jack), who is explored in Chapter 5. He died of illness after being injured on the Western Front.  In 1919, George Robertson asked his assistant, Rebecca Wiley, to go on a month’s holiday with Zora, who was feeling run-down. Chapter 6, named for Rebecca Wiley, explores the often tense relationship between these two women, especially once Zora had shifted to Glenbrook in the Blue Mountains with her partner, Bulletin editor David McKee Wright, who features in Chapter 7. They never married because David was still married to his previous wife, and she was pregnant to another man when they partnered. They had two daughters together, and David legally adopted her son. He died suddenly in 1928.

Now widowed, Cross continued to write, especially for the Australian Woman’s Mirror, an offshoot of the Bulletin which predated the still-extant Australian Women’s Weekly. Chapter 8, subtitled ‘Bernice May’ refers to her pen-name in much of the writing she did for ‘women’s pages’ . After falling out with George Robertson, she embarked on a series of interviews with fellow women poets and novelists for the Mirror, including Jean Devanny, Eleanor Dark, Dulcie Deamer, and Mary Gilmore.  A long-standing presence in Cross’s life was John Le Gay Brereton, Chapter 9, a friend of Henry Lawson, chief librarian and later professor of literature at the University of Sydney. His access to resources assisted her to write a series of books about Classical Rome, which were not well received (and sound pretty dire). As president of the Fellowship of Australian Writers, Brereton was a constant source of support when Cross made frequent, and generally successful applications, for Commonwealth Literary Fund pensions and grants.   Another longstanding friend was Mary Gilmore (Chapter 10) who was punctilious in overseeing her bequest of papers to the Mitchell Library. She died in 1963 and a year later, Zora Cross died of a heart attack.

This is a very skillfully written biography, maintaining its chronological trajectory while using various friends and colleagues as a prism through which to explore Zora Cross’s personality and writing.  Cathy Perkins, the author,  who is the editor of SL magazine and other publications at the State Library of NSW inserts herself several times into the narrative, in her research and  advocacy for Zora Cross.  As well as a biography, the book explores the literary industry and the whole issue of literary presence after death. Perkins’ decision to use relationships as an organizing device emphasizes the interconnections between writers and publishers, something that is often invisible to the reader.

She captures well the breadth of Cross’ writing, and quotes generously from her unpublished works, without necessarily championing its sometimes rather dubious quality, leaving it instead up to the reader to decide.  She portrays Cross as a fully rounded character: unconventional mother and partner, hard-working, flirtatious, sometimes needy, mother, grandmother and community member. But most importantly, as a prolific and life-long writer, even if she has been -until this biography- completely unknown today.

My rating: 9/10 A really accomplished biography