‘Owls Do Cry’ by Janet Frame

You may have detected a New Zealand theme in my reading lately.  This is because your Resident Judge is currently in the land of the Long White Cloud, and I often enjoy reading a book about or from the places I visit on holiday.  I’d already packed this book to bring with me, and was even further inspired to bump it up the “To Be Read While On Holiday” pile by visiting Janet Frame’s house between Christchurch and Dunedin. 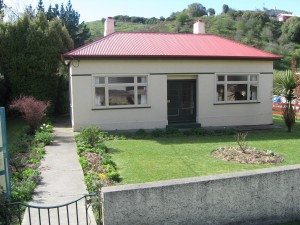 This book is very similar to her autobiography because it shares many autobiographical elements.  However, it is written as fiction with the barely disguised Frame family- the older sister who dies from burns (as distinct from drowning); the mentally troubled second sister (Janet herself); the epileptic, miserly brother, and the flighty and materialistic younger sister.  I’m not sure what her family thought about this book, which was one of the most warmly acclaimed of her novels, as they are certainly all identified quite clearly here.  I did read a biography of Janet Frame by Michael King some years ago, and I can’t remember what the family’s response was.

Although Frame’s autobiography was filmed by Jane Campion as “An Angel at My Table”, film of course always transforms an autobiographical source into something different.  The main character is the observed in a film, along with the other characters,  rather than the observer in the book who sees from the inside out.  In this regard, probably Owls Do Cry and the film are closely linked, more than the autobiography and the film that bears its name.

Frame writes beautifully with a real poetic sensibility.  At times her imagery is oblique and somehow distorted, but because of this it feels crisp, clear and somehow innocent.  It is truly original. The first section tells of the children’s poor and straitened childhood, and their grief after the death of the older sister.  Then the book splits into three strands, tracing the narrative through the perspective on each of the three remaining children in turn, twenty years later.  Toby, the brother, suffers from epilepsy and is “a shingle short” and lives an unhappy, frustrated, cloistered adult life with his parents. Chick (or Teresa which she now prefers to be called) is married with two children in the North Island, and her narrative is presented in the form of a diary as she and her husband strive for respectability and acceptance in a socially stratified community which sees through their materialism and anxiety about possessions and impressions.  The final strand is from Daphne (Janet’s) point of view and is fey, unhinged and lyrical.  There is a short epilogue that jumps ahead a further number of years, with a “what happened next” summary approach.

I’ve really enjoyed reading this book, having now seen the Oamaru that she fictionalized as Waimaru in this book.  She captures so well the cold and greasy poverty of working class rural life,  the anxiety of adolescence, the fug of family and the pain of being human.

3 responses to “‘Owls Do Cry’ by Janet Frame”