‘It’s Our Turn to Eat’ by Michela Wrong

Before I went to Kenya my son told me that I had to read this book in order to understand Kenyan society and politics.  Already rather anxious about his two-year stint in Kenya, I was not encouraged to find that a book that I expected to be about politics and history had been catalogued by my library as ‘True Crime’!

“Our turn to eat” refers to a Kenyan view that when you’re in a position to take advantage, you should do so because others have done so before you, and will do so again once you are no longer ascendant.

The book is written by a British journalist who sheltered the Kenyan whistle-blower John Githongo when he turned up on her London doorstep in 2005 after abruptly leaving his position as the Permanent Secretary for Governance and Ethics.

As the head of Transparency International, Githongo had been appointed to the position by President Kibaki, who had been elected to office on an anti-corruption platform.  He found that  instead of being empowered to challenge corruption, the position muzzled him.  Once safely in England, he blew the whistle on Kenyan corruption, most particularly the Anglo-Leasing Scandal  which, although started by an earlier government, was carried over into the new administration as well.

I was vaguely aware of the 2007 election violence and the international nervousness that it would be repeated during the 2013 election.  (It wasn’t).  Kenya was catapulted in Western consciousness with the Westgate Mall terrorist attack last year. [ John Githongo has written an interesting article about the official response to this attack, which draws on his arguments that are presented in this book.  It’s worth a read here.   ]  He argues that underlying the newsworthy, big-headline events Kenyan politics is a longer-running and more disturbing story of corruption that continues almost irrespective of the political party in ascendance at the time.  Because “it’s our turn to eat”, parties that campaigned against corruption in opposition will themselves embark upon it in the sure knowledge that they have only a short window of opportunity to do so.

Although  Githongo is the main character, the book is clearly written by Wrong and is  fast-paced, compelling  and very easy to read.  It provides a wealth of historical and social history about the tribal divisions in Kenyan society which were played out in the  violence that followed the 2007 elections.  It also presents a very pessimistic view of Kenyan politics: that corruption is endemic, and that there is no end in sight.  The fault lies with Western countries as well (particularly Britain) which turn a blind eye to money laundering and facilitate ongoing corruption through their banking, procurement and insurance practices.

As the epilogue explains, the book was boycotted by booksellers which  almost guaranteed its success.  The boycott was circumvented by a PDF version made freely available on the internet and an  NGO which gave away copies of it.  Apparently even today the book is not often found on the open shelves of Kenyan bookshops

After reading this book, I found myself more able to make sense of the politics that dominate the print media and news reports in the Kenyan public sphere.  I must admit, though, that it didn’t really reassure me. Perhaps it’s not the best book for a young ex-pat living in Kenya to recommend to his mum.

‘The Honey Guide’ by Richard Crompton 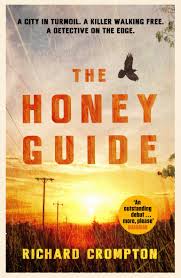 I was standing in a Nairobi bookshop with my son.  “Show me a best-selling Kenyan book” I said, and he handed me this one, all wrapped up in clear cellophane as Kenyan books tend to be.  It’s the debut novel of Richard Crompton, a former BBC journalist and producer who has lived in East Africa for several years.  I think that you can tell his BBC credentials in the writing of this book: he is hoping to create a series of books and I can just see this one as a three-part BBC series in the future.

Mollel is a Masaai policeman based in Nairobi, which immediately marks him out as an outsider. Masaai’s as a rule, do not seek careers in the police force, and Mollel takes no part in the Kikuyu-Luo rivalry that is implicit in Kenyan politics today.  He has his own tragedies, and he has only just returned to the force after a lengthy period of leave.  The case which opens the book involves a prostitute who has suffered a violent recent genital mutilation.  The trail leads to a powerful evangelical church minister, dodgy adoption practices and corruption at the highest levels.

But for me the real appeal of this book is the setting of Nairobi itself.  The action takes place in the days leading up to the 2007 election which led to an estimated 1300  deaths and widespread internal displacement as people fled their homes to what they perceived as safer regions where their own tribal group is more numerous.  In fact, the refugee camps of these internally displaced Kenyans still exist, seven years later.  The action is sited in actual places ( I’ve been to them!) and he captures well the sense of shock as things falling apart in what had, until then, been perceived as an operational-enough democracy.

I’m not usually into police procedurals in the books I read, although I am rather partial to the Friday night crime-fest of BBC programs on the ABC each week.  I think that the writer’s intention in creating a series is a little too blatant here, as he piles on the back-story in this first book.   In a series, this background personal information would be drip-fed in a  more subtle way over multiple episodes and even multiple seasons.   (Although, apparently the manuscript languished in his bottom drawer for many years.  Perhaps he’s only aspired to a series since the Ladies Detective Agency success!) The plot is rather over-egged, I think: just one or two of the multiple plot lines would be sufficient.  But as a creative and narrative response to the 2007 election it is well worth reading, and it has been even more enjoyable reading the book in Nairobi itself.

‘Out of Africa’ by Karen Blixen 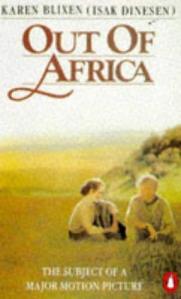 I don’t often read the book after I have seen a movie but as I’m in Kenya, it seemed particularly appropriate that I do so in this case.   I saw the movie many, many years ago and can barely remember it, but it seemed to me that the Robert Redford character was rather dominant in it.  Obviously the screen writers were drawing on other source material  in scripting the film, most particularly her letters I expect, because the Denys Finch-Hatton section is minor in the book and certainly not the main theme.  In the book, it is a rather chaste relationship, and she says nothing about Baron Blixen (her husband), adultery or syphilis.  She says little about the white settler Happy Valley set, and is even rather dismissive of them.

I confess that I was struggling a bit at first.  It is very much a book of its time and colonial mindset, and I found myself bridling at her patronizing ethnographic commentary and the see it-shoot it attitude that pervades the book.  She asserts a oneness with Africa and with her workers,most particularly Kamante the cook and Farah her overseer,  but it is shot through with a strong sense of noblesse oblige.  Nonetheless, she is critical of other people’s colonialism, but not her own.  Yet in many ways she comes over as an anti-colonialist that we might want to identify ourselves with today.  She comes to regret her participation in hunting; she lobbies the government for a reserve for the Kikuyu people and she recognizes that both white and native are obsessed with their own worldview and oblivious to the ‘other’:

The tales that white people tell you of their Native servants…If they had been told that they played no more important part in the lives of the Natives than the Natives played in their own lives, they would have been highly indignant and ill at ease… p. 186

There is not really a strong narrative line at all: it is more a series of connected and roughly chronological short stories.  One chapter ‘From an Immigrant’s Notebook’ is exactly that: vignettes that feel a bit like writing exercises that could be taken from a scrapbook.

My reading of this book has been completely shaped by my experiences while reading it.  I had commenced it in the knowledge that we would be visiting Karen Blixen House, and having been there, I have a much greater appreciation of the book.  Her life here centred on her farmhouse and  she describes events within the various rooms and places: writing in her sitting room, meeting with her workers on the round stone tables on the west porch,  working in her kitchen.  I’ve been there now, and can see her there.  But it also reinforces for me the strong sense of possession she proclaimed as colonist – ‘her’ kitchen, ‘her ‘ house, ‘her’ natives.

The writing  is evocative and beautiful, deeply imbued with a sense of place.

The geographical position and the height of the land combined to create a landscape that had not its like in all the world.  There was no fat on it and no luxuriance anywhere; it was Africa distilled up through six thousand feet, like the strong and refined essence of a continent.  The colours were dry and burnt, like the colours in pottery.  The trees had a light delicate foliage, the structure of which was different from that of the trees in Europe; it did not grow in bows or cupolas, but in horizontal layers… (p. 15)

However, I must admit that had I not visited the house, I would have closed the book thinking that it had been a rather insipid, dated and slight story.  And I must say that this book and the film seem to have very little connection at all.

Postscript: I’ve just read an article that compares the book and the film which argues that Blixen’s voice and viewpoint in the film has been twisted completely out of shape to emphasize the Denys Finch-Hatton character as the romantic and anti-colonial lead.  If you can access it (try State Library perhaps), the citation is: