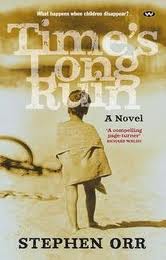 It seems to me that most recently-published Australian fiction books  hover around the 300 page mark, and it’s relatively rare to have a book that extends over the 400 page range.  So, at 422 pages, Time’s Long Ruin  is a lengthy book,  reflecting the title that is drawn from one of the three lengthy epigraphs on the opening pages.  As a book, it felt long too.  Part I, which was 179 pages in length, functioned to set the scene and introduce the main characters.  Part II at 243 pages traced the slow-motion disappearance of the children at the centre of the narrative, then the long unspooling of a fruitless  investigation and the unresolved grief of family and friends- a grief, anxiety and perplexity that still lurks behind parenting and child crimes today.

The plot is loosely based on the Beaumont children who disappeared in 1967 but the author relocated the timing to the early 1960s instead.  Given that the author himself was born in 1967, the rendering of 1960s Adelaide is drawn from research rather than memory, which is quite an achievement in itself.  Much of the book has the elegiac feel of a wistful memoir, with details and sensations piled on heavily- a little too heavily, I think, because it felt at times like a lengthy oral history.  There is an element of slippage in the narrator: at first it is an adult Henry, still living in his family home many years later looking back on his childhood, but then the ‘memoir’ voice morphs into the child’s eye view of  Henry, the nine-year old next door neighbour of the Riley children who disappeared.  This child’s-eye view of suburbia and the tapestry of local shopkeepers, teachers, doctors and neighbours is both perceptive and oblivious at the same time.

Perhaps the fact that the author himself is younger than the events he is describing accounts for a major infelicity that troubled me in the book.  The minute, step-by-step description of the children’s trip to the beach by train suggests that neighbours and incidental witnesses noticed the children heading off to the beach, as if there were something unusual or incongruous about it.  I’m not sure that there was.  A group of three children, especially, would have the run of the neighbourhood, and a train-line was just an extension of that neighbourhood.  I’m sure that the parents of the real-life missing  children blamed themselves and each other afterward, and I think that the blood every parent of a child of the 60s- of which I am one- ran cold at the Beaumont case (and still does). But  at Beaumont-time and even after,  children continued to roam the streets in little groups, returning home only when the street lights came on,  going from one friend’s house to another, catching buses and trains with little parental oversight- I know, because we did.  There was nothing so unusual in the latitude given to the fictional Riley children.

The author is quite clear, even by the subtitle of the book that it is fiction, and by warping the time-frame in the way he has, he gives himself licence to evoke other Adelaide-based mysteries and insecurities as well-  the Somerton Man case of 1949 (which I’d never heard of- I thought that Taman Shud were a band !) and hints of the Snowtown murders of the 1990s by placing one of the main characters there at the time of the children’s disappearance.  In this regard, I felt as if my Adelaide-buttons were being pressed to trigger my knee-jerk reactions to Adelaide mythology-  disappearances, dead bodies, and Don Bradman.  It seems a little too easy to do.

In the lengthy second half, the author of course is faced with the dilemma that having based his plot so closely on the Beaumont children, of course there could be no resolution.  Much of the narrative in Part II involves disclaimers “I couldn’t know, but I imagine that it went like this….”. Combined with the long scene-setting in Part I, this contributes to a nebulousness about the whole endeavour, which is offset to some extent by the meticulous detailing of place and milieu.

The book was long-listed for the 2011 Miles Franklin Prize but did not make the cut into the very short short-list.  I think that this is appropriate on both levels- it does deserve recognition as a careful depiction of Australian life, but I’m not sure that it is the highest expression of this.

Some other reviews of this book include Deborah Orr’s review in Transnational Literature, a review by Liz Ellison at Culture and the Media, David Whish-Wilson and Lisa at ANZLitLovers.

Read because: it was long-listed for the 2011 Miles Franklin. 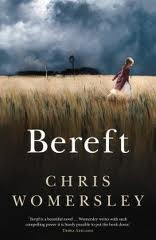 There are eras in Australian history which, in my imagination are flooded with light- the gold rushes is one; the time around Federation is another- when Australia seemed open to opportunities, hungry for change and with the future opening up before it.  Then there are other low, muted,  hold-your-breath times, and I think that immediately after World I would have been such a time.  So much death and absence, felt so keenly at the intimate and everyday level and yet played out so far away: men returning broken, damaged and strangers to themselves, and the incomplete, unresolved grief about those men who failed to return.  Then, overlaying all this is another winnowing as the Spanish flu sweeps the country, as if Death has been brought home from across the sea.

Bereft is set in this time.   Quinn Walker returns from the front to his childhood town, Flint, in western New South Wales.  There is no homecoming celebration: instead he skulks in the bush, too frightened to appear in public.  Ten years earlier he had fled when his sister was found raped and stabbed, and he was accused of the crime that his father and uncle swore to avenge.  Watching his house from a distance, he realizes that his mother is very ill, probably with influenza, and that his father, frightened of catching it too, spends little time at the home, sitting on the verandah outside his dying wife’s window.  And so he is emboldened to approach the house when his father is not there, and his mother, not sure whether he is a hallucination or not, speaks with him.  She has lost everyone- her husband to bitterness and the quest for revenge, her daughter to the slaying, her eldest son to Queensland.  Quinn had just disappeared, confirming the rumours of his guilt and then was reported dead from the front- but now her younger son returns.  There is the word ‘orphan’  for a child who has lost its parents, she says, but no word for a parent who has lost her children. Or, thinks Quinn, for a brother who has lost his sister.  They are all just bereft.

He is being watched while he hides out in the bush.  Sadie Fox, a dishevelled, fey little orphan knows many dark things, and Quinn does not know quite what to make of her- changeling? spirit? urchin? hallucination?  In the face of so much bloodshed and pain, the line between life and death seems tenuous.  It is a time when clairvoyants feed on unresolved grief, and when many people are open to spiritualism.  Quinn’s own experience of the mud and the gas of the Front leaches into his present, and his own long absence from his home town means that his own identity is a vacuum.

Although Womersley has worked very hard in embedding the narrative within a particular time, I can see why this book has been described as ‘rural gothic’,  along with other Australian novels that span right up to the 1970s and 80s- think Craig Silvey’s Jasper Jones,  Elizabeth Jolley’s The Well and Sonya Hartnett’s Surrender.   I do wonder, though, if the easy interchangeability of this book with others set some 70 years later suggests that (a) country life and country people do not change at all, and/or  (b) that he hasn’t quite captured early twentieth century relationships and interactions very clearly.  Did people speak, move and interact in a qualitatively different way in 1919 compared with 1969?  I’m not sure.

I can see continuities, too, with his first book The Low Road, in that they are both stories of escape and hiding.  In both of them there is a sense of pursuit.

Bereft is one of the three books that have made the cut as the short-list for the Miles Franklin prize. All up, Bereft is  a book that weaves many strands- historical fiction, a type of crime fiction, the supernatural, and small-town claustrophobia- and it does it well.  So far for me, though, That Deadman Dance is the front-runner- although my record in picking the Miles Franklin winner is, so far, abysmal! I was right but disgruntled in 2009 and wrong and outraged in 2010.

‘Rocks in the Belly’ by Jon Bauer

I’m not going to give this book a star rating (something I’ve only started doing recently anyway).  I really don’t know what I’d give it.  I very nearly didn’t finish reading it, and that is unusual for me: I usually hang on to the bitter end once I’ve started a book.  But I found this book very disturbing and unrelievedly painful and I did not enjoy the experience of reading it at all.  Is that powerful writing? Probably.  Did I want it to go on for even one page longer? Definitely not.

The story is written in two strands.  One is in the voice of eight-year old boy, an only child, whose family fosters other children as well.  They have been recently joined by Robert, an older boy.  The second voice is that of the same boy, now twenty-eight, returned from Canada because his mother is dying of brain cancer.  Significantly, we don’t ever learn what the narrator’s name is, and although the voice of the child and the man are distinctive, the pain, injury and jealousy throbs through both narrative strands equally.  A damaged and damaging child: a damaged and damaging man.

In the acknowledgments at the back of the book Bauer mentions that the book had an earlier incarnation as a short story.   Maybe a book so lacerating  should remain in a small format- a 190 page novella perhaps.  I did not want to keep reading, and I just wanted the pain, all round,  to stop. I tired of the scatological references to wee, the poo and doodles by the young boy and I shuffled uncomfortably at the violence and warped thinking of the man.  I didn’t want to be with any of these people.

I see that it has been long-listed for the Miles Franklin.  I’m not sure.  In fact, I was quite positive that it was set in England- to me it had all the hallmarks of the archetypal ‘gritty BBC mini-series’- and I was surprised flipping through the book later to find that there is no real indication of where it is set.  Its oppressiveness, the hedged garden, the upstairs bedrooms, all signalled England to me.  I don’t think that the Miles Franklin is the right award for this book.

I am sure, as Lisa at ANZLitlovers point out, that this book would spark a lively discussion in book groups.  However, thinking of my bookgroup ladies, I suspect that if I, not usually so disturbed by a book, found it difficult to continue then they even more would baulk at such unmitigated pain.