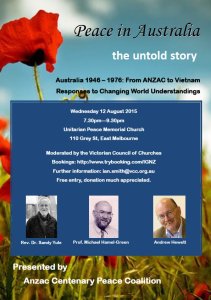 Two weeks ago I mentioned that I would be attending the third forum presented by the ANZAC Centenary Peace Coalition.  This series of fora has been running throughout 2015 at the Melbourne Unitarian Peace Memorial Church, following a chronological trajectory of the history of the peace movement from the early 20th century through to today.

This third session, hosted by the Victorian Council of Churches, dealt with the period immediately following World War Two through to Vietnam.  Of course, by this stage we’re venturing into living memory.  Many of the audience were themselves participants in these events as part of their life-long commitment to peace activism.

Andrew Hewett commenced with the post-war period.  During the 1950s and early 1960s the peace movement was largely caught up in the politics of the Cold War.  Conscription was introduced for the Korean War, but not for overseas deployment.  It was not a time of militant activity or demonstrations and the Peace Council was strongly identified with Soviet  ideology. The Melbourne Peace Congress was held in 1959 with over 1000 delegates and led to the formation of the Council for International Co-operation and Disarmament.   The Communist Party of Australia and the trade unions provided original grunt and international links.  They were joined by the Peace Parsons, the Unitarian Rev Victor James, the Presbyterian Rev. A. M Dickie and Rev. F. J. Hartley from the Methodist Church.   In 1960 the first CND (Campaign for Nuclear Disarmament) group was founded in Melbourne and the Victorian Peace Council was disbanded.  The CND, part of an international movement, increasingly turned its focus to Vietnam.  (See e-Melbourne for a good entry on this).

Michael Hamel-Green, who gained much prominence as a conscientious objector during the Vietnam War took up the story for the 1960s and 1970s.  The CND focused on the Pacific, where nuclear tests were taking place. Some ALP politicians took up the cause (Calwell, Cairns and Uren) and a nuclear-free Pacific became ALP policy.  The introduction of conscription for Vietnam and the extension of conscription for overseas service came as a surprise to many.  In the two years after its introduction (1964-1966) there was initial dissent, particularly amongst teachers, and between 1967-9 there was a shift to non-violent civil disobedience.  The government was reluctant to jail large numbers of objectors.  Between 1970-2 there was mass mobilization, culminating in the May 1970 Moratorium march (interesting video here- look at it!), which 1 in 30 Melburnians attended, blocking the city from William Street to Parliament House.  The Liberal/Country Party coalition government withdrew all combat troops in 1971. (See a 1970 article written by Michael Hamel-Green in all his youthful passion here)

Finally Rev Dr. Sandy Yule spoke about the relationship between Christian Churches and the anti-Vietnam protests.  He was a member of the Student Christian Movement at time, and the Church had had a long-standing presence in the peace movement of the late 1950s and 60s through the Peace Parsons (Revs James, Dickey and Hartley) and through the World Council of Churches’ opposition to the apartheid regime.  The 1948 Christmas Bowl Appeal marked the shift of the churches towards development as a vehicle for peace, as did the Action for World Development inter-denominational initiative. He noted that the churches have a role as a source of peace-making, especially through models of consensus decision making.

The evening finished with questions from the audience.  The masculine dominance amongst the speakers (and the audience-questioners too) was properly noted by an audience member.  The next and final forum, ‘From Military Security to Human Security’ to be held on 26th October, will provide some balance here, with three female presenters (Professor Jacqui True from Monash University; Prof Robyn Eckersley from University of Melbourne and Ass.Prof. Marianne Hanson from UQ).

Posted in ANZAC Centenary Peace Coalition, What I've been listening to

Peace in Australia: From Federation to the Aftermath of War 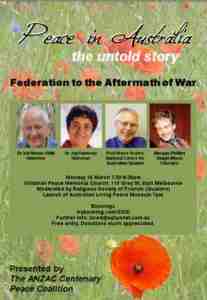 So there I was at a packed Melbourne Unitarian Peace Memorial Church on Monday night for the second forum presented by the ANZAC Centenary Peace Coalition.  Chaired by the Quakers, the night started with Joy Damousi who reminded us of the progressive social policies  by which Australia defined herself at Federation: progressive social policy,  female suffrage, the eight hour day, the basic wage, pensions.  However, from 1907 onwards there was an increasing militarism, with compulsory military training for males between 12 -25 years of age from 1911. Both conscription and the peace movement existed prior to World War I.

The speakers were separated by a musical interlude by Morgan Phillips and his guitar accompanist.   At this point they gave a rendition of that 1915 hit, “I Didn’t Raise My Boy to be a Soldier”

Val Noone was next, speaking about the Australian Peace Movement between 1914-18. He did this through seven snapshots of activists including Mark Feinberg from the International Workers of the World (IWW), Margaret Thorp the Quaker leader of the Womens Peace Army, Archbishop Daniel Mannix and a number of conscientious objectors.  He noted that over time there was a change in attitude amongst the population at large, with a higher proportion voting against conscription in the second referendum.

The musical interlude to close off Val’s presentation was a song about the Christmas Truce in 1914.  I’m not sure if this is the song that was sung, but it’s quite beautiful nonetheless:

Finally Bruce Scates, leader of the One Hundred Stories project,  gave an emotional account of the True Cost of War, based on the repatriation records of WW I soldiers which have been digitized by the National Archives.  What a rich historical resource they are- it’s amazing to think that they were slated for destruction, but fortunately saved.  Monash University will be conducting a free online course commencing 13 April 2015 based on these  archives to “forever change the way you see the Great War”. Have a look at Monash University’s One Hundred Stories site. You can sign up there for the course, or just spend some time looking at the stories which are presented as silent slides.  He spoke of Frank Wilkinson (Story 11).  For Frank, the war didn’t end on 11 November 1918.

His presentation was closed with “And the Band Played Waltzing Matilda”.

The night ended with a very Quaker-ish minute of silence.  A fitting end.