When considering early Australian and New Zealand history, you have to keep your bifocals on. Isolated ‘down here’,  ten thousand miles from ‘home’, with at the least a six month round trip for any official communication,  it’s possible to view events and people through a local lens with a type of nonchalance about pronouncements and edicts that arrived from the other side of the world.   But taking a broader view, the network of relationships and communications between the colonies themselves and the Colonial Office formed another type of reality- not as immediate perhaps, but imbued with the finality of ultimate veto.  But both local and distant views have the illusion of solidity: neither is as straightforward as it appears.

The “Fatal Necessity” described in Peter Adams’ book refers to the mission creep that accompanied the creation and signing of the Treaty of Waitangi in New Zealand in February 1840.   The Colonial Office developed the treaty from a theoretical duty springing from the legal bond between subject and state, in order to control and protect British subjects who had chosen to go to New Zealand.  A second imperative was the increased humanitarian concern for the aboriginal people already there.   A third imperative, more urgent from the Antipodean perspective than that of the Colonial Office, was to prevent Maoris selling their land to strangers- particularly the French who were perceived to have designs on New Zealand.  The Colonial Office originally planned to gain sovereignty over only parts of New Zealand, but when the New Zealand Company despatched large numbers of settlers under systematic colonization, the Colonial Office realized that the whole colony had to be annexed.

This book shifts between the motivations and actions of individual men at the local, antipodean level- Gipps, Busby and Hobson- and the political manoeuvering of pressure groups and politicians to influence Colonial Office policy in London.  In particular Adams concentrates on the Church Missionary Society and its president Dandeson Coates, and the New Zealand Association- later the New Zealand Land Company- a group of investors influenced by Wakefieldian ideas of systematic colonization.   Diametrically opposed in their objectives, these two pressure groups circled around the main political and bureaucratic figures in colonial affairs, conducting meetings, petitioning and lobbying all as part of the game of politics and patronage.

Ten thousand miles away, Gipps, Hobson, Busby and Wentworth may have thought that they were key players and that their actions and submissions were influential, but this was a delusion. More important was the political make-up of British parliament and the always-present imperative to retain power.  Hence we see the clash of the Lords – Lord Howick, Lord Durham, Lord Melbourne, Lord Glenelg – doing deals, appeasing, jockeying and saving face as part of another dance of politics far removed from the lawn of the Resident’s House overlooking a quiet bay on the other side of the world. 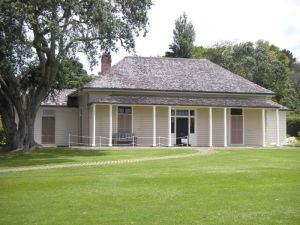