Even though it’s only fifteen kilometres from home, apart from a brief house-sitting stint in Brunswick about twenty years ago, attending my doctor’s surgery and the occasional visit to a Turkish restaurant, I have very rarely been to Brunswick. Yet in the last three days I’ve been there twice, both times for events organized by the Brunswick-Coburg Anti-Conscription Commemoration Committee 1916-17. 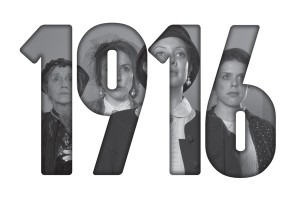 On Saturday night we attended the Metanoia Theatre at the Brunswick Mechanics’ Institute to see ‘1916’, written by local playwright Neil Cole as part of the centenary of the successful ‘no’ campaign during the two referenda over conscription during WWI.  Of course, a play written with an intent to inform and based on real events (as this play was) faces constraints in characterization and plot that a play written purely for entertainment does not. That given, the performance rocketed along for sixty minutes, tracing the activities and perspectives of three women in the months leading up to the referendum in October 1916. Adela Pankhurst, the estranged daughter from the famous English Pankhurst suffragette family arrived in Melbourne, where she appeared in anti-conscription rallies alongside local suffragist and peace activist Vida Goldstein,  the first woman to stand (albeit unsuccessfully) for Parliament. However, fellow suffragist Milly Woods (the playwright’s grandmother) broke with her former colleague Vida  out of a desire to support ‘our boys’ in the war, when her own family members enlisted and were sent to the front. The interplay between these three women demonstrated the rupture of relationships between activists who had fought for women’s votes as just one manifestation of the general fracturing of public opinion during the referendum. The play consisted of multiple scenes, depicted chronologically, which were supported by visual images on a slide show, and separated by songs of the time, very ably sung by girls from the Brunswick Secondary College.  The lead singer of the chorus, in particular, had a beautiful voice and the three main female characters were well drawn, especially, I thought, the older woman Milly Woods.

Then on Monday, over to Brunswick we went again for a history walk conducted by Michael Hamel-Green, seeing places connected with  local Brunswick anti-conscription activists John Curtin, his mentor Frank Anstey and local schoolmistress and activist Julia Guerin.  Brunswick and Coburg were hotbeds of anti-conscription activities, largely because of the strong dominance of Irish Catholics in this working-class neighbourhood.

We started off in St Ambrose Hall, the hall that was attached to the Catholic primary school next door. One of the few 19th century church halls surviving in Moreland, anti-conscription meetings were held here even though the Town Hall was just next door.  The council worthies tended to be pro-conscription, as were most of the major institutions of the day (schools, churches, local newspapers etc) and so meetings were held in the more amenable surroundings of the Catholic church hall.

Inside St Ambrose Hall. Quite evocative really. You could easily imagine the smoke-filled interior echoing to cheers and boos 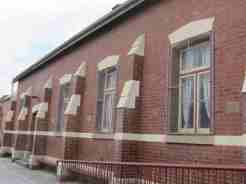 St Ambrose Church Hall from the outside

John Curtin, the future WWII Prime Minister shifted to Brunswick with his family as a young boy in approximately 1899. For a short while he attended St Ambrose Primary School, until leaving school at age 14, as was common at that time for working-class lads.  When Archbishop Daniel Mannix opened a wing of the school on 28 January 1917 (maybe the one with the 1916 foundation stone?) he made his famous ‘trade speech’ where he characterized WWI as “like most wars- just an ordinary trade war”. 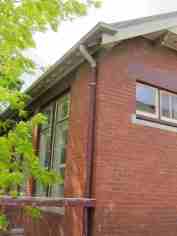 The foundation stone was laid by Archbishop Carr in 1916

The Brunswick Mechanics Institute, constructed in 1868, was used as the recruiting centre for the war during 1914-18. (It was here that we saw the play 1916 on Saturday night). I’m a little surprised that it was used for recruiting, rather than the town hall across the road, although often the committees of Mechanics Institutes tended to be stalwart and ‘respectable’ men of the district and perhaps they were happy to lend their premises to the enlistment effort. 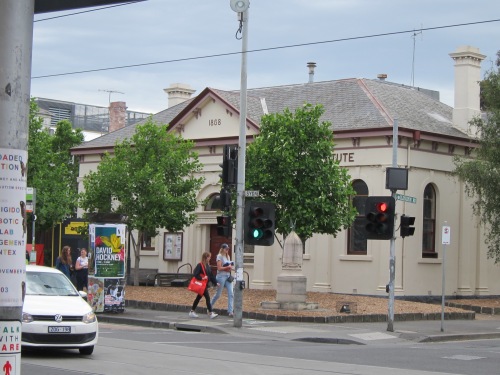 Then into the Town Hall itself and its stunning vestibule covered on all four sides by the names of the 3575 Brunswick men who enlisted.  Those who died were commemorated in a special panel, but it is notable that all enlistees were named, including those who enlisted but did not embark, in alphabetical order, irrespective of rank. 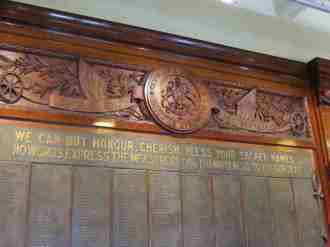 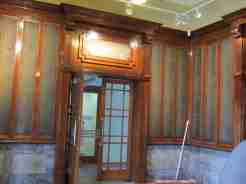 We visited two of the many homes that the Curtin family rented in Brunswick. They lived in the house below for five years between 1903-8 (the longest that they stayed in any one home). By then Curtin was working in a regular job as an estimates clerk with the Titan Manufacturing Company in South Melbourne and his weekly wage of 35 shillings ensured that they could now confidently meet the rent each week- something they had not been able to do previously.  They lived in the cottage on the left hand side, with the arched window.  The four-dwelling terrace has these rather ecclesiastic windows on three of the houses, but the fourth window next door to the Curtin residence has been replaced by a rather unprepossessing aluminium window.  There is no plaque outside this house.  There is now a park beside the house (which has been renumbered since Curtin lived there). The MMBW map shows that during Curtin’s time this was a clay hole, which would have provided clay for the brick factories in the surrounding area.

Not far away is another of the rental properties occupied by the Curtin family (below).  John Curtin lived here with his family between 1913-1915 and it was at this house that he was arrested for refusing to attend the call-up on October 9, just prior to the referendum. At this stage he was working for the Timber Workers Union.  There is a plaque here in the footpath, the only one in Brunswick marking his presence.

Finally, and rather poignantly, we ended up outside the Union Hotel, one of Curtin’s favourite watering holes, close to home and a favourite of the Irish brickworkers.

The walk over, I headed to Jewell Railway Station to catch a train into town. Ah! here’s one of the artworks created along the Upfield railway line out to Fawkner cemetery.  I read about these. 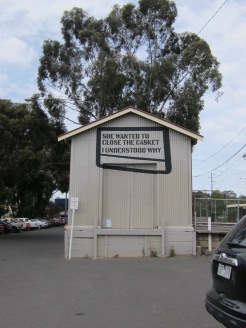 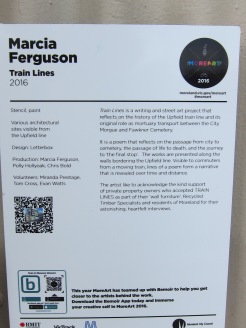 Inside the abandoned ticket window at the unmanned station there’s another little art installation.  It’s of a chemist shop window, but when you look more closely, they’re rather subversive products on sale 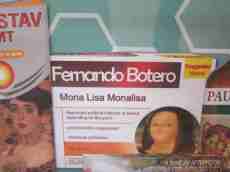 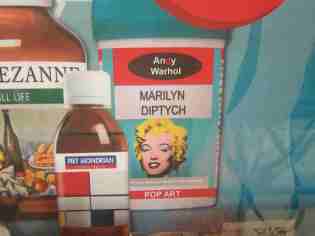 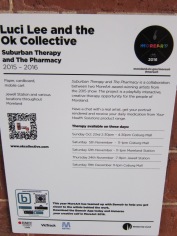 And so, as the train bore me the remarkably few stations into the CBD, I bade farewell to Brunswick for now, and its referendum commemorations.  Although, from the sound of the activities that the Brunswick-Coburg Anti-Conscription Commemoration Campaign have planned for next year, I think I may be back….