A reserve for a market had been set aside on the original grid survey, close to the wharf and bounded by  Market, Collins and William streets and Flinders Lane. Liardet’s picture of the market space, show below and painted from memory some forty years later, is striking in its depiction of the stumps of felled trees in the large square space that was used for the market.

The Landing Place and Market Reserve in 1839 by W.F.E. Liardet (1878) State Library of Victoria

In October 1839 the NSW Legislative Council passed an act (3 Vic No. 19) permitting the establishment of markets in towns other than Sydney and Parramatta, where there had been markets for some time. By 1840, with its population and trade steadily increasing, the good people of Melbourne wanted a market too. In August 1841  after the stipulated request from householders, the NSW government authorized the election of market commissioners  by public election.

Under the act, the number of commissioners was fixed to the size of the population. If the population was more than 4000 (which Melbourne was), then at least 3 wards would be created with two commissioners each. As a result Melbourne was divided nearly into four wards with the dividing lines being Bourke and Elizabeth Streets, a division which was maintained through most of the 19th century. The franchise was low – an annual rental of £20 or freeholders to the value of £200 – for males only, of course. Bernard Barrett in The Civic Frontier (p 23) estimates that of a total population of about 9000, about 3000 qualified under the property franchise. [You’ll note that Barrett’s number of 9000 was much higher than the numbers reported in the 1841 census. In fact, it’s hard to pin down exactly what the population of Melbourne was. The Geelong Advertiser of 17 July reported a total of 11,728 for the Port Phillip District and 4479 in Melbourne. I’m sure that this election would only have covered Melbourne. Quite frankly, I don’t know.]

In the week or so leading up to the vote, advertisements were placed in the newspapers, requesting a particular candidate to stand. By 2 November, the candidates were:

The newspaper editors and proprietors are well represented here (Arden, Kerr, Fawkner all in the SouthWest ward, and Cavenagh).  Under the Act, the arrangements for voting were:

Section 18: That every person being qualified and registered as aforesaid and intending to vote at such election shall deliver to the presiding officer a ticket with the names of the persons written thereon for whom he intends to vote, the number of such persons not being greater than the number of persons to be elected, otherwise the said vote to be null and void, and the said ticket so signed by the person presenting it after being read aloud by the presiding officer shall be forthwith deposited in a box, and shall not be withdrawn therefrom until the same shall be delivered to the scrutineers.

Section 14 At the hour of three o’clock on the day of election the box shall be delivered to the scrutineers who shall within forty-eight hours afterwards certify in writing to the police magistrate the names of the persons elected.  [PPG 23/10/41]

As was the custom at the time, this was an open election where after a voter filled in the ballot and his selections read aloud. This was seen to be a public check on the process, as the voter could challenge it immediately if the wrong names were announced and any attempts to ‘steal’ the election could be publicly challenged.

And so, as the Port Phillip Patriot ( the paper with connections to William Kerr and John Fawkner) recorded:

THE ELECTION. Tuesday, the 2nd November, being the day appointed for the election of the Commissioners of the Melbourne Market, at an early hour Thomas Wills Esq. JP, the gentleman appointed by His Excellency to preside at the election, accompanied by Skene Craig Esq, one of the scrutineers, took his seat on the bench at the police office, which Major St John had kindly vacated for the day.  The several candidates who had been put in nomination were also invited to take their seats on the bench.

The number of voters who had registered their qualification was very small as compared with the number whose names should have been on the list, but indeed, it was obvious that up to the last moment (notwithstanding that the press had been laboring to attract public attention to the subject,) the great bulk of the people were not aware whether they were entitled to vote, or even of the Ward in which they were respectively resident.  Generally speaking there was the usual listless apathy displayed which is characteristic of the people in these money-making colonies, but Mr Fawkner and his supporters formed an exception to the rule, the candidate himself being decorated with a blue sash, and his voters distinguished by breast knots of blue ribbon.  Indeed, in Mr Fawkner’s case, the customary festivities of an English election were in some degree observed, open house being kept in the William Tell for all such electors as displayed “the ribbons o’blue” and the walls being placarded in all directions with “Vote for Fawkner and Economy”.  [PPP 4/11/41]

The Port Phillip Gazette (with connections to George Arden) wrote in a similar vein:

As early as possible in the day, Mr Wills JP, appointed by the Governor to act as president on the occasion, took his seat on the Bench, accompanied by Mr Skene Craig, one of the scrutineers; they were joined at a subsequent period of the morning by Mr J. B. Were and Captain Cole.  Among the candidates were also present: Mr W Kerr, Mr J Stephen, Mr J Peers, Mr G Arden and Mr J. P. Fawkner.  As soon as the doors of the Court were thrown open, the electors who had incurred their rights of voting by previous registration, came up in considerable numbers to present their tickets in the prescribed form. Although great good feeling and order was preserved, there was an absence of spirit and a lack of promptness, which resulted probably from the novelty of the power vested in their hands by free citizens. Some little display of blue ribbons, and what we deprecate as being less harmless, some approach to hilarious excess was visible among the electors …The polling was quickest  between the hours of eleven and twelve, flagging after that period, until the close of the proceedings which took place at three o’clock.[PPG 3/11/41]

As was the Port Phillip Gazette’s wont, it had great fun at the Patriot’s expense through a Bob Short anecdote. This article, featuring an ignorant  ‘Bob Short’ (a thinly disguised John Fawkner) and his friends, was an ongoing joke that ran through the Gazette’s pages, playing no doubt on the pre-decimal currency idiom of ‘a few bob short of a pound’ to suggest dim-wittedness.  Is this the start of the traditional Australian sausage sizzle at the election booth?

“HERE’S YER BOB SHORT SAUSAGES!” Such was the shout which startled the electors upon “the first dawn of civic freedom” on Tuesday last. Anxious to obtain a view of the mouthpiece, we elbowed our way through the crowd and observed a man who is professionally known as the “Flying Pieman” covered from heel to truck with blue ribbons, while upon his arm hung a basket, containing about twenty pounds weight of the spicey [sic] article denominated “Bob Short Sausages” and which some of the supporters of that worthy were purchasing and masticating with much apparent gout; while others screwed their faces into divers contortions as morsel after morsel found its way down their throats, and swallowed more in honour of their champion than from any particular relish, or press of appetite.  The articles certainly looked very suspicious; but whether manufactured of the canine or feline race, were admirable representations of that choice Melbourne Commissioner “Bob Short”. [PPG 6/11/41]

Despite this being the first chance for Melbourne householders to flex their electoral muscles, few bothered to vote.  Only 328, or about 10% of eligible householders according to Barrett’s figures, bothered to enrol.

As the Port Phillip Gazette editorialized on 6 November:

…we cannot refrain from remarking on and lamenting the unnatural apathy which has marked the conduct of the residents in carrying out an affair of the first municipal consequence…The qualification for a vote was so low ( £20 rental)  as to render it virtually universal in its operation. Every householder, from the lowest to the highest, had the opportunity of exercising a privilege which, as it was the earliest occasion of its introduction into the colony of New South Wales, should have been claimed with avidity worthy of its character, and in accordance with the enterprise of the people of Port Phillip. [PPG 6/11/41]

The Port Phillip Herald reported that: “The scrutineers have thought it best not to make known the number of votes for each candidate, the tickets and numbers have therefore been sealed up to prevent disclosure” [PPH 5/11/41].  However, the Port Phillip Patriot did give the figures for the south-west ward (where Fawkner, the paper’s proprietor won): Fawkner 62  Arden 47  Kerr 26  Nodin 21.  Twenty four had neglected to vote; and several votes were in dispute.[PPP 4/11/41]

Readers of a certain age in Melbourne will remember Guy Fawkes night, building bonfires and setting off crackers.  Although still celebrated in England, it’s largely forgotten in Melbourne now.  It was, however, celebrated in Port Phillip:

GUY FAUX “Pray remember the 5th of November” &c. In humble imitation of the mother country, the rising generation of the province carried out the usual ceremonies and proceedings which obtain in the vicinity of the [?source?] of its origin, and Mr Guido Faux was effigied throughout all parts of the town, and in the evening was consumed at sundry bonfires amidst various specimens of the pyrotechnic art[PPG 6/11/41]

There was an influx of Timor ponies into Port Phillip in early November, and they were sold at auction on 4th November.

HORSES “The Lombock horses for spirit and powers of endurance resemble those of Timor, but they are in addition much larger and stronger. The present lot have been selected by an experienced judge from the stud of the Rajah of Lombock, and their sale will doubtless attract a numerous concourse of the admirers of “blood, bone and beauty”.

On 8th November, the Patriot reported that the majority of them  sold at prices varying from £13 to £22 each. A second consignment of 112 ponies landed on  The Georgiana,  from Copang, in the Island of Timor. This later group, reported to be in “a very reduced condition” sold for between £8 and £15, while the remaining Lombock horses sold at average price of £14 per head. [PPP 11 November]

A song for November

The Port Phillip Patriot was characterized as the most radical of the three Port Phillip newspapers. I was surprised by this poem published on 4th November which, while extolling the freedom and liberty of Australia, praised the champions of independence Washington and Bolivar as leading stars. Not sure that Her Majesty would be too amused… 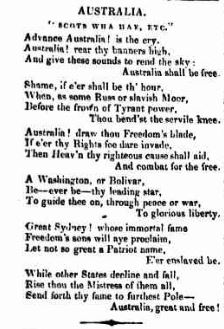 It’s to be sung to the tune ‘Scot Wha Hay’. So, here’s the tune- feel free to sing along!

Fresh breezes and strong winds; weather generally cloudy with frequent rain, but in inconsiderable quantities. The top temperature for the week was  a balmy 79 (26) with a low of 44 (6.6)  The coldest day for November was recorded on 7th.