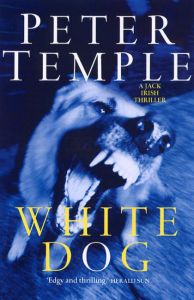 I think I’m just going to have to admit that I don’t really like Peter Temple’s books very much.  I’m already ambivalent about the fictional crime genre and Temple’s books, with their abbreviated dialogue and huge range of incidental characters, just confuse me.  I looked back at my review of Truth, another of his novels, and I could just as easily cut-and-paste the comments that I made about that book into this review too.

Just to add to the confusion, the ABC has recently screened another Jack Irish series that uses some parts of White Dog, but not the whole book. So not only did I have Guy Pearce firmly embedded in my head (no hardship, I must say) but I found myself half remembering some aspects of the plot and misremembering others that appeared in the television show only.

Like the other Jack Irish novels, White Dog is steeped in local Melbourne colour, very familiar to north-of-the-Yarra inner suburban Melburnians (as I am). However, it’s a rather curmudgeonly approach, dismissive of hipsters and all-day breakfasts and harking back to a 1980-1990s cool, and even further back to the glory days of Fitzroy Football Club.  It’s all thoroughly recognizable to a Melburnian but I don’t know that it would add much for readers elsewhere.

So all in all, not a particularly successful read.