‘My History’ by Antonia Fraser 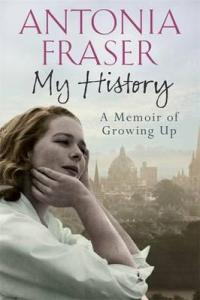 Clever little title for a historian’s memoir, this. “ My history” in terms of background, family, early life etc and “my history” in terms of Fraser’s professional identity and published works.  I generally enjoy reading historians’ memoirs. They usually have the skills to put together a satisfying narrative arc ( or at least, you’d hope that they do). I enjoy reading about their intellectual and academic growth, and their perspectives on the writing process. I quite like the namedropping if it’s an area I’m familiar with (and read through gritted teeth if it’s not).

I’ve read quite a few Antonia Fraser books, all before I began blogging (Six Wives of Henry XVIII; The Gunpowder Plot; Marie Antoinette: The Journey). Oddly, though, I’ve never really thought of myself as a fan and I find myself recoiling a bit from the very proper and so terribly British persona she projects when I’ve seen her interviewed. However, I also read, and blogged The Perilous Question which I thought was excellent, and because it was based on a phenomenon -in this case, the 1832 Reform Act- rather than a person,  quite a different endeavour to her other books.

She was born in 1932 as Antonia Pakenham, the daughter of the 7th Earl of Longford, named after Willa Cather’s book My Antonia and pronounces her name that way (AN-ton-ee-a). Her parents sound interesting: her mother was a Unitarian and a later convert to Catholicism, along with her husband and children. Antonia’s parents were both Socialists and both well ensconced within the gentry, a combination which I find fascinating. In many ways, she ‘grew into’ her parents as she became older. She attended Dragon School and St Mary’s School Ascot and went to Oxford University through Lady Margaret Hall. However, she describes herself as a less-than-brilliant student and went to work at the publishers Weidenfeld and Nicholson as an all-purpose assistant.

Despite this less than stellar academic career, she was always drawn to history, most particularly the story of Mary Queen of Scots. It was only when her mother, herself a historian, mooted writing a biography of Mary Queen of Scots that Antonia threw herself into what had been until then desultory research, to fend off her mother’s interest in what she saw as “her” topic. It was the first of Fraser’s books, published in 1969, followed by other biographical works with a particular focus on royalty, but she widened her scope over time. She has also written crime novels and an account of her relationship with playwright Harold Pinter, her second husband.

Lady Antonia Fraser is titled three times over: first as the daughter of the Lord of Longford; then through her first marriage to Sir Hugh Fraser, the Tory politician (to whom she says she was attracted because of his politics on the colonies), then finally as the recipient of a DBE (Dame Commander of the Order of the British Empire) in 2011 for her services to literature.

There’s quite a bit of name-dropping in this book, and the first chapter was disconcertingly genealogically-based. Fortunately, it picked up after clambering around in the branches of family trees and I found her account of her racketty-gentry upbringing interesting (although quite foreign to this antipodean reader). At the end of the book she discusses some of the difficulties of biography-writing, most particularly the telescoping of time when the subject’s life grinds to a slow pace. Like all biographers, she speaks of the emotional experience of seeing letters written by her subject, and her love of “optical research” (i.e. touring around visiting places of significance in her subjects’ lives).

In all, a capably written memoir, as you might expect, but one that underscores that Fraser is not firmly ensconced within the world of academia. It gives an interesting perspective on a WWII gentry upbringing, and although it didn’t make me fall in love with Fraser as a biographer (as Richard Holmes’ memoirs did here and here), it did me a new respect for her biographical works.  I’m not sure if she’s still working- born in 1932 she’s getting on a bit- but she certainly has a solid body of work to her name.