‘Australia Under Surveillance’ by Frank Moorhouse 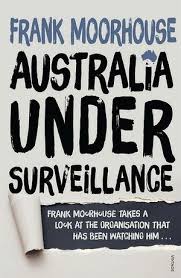 I was too young and too tightly restrained by my parents to become involved in the Vietnam Moratorium Marches or any other form of political activism during the 1970s. (I waited for middle-age to indulge!)  I think it highly unlikely that I have an ASIO file, although I remember reacting with a jolt when a congregation member at the Melbourne Unitarian Peace Memorial Church mentioned in passing that there was probably an ASIO agent within our midst. He may have been right, and he almost certainly would have been right during the 1950s- 80s.   In recent years, activists writers and performers who were of interest to ASIO have been able to access their files from 30 years ago and found a curious mixture of banal, puerile and chilling reports on their activities.

Frank Moorhouse was one such person of interest, and I was attracted by the subheading to this book “Frank Moorhouse takes a look at the organisation that has been watching him”.  I am rather embarrassed to say that I haven’t read any of his works (I do have them on the shelf though) but I was aware of the essay ‘The Writer in a Time of Terror’ that he wrote for the Griffith Review in Summer 2006-2007.   It was highly acclaimed, garnering the PEN/Keneally Award, the 2007 Alfred Deakin Award for Best Essay in the Victorian Premier’s Literary Awards 2007 and the  Walkley Award for Equity Journalism. Three other essays followed (listed below).

This book draws heavily on the essay- very heavily, I found when I double-checked. I enjoyed most the parts where he spoke about his own entanglement with ASIO (or more properly, ASIO’s entanglement with him) but I did find the rest of the book rather bitsy. It is structured as seventeen chapters, but each chapter has the appearance of being a separate part, with its own title page.  Visually and in an argumentative sense, such overt separation of the chapters disrupts the flow and suggests a significance to each discrete chapter which is not perhaps justified.

There is a rather curious and lengthy chapter entitled ‘The Interview with Director-General David Irvine- My File Keeper’.  Over sixty pages in length, it is a  transcript of Moorhouse’s interview with the  ASIO Director General. It starts with Moorhouse describing how the interview was set up, and noting that he has “smoothed it out- removing repetitions and irrelevancies, completing sentences” etc.   He also includes “interpolations and commentary” in squared brackets which, for me, compromises any attempt at verbatim reporting.  He excuses such methodological untidiness by admitting that while such a practice gives

the advantage..that I have, as it were, the last word.  But this interview is certainly not the last word from either of us on any of the issues discussed. (p. 158)

Nonetheless, it is a chilling chapter, made even more so by the recent appointment of the same former Director-General David Irvine as the new advisor to the new Border Force.  In many ways recent events have raised the temperature even more, especially with the announcement by those black-clothed Border Force officers that they would check the papers of anyone they encountered – a half-baked plan that was abandoned very quickly in response to  immediate community outrage.  I was already unnerved by this development and after reading Moorhouse’s book I am even more so.

In his acknowledgments, Moorhouse notes that this book came together after eight years. The essays that formed the basis of the book were  ‘The Writer in a Time of Terror’ Griffith Review (summer 2006-2007); ‘Beyond Stigma’ (Griffith Review 33); ‘Dark Conundrum’ (Griffith Review 41) and ‘Pocket Litter and Two Jokes’ (Sydney Morning Herald 29 August 2014). He later notes that “The Writing and editing of Australia Under Surveillance was, for personal reasons very difficult”.  He himself describes the book as “an eight-year exploration rather than an argument for a thesis….”. Perhaps, given its unevenness, it is best read that way.

On a related matter, the National Archives in the UK  have just released the files on Burgess and Maclean, part of the Cambridge Five spying ring.