A little trip to the country

We unexpectedly had a couple of days away this week at Lorne, some 140 km from Melbourne along the spectacular Great Ocean Road.  We stayed at the Mantra, the former Erskine House guest house: something I probably swore at some stage I would never do.  Erskine House was located on Crown Land and there was strong opposition to its sale to developers (in fact, there’s an interesting paper by Brian Walters QC about the use of defamation threats to silence opposition to the project here). It certainly is surrounded by apartments, although it’s possible to walk through the complex if you so desire and it still has beach access.  It’s a sad thing that you look at it now and think “it could be worse” and probably would be, were the development proposed today.

Armed with a ‘Lorne Heritage Walk’ brochure, we headed off to see the historic homes, most of which are located in Mountjoy Parade, overlooking the bay.

We found ‘Banyule’, although it’s not the Banyule that I know and love. There was an old house located far back on the block, with its magnificent view blocked by shrubbery.

You could barely see the house at all 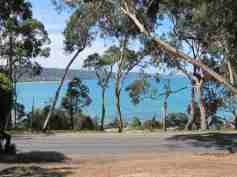 This is the OTHER Banyule!

At bit further along was “Jura”, built in 1919 using Knit-Lock bricks, patented and used by Walter Burley Griffin in a number of his properties, although this is possibly the largest surviving example of their use.  This grand, rather heavy-looking house was built for the Western District pastoral family, the Campbells.  It would have been cutting-edge architecture at the time, although it seems to me to be rather ponderous design for a beach-house.

Did I go for a swim? Yes, I did even though the temperature was only about 23 degrees. Believe me, the water was much colder! I seemed to be the only person without a wetsuit.

Next morning we headed off for the Otway Fly Zipline.  You’re kitted into harness and helmet, then you climb a tower about 20 metres off the ground. You’re clipped onto a cable that is strung between two ‘cloud stations’ and off you go! There are seven cloud stations in all, two of which are connected by suspension bridge.

Well, it’s not me.  She’s smiling. She’s not gripping her harness, white-knuckled.  She looks like she’s enjoying it.

I wonder why they didn’t interview ME for this promotional video?

Or if you want even more….

Oh lordy, even the music is stressful! Anyway, I’m glad that I didn’t chicken out on the first leg (which I very nearly did.) I’m also glad that I never have to do it ever again for the rest of my life.

Recovered enough, we headed for home. We stopped off at the Gellibrand River pub for a drink.  Gellibrand River had been one of the stations on the Colac-Beech Forest railway, constructed in 1902.  The pub itself was 120 years old, tucked away on the river bank. 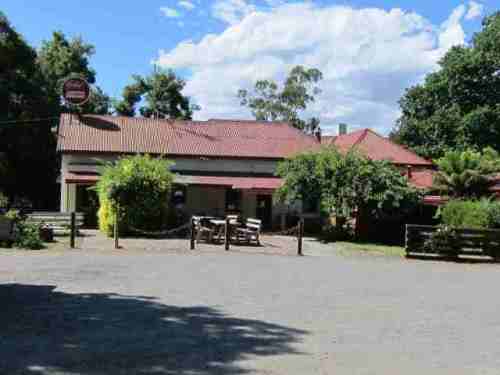 In Colac we passed Holts Gun Shop, “Victoria’s Largest Gun Shop”. Thinking of the gun supermarkets in the United States, I’m glad that I live in a state where this is the biggest gun shop. 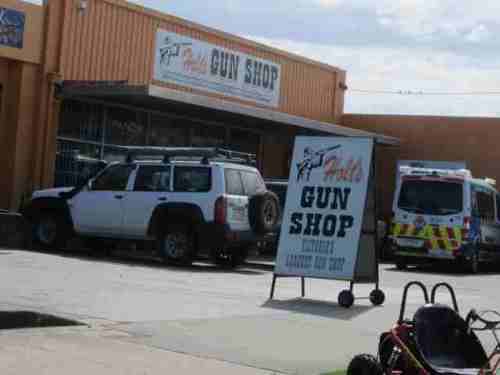