‘Flood of Fire’ by Amitav Ghosh 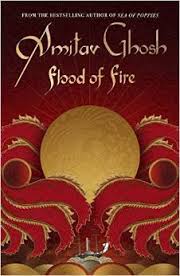 Yes, I know that I vowed after reading River of Smoke that I’d only read trilogies that were finished, so that there wouldn’t be a long gap between volumes. But I’d already read the first two books; Flood of Fire was sitting there on the library shelf;  and I did enjoy the first two, didn’t I?  And so,  having checked my own blogposts, and armed with the Wikipedia synopsis of the first two books, once more I ventured forth into this final, 600 page volume.

I found that I really needed the synopsis because this book draws together the narrative of the first two volumes. Sea of Poppies had focussed on the passengers on the refurbished slave-trader boat the Ibis; the second volume River of Smoke shifted to two other boats in the fleet, the Anahita and the Redruth. In this final volume, characters from both preceding books are thrown together, on opposing sides, in the First Opium War of 1839-1842.  As with the other books in the trilogy, it is exhaustively researched (evidenced by the long reference list at the end) and pointedly political.  As a work of informed, fictionalized history it flirts with the boundaries between fact and fiction, especially with the character of Neel Rattan Halder, who even now,  after I spent ages looking on the internet, I’m not sure was an invention or not. (Ghosh’s epilogue suggests that he is a historical figure who generated a rich documentary archive- but I’m not sure. Is the epilogue part of the story too?)  There’s an interesting interview with Ghosh posted here on his website where he discusses methodology.

As with the earlier books, there is re-invention (such a strong theme in colonial social history, as Kirsten McKenzie had shown in her work) and slippage between racial boundaries, caste and political loyalties. These themes are shot through with a trenchant critique of colonialism and the free trade philosophy trumpeted by British commercial interests to justify the opium trade. Ghosh’s historical argument is more overt in this book than in the preceding ones, where it was played out mainly through his characters.  Nonetheless, here too, he uses characters, most especially Zachary Reed and his illicit relationship with Mrs Burnham, to exemplify the transformation of seduction into blackmail,  a metaphor for the way that opium itself lured, then became an instrument of power and coercion.

Even though I admire the historical thoroughness of the book, I did find myself bogged down in the descriptions of battle, even though Ghosh was John Keegan-esque in depicting the visceral assault of the battlefield.  There was a long build-up to the battle scenes as Ghosh rotated between a small number of key characters, and I was on the verge of finding the long wind-up tedious and wishing that he’d just get on with it.

I think that I’ve had enough of the Ibis trilogy, and I suspect from the afterword that Ghosh might have too.  He leaves the door open for other books with an open-ended conclusion, but he seems to suggest that the whole thing is such a huge endeavour that no one person came finish the huge, complex embroidery that he has begun.  I think that’s how I’m happy to leave it: sated, and full of admiration for the narrative and research sweep that he has laid out before us.