Judge Willis Casebooks on the web

The Judge Willis Casebooks website is up and running!

The address is http://historyvictoria.org.au/willis/index.html   You can access it through RHSV’s website, but believe me- it’s much quicker to go directly!

One of the treasures of the RHSV is the Judge Willis Casebooks.  There are twenty-six in total, mostly from Willis’ time in Sydney.  They were one of the earliest acquisitions of the Society,  coming through James Palmer Savage in 1909, with one donated later in 1931 by Savage’s daughter when she found it in the family home.  The website presents the casebooks relating to Port Phillip trials, with a particular focus on the criminal trials rather than civil trials.

The casebooks are Willis’ own notes that he took either during or after the trials over which he presided.  As such, they are rather opaque because they are jottings of what Willis perceived to be particularly significant during the trial.  They are, if you like, a little window into his framing of what he heard.   Most cases start with his summary of the evidence given by each witness.  He notes the questions raised in cross-examination, and a brief summary of the responses. He briefly notes the arguments raised by counsel in summing-up, and any laws and cases they make reference to.  At the end of each entry, he notes the verdict.

To see the notebooks themselves, click on the ‘Transcripts’ section of the site.  There you have a choice- the typed transcripts with a commentary, or scans of the original document. If you click on the scans, you’ll see a PDF image of the book, in all its scrappy, underlined and scribbled out glory.  These are personal working documents, not intended for publication (and in fact, I can’t begin to imagine what Willis would say if he knew…..)

The real strength of this website is that His Honour Paul Mullaly has written a commentary to go with each transcript.  He contextualizes the case and  explains the points of law that Willis has identified.  For the non-lawyers amongst us, this is invaluable.  He has followed up the case in the Public Records Office holdings, and read the newspaper reports that followed the trial.  In this way, he has fleshed out what would otherwise be raw material into a fuller, coherent artefact.

Box 55 is a grab-bag of documents that had originally been placed with the casebooks.  Among other things, it contains his preparation for addresses to the jury, petitions from some of the people who appeared before him and character references.  Justice Mullaly has cross-referenced these loose documents against the case book entries, and again provided a commentary here too.

Under the Support Materials tab, you’ll find some background material on Willis and Port Phillip that I prepared for the site.

The website was launched last night by the The Honorable Chief Justice, Marilyn Warren.  His Honor Paul Mullaly then spoke about his long labour of love in researching and preparing the material on the website, and [here comes some shameless self-promotion!]  I spoke about the transnational career of John Walpole Willis. 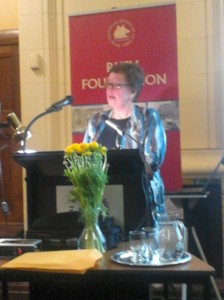 I finished off my presentation by saying :

In these casebooks, we see a hard-working, conscientious judge with his sleeves rolled up.  If you’re looking for evidence of Willis’ career of “follies and consequent disasters”, you won’t find it here…Instead, you’ll find a court at work.  In the sloping hand that filled the pages of these casebooks, and especially through Justice Mullaly’s commentary, you’ll find a judge who had a sharp mind, kept up to date with current developments across the empire, and knew his law.  There are no similar documents from the Canadian or British Guianan phases of his career.  These casebooks shed a unique light, and serve as a reminder that, despite all the controversy attached to John Walpole Willis’ transnational career, he was ultimately a Judge, in a courtroom, with a duty to perform justice.