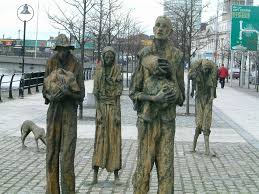 In Our Time (BBC) I downloaded The Great Irish Famine months ago, and finally got round to listening to it today. My knowledge of the famine was largely shaped by Form Five British History back in 1972, and there have been advances in the historiography since then. Being BBC and all that, it was all very British (and not one word of Earl Grey’s Famine Orphan scheme to Australia that Trevor McClaughlin  has researched so extensively in his blog) but I couldn’t help thinking about ‘the caravan’ that has Trump so exercised. A very interesting episode- well worth a listen.

Today in Focus is the Guardian’s podcast service. While cleaning up all the saved podcasts that clog up my phone, I found this episode ‘Heroin and Me‘ where the Guardian’s parliamentary sketch writer John Crace, talks about his heroin addiction when he was in his 20s. He’s the writer who coined the term ‘The Maybot’ to talk about Therese May (who doesn’t seem quite so bot-y now). This is John Crace, not the author Jim Crace, although as you’ll hear, confusion between John/Jim worked in his favour. It’s a very honest

Background Briefing (ABC) I seem to be listening to/reading quite a bit about public housing estates briefly. The Birdman of Surry Hills sounds quite a character, but he has certainly kept the NSW public housing authorities on their toes, taking them to the equivalent of VCAT over repairs to public housing.

Revolutionspodcast.com Mike Duncan is continuing with his backgrounding to the Russian Revolution by looking at Marxism and Bakunism (i.e anarchism). However, because there was an upcoming unavoidable break in his podcast schedule, he decided to add an additional episode before launching into the Russian Revolution on his return (not that this matters to me, as I’m always behind anyway). So, as a bit of an ‘extra’ in Episode 10.7 he returns to the Paris Commune of 1871, which he dealt with in Series 8 in May-June 2018.  Marx, Engels, Bakunin and the International were all around to see the short-lived Commune. In Episode 10.8 The Red and the Black, he discusses the difference between Marxism (Red) and Anarchism (Black). It’s a good summary, but you really need to have listened to the earlier episodes.

Spanish Obsessed. I’m feeling a bit as if I’m cheating on Spanishland School, which is my main online Spanish learning investment, but I’ve also found these podcasts too. They are all in Spanish, at about Intermediate level (which is me, I guess). This one Intermediate 27 The Earthquake is about Rob’s trip to Mexico, where he experienced an earthquake not once but twice in the same trip.