A day trip to …Ormond

To be honest, I wasn’t really quite sure where Ormond is. Having now visited it to see Box Cottage, which was open for History Week, I can now tell you that it’s on the Frankston train line.  Ormond station has been rebuilt as part of the Level Crossing Removal Project and looks quite a lot like Rosanna station except that it is below street level and Rosanna is high above it. I guess that there will be a legacy of these concrete and stainless steel stations, with their orange and limegreen geometric ‘decorations’.

North Road Ormond is rather unprepossessing.

We had lunch at Mountains of Bears, and it was excellent. It’s located down a little 1950s arcade with tables outside in the arcade, as well as in the cafe. We had an excellent paella- better than I had in Spain and much closer to home. They took a great deal of care with their coffee art.

We had ventured down to Ormond to visit Box Cottage Museum, which houses the City of Moorabin Historical Society.  The cottage has been reconstructed after falling into disrepair on the adjoining block. Another house had been built in front of it, and so it stayed at the back, used as a shed in what had by 1970 become a timber yard.  The timber yard owner, Mr Lewis suggested that the cottage be dismantled and relocated. It was reconstructed in the adjacent park as part of Victoria’s bicentenary, with timbers donated by Mr Lewis.

The original owners were William and Elizabeth Box, who arrived in Melbourne in 1855. At first they leased market garden allotments before they purchased two ten acre lots on what had been the Dendy Special Survey in 1868 and 1869. The cottage was built sometime in the 1850s.  They were successful market gardeners and raised 13 children in the cottage before building the larger house at the front.  From 1917-1970 it was occupied by the Reitman family who leased and then purchased the houses and land. August Reitman was a monumental mason, potter and sculptor, and was employed to carve war memorials in Victoria after WWI. His business shifted to Highett and the cottage was used as a workshop. 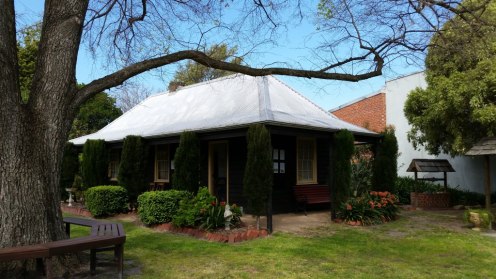 There is also an outside barn area with agricultural and household artefacts, including an original wagon that took vegetables from the market gardens to Melbourne. Because of the sandy road, a sort of tram line was built into the roads to assist the wheels on heavily laden drays.

Box Cottage was open today for History Week, but it generally opens on the last Sunday of the month between February and November between 2.00 and 4.00 p.m.