‘Wicked but Virtuous: My Life’ by Mirka Mora 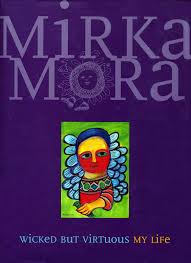 The artist and matriarch of a clutch of artistic Mora sons, Mirka Mora is a Melbourne institution.  Earthy, twinkly and eccentric, she often pops up on documentaries to provide a bit of a shock when such naughtiness and carnality slips from the lips of a woman well into her eighties.  Her autobiography, narrated in the same tangled-syntax and lightly-accented giggle that bubbles out of her interviews, is roughly chronologically ordered under a number of themes: My Paris, My Melbourne, My Restaurants, My Work, My Men, My Children, My Workshops etc. As she tells us at various times in the book, she is not particularly comfortable with the idea of writing an autobiography. Much of it is drawn from the journals that she wrote at the time, most particularly in the catch-all chapters that intersperse the narrative ‘Pele-Mele: a Medley’ and ‘Inselbergs, Motets and Quodlibets’.

Mora’s childhood in Paris during WWII, as the Jewish daughter of a French resistance fighter, was marked by fear. Through her father’s contacts with the resistance, Mirka and her mother were released from a French concentration camp prior to their deportation to Auschwitz. Her parents separated and divorced shortly after the war.  But Mirka’s was already an unconventional upbringing when, even before the war,  she was in effect handed over to a young woman in the same apartment block who took a shine to her, and left her for extended periods of time with her own mother in the countryside. When the 17 year old Mirka  met Georges Mora, another resistance fighter, after the war she married him so that he would make love to her.  After emigrating to Australia, they owned a succession of restaurants and Georges became an art dealer.

While I knew that she was an artist, and an unconventional one at that, I hadn’t realized how deeply embedded she was in the contemporary art scene in Melbourne during the 1950s and 1960s- or at least she was, in her telling.  The book is a succession of ‘names’ and slyly-told anecdotes and I found the constant name-dropping rather tedious.  So too the exhaustive and rather obscure lists of books she had read and which, to be frank, I don’t really see reflected in her work.  There is an ambiguous whimsy/grotesque aspect to her paintings, and flipping through the pictures inserted into the middle of the book, there is a sameness about much of her work (or is it a working out of a strongly defined theme?)  I tend to think of her in the same category as, say, Michael Leunig.  I’m not sure whether I’ve just praised or damned her.

I’m bemused by the way that this book managed to be open – particularly about bodily functions of various kinds- and yet quite opaque as well.  And yes- I know that I’m being hypocritical here because I often bemoan the tell-all memoirs that drag a parent’s secrets into the harsh light of day (e.g. here and here). I don’t know whether it was from a sense of delicacy that she skated over any real discussion of her husband and sons, or whether it was because she wanted the spotlight for herself because, as she would admit herself, she does have a very healthy self-regard.

I think that the part of the book that affected me most was a hand-written letter from Mirka to her womb, which was removed by hysterectomy in 1993. A rather quirky, perhaps macabre undertaking, but one which captured for me a sense of comfort and wistfulness in her own femaleness. The letter just hangs there, in the closing pages of the book, unremarked.

The book is generously illustrated with photographs- ye gods, she was a beautiful young woman!- and reproductions of her paintings.  I was aware of a recent undiscovered mural in the former Cafe Balzac restaurant (owned by the Moras) that was under threat but I couldn’t really think of any others, especially after reading her chapter on public commissions.  She wrote that she had completed a mural at Flinders Street Station – and, after racking my brains over where it could possibly be- here it is!  I must say that it is more striking than I realized, and a real gift to the people of Melbourne. 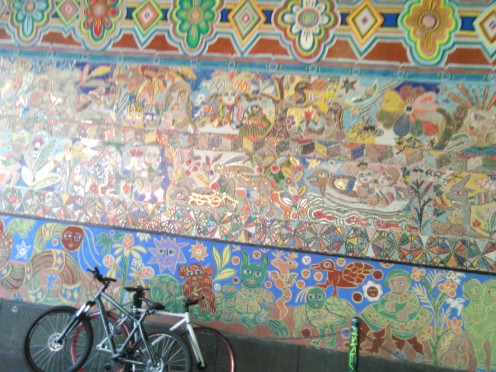 On finishing the book, while rather fond of this small, puckish character, I felt  underwhelmed and almost cheated by her autobiography.

Other reviews: Lisa from ANZLitlovers reviewed this and seem to like it even less than I did.

I’ve posted this on the Australian Women Writers Challenge website.