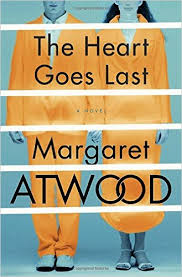 I’m really not quite sure what to make of Margaret Atwood’s recent book The Heart Goes Last. It fits into the ‘dystopian fiction’ genre that she explored in The Handmaid’s Tale and Oryx and Crake which, although set in a recognizable but off-kilter future, explored human themes as well as sociological and ecological ones as well.  The Heart Goes Last  seemed to start in a similar vein, but became almost a futuristic farce as she piled one scenario onto another until the whole edifice threatened to fall down.

It all started recognizably enough. Stan and Charmain (we never learn their surname) were living in their car, having lost their home and well-paid jobs in what we would recognize as the 2007 global financial crisis. Living in their cramped car, tired, smelly, and frightened of marauding gangs, they jump at the chance to join the Positron Project which offers them a stable job and a fully-furnished house in the town of Consilience – half of the time.  The other half of the time they are prisoners in the Positron jail, a large prison complex that is the major economic driver of Consilience. Not that Sam and Charmain are criminals, and nor are most of the people in the jail.  The real criminals had been gradually weeded out earlier. What was more important than guilt or innocence was that they were consumers of prison services, and you don’t need to be a prisoner to do that.  So that the facilities are fully utilized, their house is occupied by their ‘alternate’ couple who have signed up for the same deal, shifting in and out of the house/prison arrangement.  So far so good, as far as I am concerned: there’s whole country-town economies in Australia based around jails and detention centres.  It is when both Charmain and Stan, independently, become infatuated with their alternates, that things become more complicated.

While taking her turn in prison, Charmain’s job involves the dispatch of bound and drugged prisoners, which she does with as much gentleness as she can without thinking too deeply about what she’s doing.  Stan is charged with looking after the Positron Project poultry farms, turning a blind eye to the men who pay to have sex with the chickens.  ‘What???’ I think, as Atwood lays down one of her farce cards.  Positron runs many enterprises out of its prison complex, including the manufacture of sex-bots, made to look as authentic as possible- evoking shades of the ‘synths’ in the recent television program Humans;  or built as Elvis or Marilyn Monroe look-alikes. But Positron goes further, pioneering surgery on living women to wipe their memories and ‘imprinting’ them onto their purchasing lovers, much as baby chickens are said to be imprinted, ensuring that they are completely loyal and acquiescent lovers.  ‘What???’ I think, as Atwood lays down yet another farce card.

I guess that this was my problem with this book. I’d go along quite happily, and then Atwood would just put one more element into the scenario, tipping it over into parody. Apparently it was written as an online serial, and perhaps that accounts for the feeling I had that Atwood was just playing with the reader, escalating the implausibility and adding yet another thing. Perhaps the need to keep stacking on the shocks is one of the perils of the serial genre.  To have a faceless corporate conglomerate leveraging the prison system for profit, and it becoming an end in itself, would have been enough for me.  I didn’t need the sex-bots, the sexual imprinting and the kinky sex as well.

3 responses to “‘The Heart Goes Last’ by Margaret Atwood”