Don Watson ‘QE63 Enemy Within: American Politics in the Time of Trump’ 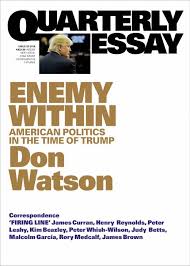 It might seem strange to Americans that  Australia’s premier long-essay journal devotes a whole issue to Donald Trump (and I can’t see the interest being reciprocated in reverse) but as in other countries across the world, many Australians – and particularly those of Quarterly Essay persuasion- are horrified at the idea of President Trump.  So, too, is Don Watson, as he makes clear in this essay.

Don Watson wrote American Journeys eight years ago (see my review here) and he repeats, on a smaller scale, the methodology he used in that earlier book.  However, instead of criss-crossing America to explore its political and cultural paradoxes, Watson limits himself in this essay to the state of  Wisconsin.  However, his findings are similar on a smaller scale: that within the one state there can exist multiple Americas, and that American politics reflect this splintered reality.

Within the state of Wisconsin, there is Milwaukee, hollowed out by the collapse of American industrialisation. White Americans now number 37% of the population (half of what it was in the 1950s); Latinos a four-fold increase to 17% and African Americans making up 40%. Milwaukee votes Democrat, but the white-flight suburbs surrounding it are a staunch Republican voting block, fired up by prosperity evangelism. They are the support base  of  the current governor Scott Walker, who believes that God has chosen him to cut taxes and stop killing babies.

Then, in the same state, there is Madison – and how many books have I footnoted ‘University of Wisconsin- Madison’?- a university-dominated town with art galleries, museums, and the Capitol building.  Madison was the seat of Robert La Follette who took on the elites, the railroad trusts, the lumber bosses, the corporations and stood for an expanded democracy, guarantees of civil liberties, the right to form unions and against “any discrimination between races, classes and creeds”. (p. 28) It is this strain of American politics that responded to Bernie Sanders for whom, I suspect, Don Watson would vote  if he had the chance.

There are now, Watson claims, two red parties and two blue parties, and “the whole country has come to resemble a battleground, albeit one, like the Somme for long periods, in stalemate.” (p 3) The underlying truth is that “the United States is a concatenation of sulky tribes, provincial, ignorant and seething with ambition, frustration and resentment”. (p 4)

While not discounting the possibility of a Trump victory completely, Watson abhors the thought.

Clinton just has to win. If she loses, not only does the world get Donald Trump (and the US Supreme Court his appointments): the Democrats will have to live forever with their decision to make their nominee the most qualified presidential candidate in history, but also the person most disliked by the American public and possibly the only one that Trump could beat. (p. 66)

Clinton is, Watson says “a fully fledged, and some would say dangerous, foreign policy hawk with no demonstrated ability to think beyond the doctrine of exceptionalism to which she subscribes as a matter of faith” (p.62) But she has also, through Sanders’ presence, been pushed towards the progressive side with promises to invest in cities to lift people out of poverty, invest in infrastructure, create jobs, revive manufacturing and raise the minimum wage, with immigration reform, an end to student debt and paid family leave. (p 64).  And this, perhaps, is cause for cautious optimism.

Reawakening the old grassroots reformer deep inside could not only heap manifold blessings of the nation and consolidate a liberal Democratic ascendancy; it is surely alsO the best antidote to the dark forces now feeding on the country’s malaise. (p. 67)

This Quarterly Essay probably does not add much that is new to the commentary that Paul McGeogh has been providing in the Fairfax papers, or Guy Rundle in Crikey. It is good, however, to read an extended-length reflection on the American elections, even if it feeds into our despair over a decision that will affect us all, and upon which we can have no influence whatever.