When I woke at 4.30 a.m. this morning, I decided that I may as well get up, leave even earlier and catch the first paper for Session 1, as I’d arrived late the other days. So, for the 99.9% of the world who are not likely to catch the 5.20 a.m. train from Macleod to Southern Cross, I can tell you that, unlike the 6.33 Macleod train which has many slightly sleep-befuddled office workers, the 5.20 carries a healthy contingent of construction workers in high-viz jackets. I just thought you might like to know.

Many of the sessions and morning teas/lunch were held at the Mechanics’ Institute. 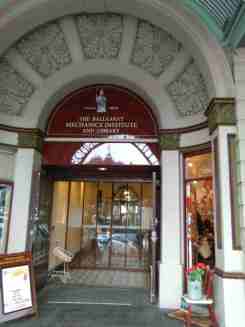 The inside of the hall has been recently renovated. I can only assume that the paintwork is using original colours because it’s -um- an ‘unusual’ colour selection:

There has been a strong environmental history stream running throughout the conference and so I decided to room-hop between adjacent rooms where presentations dealt with different creatures and their environments.

First, David Harris gave his paper “At a Brisk Simmer: Commercial Fishing in Nineteenth Century Victoria 1860s-90s.” As he pointed out in his introduction, this is only a sliver of time within the longer history of the Gippsland Lakes area, which had long been a fishing site for the Gunaikurnai people (albeit a relatively recently formed area, given that Bass Strait did not exist until 8000 years ago). Within the long term, the decline in fish numbers post-settlement could be seen as a slow catastrophe, or as historians have described the collapse of the Newfoundland fisheries “managed annihilation”. However, focussing on this small time period of 30 years provides a context for political decisions, enlarges the scope for considering individuals, and reveals complexities in what might seem a relatively benign period during the nineteenth century. During this time, there was the influence of the acclimatization movement, the rise of commercial fishing and the development of the fresh fish trade. But it was also a time in which fishing became less diverse as indigenous and Chinese fishers were excluded and the market shifted from dried fish- as happened elsewhere in the world at this time. He reminded us that even the ‘old timers’ amongst white settlers and fishers had only been there for thirty years. The cyclical appearance of the pilchard shoals was not yet understood, leading to anxieties about shortages and abundance. These anxieties prompted a political response as the government introduced commissions and regulations, thus privileging political approaches over scientific ones.  Reminding us of the influence of individual people within this political context, he  gave the example of William Carstairs, a Scots immigrant who had shifted to the Gippsland Lakes and often served as a spokesman for the fisher in government inquiries before he died, fittingly enough, in a fishing accident.

At this stage I went next door, into a room that seemed to be serving up its own environmental context with a heating system that delivered warmth but only at the cost of a noisy, escalating whirlwind. I arrived to hear the end of Andrea Gaynor’s presentation “Taking Locust Country” where she noted the use of military metaphors in the “war on locusts”, including defensive action against a hostile invader, coordinated surveillance and mobile strikes, and in a 2010 outbreak, adopting the language of the war on terror and exhortations to be ‘alert’ (and although they didn’t say it) alarmed.

Katie Holmes’ presentation on “Mallee Mice” had many in the audience squirming, which verified her contention that mice, despite their size and furriness, often evoke a strong emotional response  and unsettle the human psyche. She focussed on the 1917 plague in the Mallee, where mice thrived in the well-drained soil, the cleared land and the rainfall after a period of drought. Mice were fierce competitors for the much-celebrated bumper wheat harvest that year, but they have a material presence: not only do they yield underfoot (shudder) but they disrupt the human order as they collapsed wheat stacks and invaded houses. She noted the gendered response to the plague as men in Mallee towns competed over the size of the piles of dead mice, and as women despaired of the domestic invasion.

She shared this vision of the 1993 mouse plague with us. During this plague the density was five times the official definition of plague- i.e. 2500 mice per hectare, when the plague definition is 500 per hectare.

It was interesting to note the response amongst the audience to her descriptions, pictures and videos of swarms of mice which, although they spread disease and attacked livestock, are a short-lived plague that does not have the same health consequences as malarial mosquitoes, which were discussed in Emily O’Gorman’s paper “Irrigation, Insects, Infection: Mosquitoes and the Murrumbidgee Irrigation Area, NSW in the Twentieth Century”. During the period 1916-1945 there were five inquiries into mosquitoes in irrigation areas, three of which she described in this paper. Malaria is a medical phenomenon that challenges many binaries: it requires both humans as host and non-human mosquitoes as vectors for the disease to spread; it challenges the border between temperate and tropical climates, and it pushes the boundary between agriculture and nature as the dangers of the wetland came into the home. There was particular anxiety about soldiers, who were slated for settlement in the Murrumbidgee area, bringing malaria with them as they returned from overseas service; and the 1916 study looked at whether the area itself was malarial. It concluded that the danger of malaria from returning soldiers could be averted by careful screening.  Another study in 1919 found eggs of the anopheles mosquito in pools, and particularly noted the danger of small collections in water in hoofprints from cattle.  Although concluding that the prospect of a malaria epidemic was unlikely, the study recommended the elimination of small pools and their incorporation into flowing water instead. After ricegrowing was introduced, anxiety was again raised over such large bodies of water, especially with the return of the WWII soldiers onto soldier settlement blocks in the Murrumbidgee region. This time the study recommended the use of DDT.

This plenary was auspiced by the Australian Victorian Studies Association, and was very well attended. Joseph Bristow from UCLA (Los Angeles) is a prolific scholar, who has written and continues to work on Oscar Wilde, and is currently working on a reconstruction of the two trials that led to Wilde’s imprisonment. In his fascinating, witty paper, he described a police raid on a party hosted by John Watson Preston in his rooms at 46 Fitzroy Square, London, where twenty men were arrested, including two, Arthur Marling and John Severs, dressed in women’s clothes.It was not so much a party as a commercial enterprise  which extended over two days, to which tickets were sold.  Marling, along with two other attendees at the party, Charles Parker and Alfred Taylor, were later to play a role in later episodes which drew attention to the prevalence of homosexual blackmail, which was often concocted between groups of men against wealthy victims. At the Old Bailey in April 1895 thirty-three year old Taylor was charged with Oscar Wilde for conspiring to commit, and committing, acts of gross indecency, while Parker served as a witness to the Crown Prosecutor’s case against Wilde. A case belonging to Taylor contained incriminating letters that were used as evidence against Wilde, and during the trial Wilde was questioned about the Fitzroy Street arrests (even though he was not there himself). Although, as we know, Wilde paid heavily for his ‘crime’ neither Parker nor any of the other male sex workers were charged after admitting to committing the crimes of which Wilde was accused. Bristow drew on newspaper reports of the time, and noted that the provincial newspapers provided much fuller coverage than the London press.

What a fantastic nineteenth century reading room there is in the Mechanics’ Institute! Although the institute opened in 1860, this reading room was apparently part of the trading floor of the Mining Exchange. 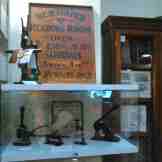 I had hoped to attend the ‘Negotiating Aboriginal Histories’ session, but it had been cancelled. I was starting to flag after my very early start, so I decided that this would be my last session for the conference. I again skipped between two sessions.

Tamson Pietsch spoke on “Bodies at Sea during the Migration Boom 1850s-1870s”, which was based on an article which she has had published in the most recent issue of the Journal of Global History (Journal of Global History / Volume 11 / Issue 02 / July 2016, pp 209-228). Picking up on Braudel’s observation that ‘the sea’ is not one monolithic entity but that different seas have geographies of their own, she also notes that there is a chronology of the sea as well, most particularly the shift from sail to steam and the attendant changes in labour and ship design. Using Foucauld’s work on disciplining and rendering docile the body, she draws on shipboard diaries written by eight passengers en route to Australia to argue that oceanic journeys disrupted and upended the land-based bodily practices that passengers embarked with.  There was the management of time, which passed slowly on board ship (at least for cabin and saloon passengers; steerage passengers had to work much harder just keeping body and soul together).  Indolence, especially in the tropical zones, evoked fears of idleness, and so ‘useful’ activities, including diary writing itself, were devised.  Then there were the bodily boundaries that were violated by the very close proximity with strangers and the noise and smells of human life, and the intrusion of lice and rats.  Finally, passengers on these journeys became conscious of the fragility of authority once the boat had left shore. Power was embodied in the Captain, who had the authority to punish in public, and to a lesser extent in the Cook, who could make life difficult if he so chose. She finished by asking what effect this disruptive experience of bodily chaos and breakdown of boundaries had on passengers once they landed – especially when considered against those they had left behind at ‘home’.

The final paper was not delivered by the author. “Revisiting Clunes: Race Riot or Fight for the Eight Hour Day” was written by Lynn Beaton, and delivered posthumously by a friend after Lynne died suddenly in June 2016.  The Clunes riot of 1873 has often been described as an anti-Chinese riot, but her paper argued that it was instead part of a campaign against scab labour.  The owners of the Lothair mine wanted their miners to work Saturday afternoons but the miners, who were contractors rather than wage employees, refused to do so (thus hurting their own hip-pockets, rather than the mine-owner’s). Ballarat, along with the rest of Victoria, was proud of the achievement of the Eight Hour Day, and working on Saturdays would have compromised that.  When the mineowners brought in Chinese to work on Saturdays, riots broke out and five miners were arrested.  She argued that anti-Chinese feeling was a component of the riot, but the issue was about protecting the Eight Hour Day.  Lynn’s paper was read by a friend, and her family was in attendance. You could not help but sense the sadness. It reminded me, as so many of the papers at the conference did, that history is- as Katie Holmes said in launching Tom Griffiths’ book- a collaborative, interlocking process. It’s what historians do, and why we love it.