‘Savage or Civilized? Manners in Colonial Australia’ by Penny Russell

You may remember a number of years back when Prime Minister Paul Keating had the audacity to place his hand on Her Majesty’s back to gently steer her in a crowd.

He was quickly dubbed “The Lizard of Oz” by the English press, always quick to jump on colonial brashness with a snort of derision at ex-convict temerity (a taunt which carries little significance in Australia itself).  Historically, however, the colonial/convict trope was far more influential, as demonstrated in Penny Russell’s book Savage or Civilized? Manners in Colonial Australia.

This book is about the complicated rules and the even more complicated lived experience of colonial manners (p 5)….Manners are not only about the different observances of form and ritual that make a past (or a foreign) society seem quaintly strange.  They are also about the ways we acknowledge and respect the humanity of others, extending due consideration to their feelings, preferences, prejudices and sense of how things should be done.  The ultimate rudeness is to deny a fellow human being that degree of consideration. (p. 14)

Not everybody cared about manners, but this book concentrates on those who did.  It explores what she calls four ‘contexts’: the pastoral frontier; convict society; the domestic world and the new public space that opened up in the the latter part of the nineteenth century.  The book is not necessarily chronological, as these ‘contexts’ were continuous throughout the late eighteenth and nineteenth century time period, but there is nonetheless a chronological trajectory in the narrative.  She describes this as “layered” rather than chronological, and is at pains to stress that she is not discussing the rules of civility as spelled out by the imported ‘politeness’ literature that flooded the empire, but instead looks at

how manners affected the daily lives of individuals, how they played out not in principle but in practice, not in precept but in people. (p 13)

In other words, the sort of history I enjoy most. 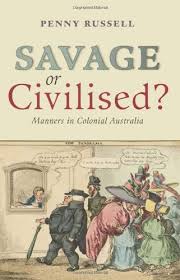 In Part One, she starts on the frontier, that site of colonial theatricality so well explored in Inga Clendinnen’s Dancing With Strangers.  Handshakes, in particular, are the focus of attention (as they are also in Tiffany Shellam’s Shaking Hands on the Fringe). In each section, she presents a small number of characters to exemplify the arguments she is making, almost as if she is bringing them onto the stage for us.  Robert Dawson was an employee of the Australian Agricultural Society who was viewed as a “good man” and the author of The Present State of Australia in 1830 where he sought to rescue the reputation of Indigenous people at Port Stephen. It was, however, a respect overlaid by paternalism, praising docility, tractability and goodwill- and in the final analysis, he took their land. Neil Black, on the other hand, felt adrift within the moral wilderness of settler society, rejecting the commonly-held premise that a young gentleman could break out of the expectations of his class and status and then take them up again at will.

Part Two, “High Society”makes the point that British manners were themselves evolving at the beginning of the 19th century. Although there was still a belief in a social pyramid, this view was challenged by the rising bourgeoisie and evangelical domesticity which placed great store on reputation, good name, and ‘credit’.  The networks between the colonies ensured that this strategically reimagined ‘England’ was a common reference point as the colonies erected their own strictly-policed social boundaries to mirror what they conceived to be the situation at ‘home’.  Government House in the colony served as a microcosm of these relationships , as Russell demonstrates with the example of the much-studied Lady Jane Franklin in Tasmania (a theme she also explored in her book This Errant Lady which I viewed here.)  When Sir John Franklin fell out with his private secretary Alexander Maconochie, it not only caused a split in society, but also leached into the personal relationships within the domestic sphere, as the two families lived in close proximity.  Professionalism was another arena of conflict, as she shows with her example of two doctors: Dr Farquahar McCrae (the brother-in-law of Georgiana McCrae in Port Phillip) and Dr William Bland, an emancipist who had been transported to the colonies for a duel.  When the two doctors disagreed about the appropriate treatment for a patient, the dispute was played out through the newspaper columns of the Sydney Herald, spilling into a meeting of the Benevolent Asylum Society, one of those philanthropic organizations through which middle-class men underscored their respectability.

Part Three examines ‘Domestic Worlds’, and while I found this an emotionally engaging section, I did find myself wondering whether enough was made of the effect of colonialism on domestic relationships.  This was not so much with the dissatisfied governess Margaret Youngman, who reminded me of Sybilla in My Brilliant Career, which was itself an Australian working of the governess story.  It was more with the the story of Mary Ann Tankard who was deserted by her older, often-absent husband, and the wife of the Reverend Andrew Ramsay who was left behind to ‘keep up appearances’ while her husband sailed back to Scotland to deal with church business. Both these stories of desertion could have easily been mirrored by deserted women in England.

The final section moves more into the second half of the nineteenth century and the burgeoning of a public and  political sphere where women and aspiring working men  became more visible.  Transport and urbanization brought the courtesies of meeting strangers to the forefront of public discourse, especially for ‘girls’ during the 1890s.  The fiesty Annie Britton, who was arrested for parading in the volunteer uniform of Captain Gilbee, brought the captain’s family into the public arena, while the arrival of the Duke of Edinburgh brought colonial manners under the censure of the ‘home’ reading public- or at least, it was imagined that it would-just as Paul Keating was to do 130-odd years later. In the midst of the celebrations Henry Parkes, chair of the organizing committee, stepped forward to shake the Duke’s hand.  Parkes was himself of dubious background and doubtful morality given the indecent haste with which he married his mistress after his first wife’s death, and the new Governor the Earl of Jersey and his wife later ensured that the new Lady Parkes was excluded from Government House.

As Russell notes in concluding her book, hers is not a discussion of ‘real’ Australian values and nationalism- not then, and not by historians later. Instead, these carefully and sensitively drawn people and their dilemmas and social and domestic dramas

…were telling representations of the hundreds of thousands of individuals who moved into, and sometimes out of, the Australian continent; tiny atoms in the sprawling world of settler colonialism, but constituent atoms nonetheless.  At the end of the nineteenth century, as much as at its beginning, many if not most colonists understood themselves a privileged members of the Anglo world, and yearned to blend unnoticed with a cosmopolitan community upon terms of cultural and social equality, not to be marked out an uncouth barbarians or brash colonials. (p. 259)

My review is linked to the Australian Women Writers Challenge site.

It’s also 1/20 of my TBR20 Reading Challenge- my vow to read twenty of the books I already have on my shelves.

8 responses to “‘Savage or Civilized? Manners in Colonial Australia’ by Penny Russell”