‘The Narrow Road to the Deep North’ by Richard Flanagan 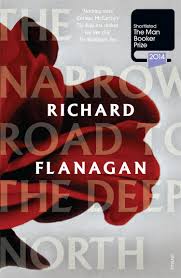 There are spoilers in this review

I haven’t been writing this blog long enough for it to capture my deep admiration for Richard Flanagan. Only his recent book Wanting has made it into this blog.  Over the last twenty years I’ve read all his books, with the exception of The Unknown Terrorist, which I have on my shelves and which may surface as part of my #TBR20 challenge (once I start it!). For me,  Gould’s Book of Fish is right up near the top of my list of best Australian novels.  So I was delighted that Flanagan won the Booker Prize for this book, although I must admit that my praise of it is not completely unalloyed.

The main character in The Narrow Road to the Deep North is Dorrigo Evans, met in the opening pages as an elderly, famous doctor, lionized for his role in tending to the men on the Burma Railway.  He is uncomfortable about the acclaim that has attached to him but not enough to eschew it completely.He enjoys women and has had a series of extramarital affairs throughout his life. He doesn’t really like himself very much.  One’s mind turns immediately to  ‘Weary’ Dunlop – the iconic war-hero doctor of the Thai-Burma railway-  although I’m in no position to know how closely the fictional book parallels the real-life.

We follow Evans from his childhood in Tasmania, his move from humble beginnings  into ‘society’ as the handsome young medical student and then his sudden encounter in a bookshop with Amy- a young woman who, he later learns, is his uncle’s wife. Interwoven with this love story is the muddy, oppressive heat and downpours of the Burma jungle as Evans,  now a Prisoner of War, is placed in an unsought leadership position because of his medical skills.  He holds the power to order men to stay in the rudimentary camp hospital, but he is forced into a nightmarish bargaining ritual with their Japanese captors who demand men to work on the railway.

Flanagan is a writer of images, and in all his books (and particularly in this one) he luxuriates in the visual and the visceral.  We can envisage the gnarled gums that the young Dorrigo sees above him as he lies back in a horse-drawn dray, jolting through the bush as he joins his older brother in a bush camp.  We see the golden dust-motes swirling in the still air of a first-floor bookshop when he first sees Amy; we hear the sigh of the waves outside the beachside pub that Amy manages with her husband.  We can see – and our imagination flinches away from –  the mud, pus and shit of the Burmese camp.  Parts of the book are disturbingly violent: so much so that I found myself unable to sleep after reading some sections of it.

The book is consciously literary, with small extracts of Japanese verse separating the different parts of the book. The Japanese guards are monsters: the Japanese guards are also cultured men.  It is this paradox that he explores in the latter part of the book, as the war ends and somehow these men- both Australian and Japanese- are somehow meant to rejoin life again.  Memory smooths and distorts; men on both sides grapple with questions of goodness and evil.

I mentioned that my praise is somewhat tempered in this book.  There are too many coincidences, and too much squeezed into the last quarter of the book. Flanagan himself in interviews said that he had started with the scenario of two people who had been lovers long ago catching sight of each other in a crowd, and I felt as if this scenario, which appears near the end of the book,  was a writing exercise in its own right.  So, too, the bushfire scenes near the end felt like a self-contained piece of descriptive writing, undertaken as a set piece and not particularly germane to the narrative. I found that the ending was messy- almost as if Flanagan wanted to tie everything up and yet couldn’t quite bring himself to bring the book to a close either.

That said, these are just qualms and not at all the demolition job that Michael Hofman unleashed in the London Review of Books.   No-  I was overwhelmed by the bigness of the book and its themes.  The love scenes were tender, physical, and finely crafted, and so too, paradoxically,  were the war scenes: both part of being human.  In interviews, Richard Flanagan seems to think of this as the book he’s been driven to write, all along throughout his writing career. I think he might be right.