Cooking up a storm for Cooking for Copyright

Here’s my little contribution to Cooking for Copyright Day. 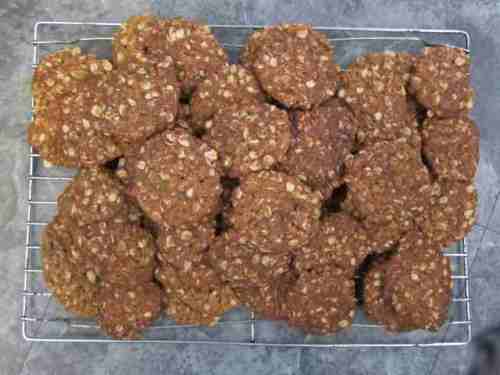 They’re Ruby Borrowdale’s Rolled Oat Biscuits and the recipe made mountains of the things.  As you’ll see, Ms Borrowdale has given us a very…um….stripped-back recipe consisting merely of ingredients with nairy a mention of method or cooking instructions. (was there another page I wonder?) I melted the generous quantity of butter and added it to the other ingredients and cooked at 180C for about 12 minutes.

So who was Ruby Borrowdale and why I am posting a picture of her biscuits? (not cookies, note!)  Ruby Borrowdale was Queensland’s best known cookery expert.  From 1932 she was the Chief Instructress, and later the superintendent of the test kitchen at Simpson Brothers, well-known Queensland manufacturers of flour and baking powder. Simpson Brothers published an annual cooking book featuring their baking products.  The John Oxley library have produced a video on Ruby and their collection of the Borrowdale papers.

She also wrote a weekly cooking column under the name of Patricia Dale for the Brisbane Telegraph and wrote columns for other regional  newspapers. If you do a Google search, you’ll find much reference to her book The Golden Circle Tropical Recipe Book which I can only imagine would be the source of much merriment today for its imaginative use of pineapple rings and beetroot  (as you can see in this blog here).  She also featured on the radio and was the first Queensland cook to appear on television.

But why my sudden interest in Ruby Borrowdale and Queensland cuisine? Ruby Borrowdale’s recipes are featured as part of the FAIR (Freedom of Access to Information and Resources) campaign today regarding the status of unpublished manuscripts in Australian libraries, museums and historical societies. Unlike in other countries, in Australia,  copyright on unpublished sources lasts forever.  As a point of comparison, in Canada and New Zealand it is the life of the author plus 50 years and in the EU generally it’s the life of the author plus 70 years.  In the UK, works unpublished by 1989 whose authors died before 1969 will be in copyright until 2039, and otherwise it is life plus 70 years.  In US it is also life plus 70 years, or 120 years where the author is unknown.

FAIR are campaigning for all published and unpublished works in Australia to have the same copyright term, in line with international norms.  As part of their campaign today, they have broken copyright by posting recipes on their website and ask people to bake them and photograph their efforts  — hence the rolled oat biscuits above.  Of course, ironies abound:  the YouTube video above was produced by the John Oxley library which holds the Borrowdale collection and uses images of published works but none of their manuscript collection. And, strictly speaking, given that Ruby Borrowdale died in 1997, her works would still be in copyright anyway (although she may have granted it to the library perhaps?).

Ah, but it’s all a new world, isn’t it, and this provision is ridiculous and out of line with international practice.  So, please,  have a biscuit or two for Cooking for Copyright Day.