There’s a lovely small, free exhibition of pre-Raphaelite paintings on show at the National Gallery International until  12 July.  The exhibition exemplifies the fallacy in trying to carve off ‘Australian’ from ‘International’ art because it includes artists like Edward La Trobe Bateman (in Australia between 1852-69) and Thomas Woolner who worked in Australia in 1852-4 after arriving for the gold rush.  He, like Bateman, associated with the Howitt family who were the centre of cultural Port Phillip in a reminder to us of the transnational nature of artistic and cultural interests.  Many of these works- particularly those of William Holman Hunt, Dante Gabriel Rossetti, Ford Madox Brown and Edward Burne-Jones- were purchased as part of the Felton Bequest.

The Pre-Raphaelite Brotherhood was a group of artists in the mid -19th century who eschewed the current trends in art and the increasing industrialization of production, and consciously turned to older styles of painting and imagery – hence dubbing themselves ‘pre’ the painter Raphael (1483-1520). Many of their works, created in the last half of the 19th century harked back to a quieter medieval milieu and a mythical forested, European setting. They marked their paintings with a small PRB logo in the corner. They came to the attention of the wider public through their illustrations of Tennyson’s poetry which was itself steeped in the mythological realm. Reproductions of their works were circulated throughout the Empire, with the Maitland Mercury noting on 26 September 1885 that a reproduction of Holman Hunt’s “The Shadow of Death” on show in a shop window had formed the basis of the local vicar’s “very eloquent” sermon. 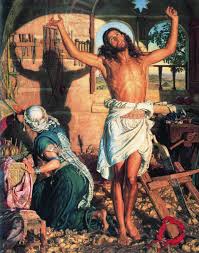 An unusual window display for Maitland – Holman Hunt’s ‘The Shadow of Death’. I wonder what they were advertising?

When we were in Birmingham we heard a lecture about Lizzie Siddal, whose long red hair and pale, thin features adorn many of these paintings, and she (and others visually similar to her) can be found in several of these paintings. As well as paintings and sketches for paintings, there are woodcuts, furniture, photographs, book bindings and wallpaper produced by the PRB, marking the extension from painting into the decorative arts and production methods, especially through William Morris’ influence with his company, Morris & Co.  Men predominate, of course, but there are photographs by Julia Margaret Cameron

We downloaded a PDF of the wall-panel labels used in the display before visiting, which I thought would be a good way of avoiding having to cluster up close to the painting, squinting at writing in the dark before moving back to view the picture. Unfortunately there seems to be no order at all to the PDF- or at least, I couldn’t detect it, and it seemed to be completely unrelated to the layout of the exhibition. A good idea poorly executed.

All-in-all, it’s a lovely little exhibition that reminds us of the riches that the Felton Bequest has brought to Victoria.