A little trip to Phillip Island

One of the real advantages of Steve only working four days a week is that every weekend is a long weekend.  We’re taking advantage of the beautiful autumn weather to take a weekend down at Phillip Island.  Yes, THAT Phillip Island which Matthew Guy is getting all het up about. My, he’s as cross as patch, isn’t he?  I think he doth protest too much.  Something very fishy about it all, I reckon.  What a joke that IBAC can’t investigate politicians.

Nonetheless, I really don’t know why we don’t come down here more often.  It’s only 90 minutes from Melbourne, on freeways the whole way.  It really is quite beautiful.

We’re staying at a Genesta B&B in Cowes. Very nice it is, too.  Full marks for having a top sheet and summer blanket that can be used instead of the pretty but stiflingly hot doona.  I can’t work out why more places don’t do the same. 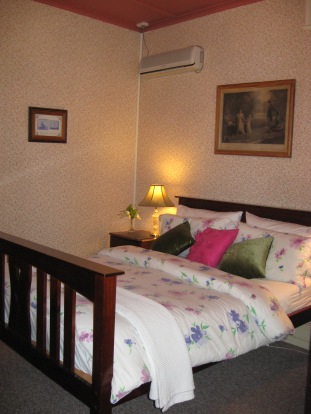 It’s on a quiet side street that abuts onto Westernport Bay, about three minutes walk away.   Have you ever wondered why Westernport bay is actually located east of Port Phillip Bay?  That’s because Bass, who named it, did not venture any further west than this before heading back up along the eastern coast.  This bay WAS west of the coast that he had charted.  Apparently the Bunurong name for it is Warn’marring.   Given that Westernport Bay is east of  Melbourne, that would be a pretty good case for renaming it, I reckon. 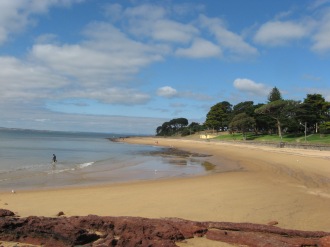 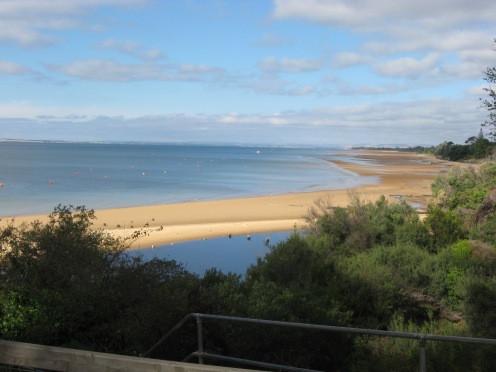 If you’ve been to Phillip Island (and most people in Melbourne have been at some stage), you’ll probably remember the Isle of Wight Hotel overlooking the pier. 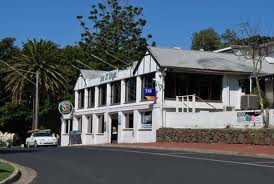 Rather ordinary, I must admit, but I saw photographs of it at the local Historical Society this morning, and it was originally a mock-tudor hotel built in the early 1930s.  It was rather attractive, and reminiscent of the guest houses that used to be in Marysville.  It was built to replace an earlier wooden hotel that had been on the site and burnt down.

Well, it ain’t there now.  The site has been empty for four years.  Is that a burning rat I smell? 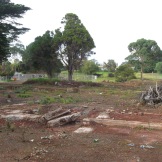 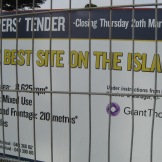 Yep, it probably is the best site on the island 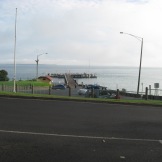 Whatever they build there will have quite a view

Phillip Island is well known for its penguins and koalas.  It’s a very popular destination for bus tours of international tourists who want a day trip to see furry animals.

We went to see the Penguins last night.  I can’t quite remember the controversy over the Seal Rocks Centre or whatever it was…something about Jeff Kennett?  Well,  whatever it was then, it’s now a huge slick place full of shops and merchandise  and cafeterias.  Still, the penguins are the real show.  The lights on the beach are dimmer than I remember them being, and you sit in two large ampitheatres facing the sea. At first you can’t see the penguins at all (although you can hear them), then they seem to just materialize out of the waves.  They huddle in a little cluster like shy, giggling, stagestruck toddlers, they scuttle up in a group into the sand dunes.  There were three main groups of them that we saw- there may have been more, but we decided to leave by then.  The sky was clear and the stars magnificent.  I was rather proud that I was able to identify Mars when it rose.

Then today over to Churchill Island.  It’s a beautiful, tranquil spot.  Thank you, Dick Hamer, for purchasing it for us all.  Lt. Grant established the first farm there in 1801 although they can’t locate the exact site. Now surely that’s  a 3-day job for Time Team, I reckon- the first white agricultural site in what is now Victoria?  The first permanent settlers between 1860 and 1866  were Samuel and Winifred Pickersgill, but he lost possession of it in a card game.  It was taken over by John and Sarah Rogers who lived there until 1872, when it was purchased by the successful stonemason and ex-Lord Mayor of Melbourne Samuel Amess. He built the holiday house that is the main building there today.  You can read more about the history of Churchill Island here.  I must dust off my copy of A.G.L. Shaw’s The History of the Port Phillip District when I get home and re-read those first chapters. 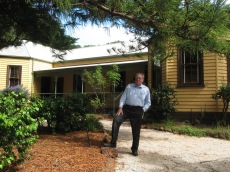 Steve outside the Amess house 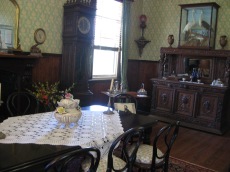 A moonah tree. The Bunurong saw them as as sacred 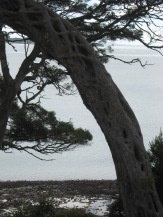 The moonah trees have unusual trunks. They look almost as if they are plaited stone. 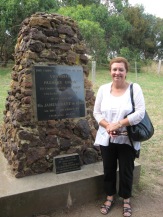 Beside a cairn celebrating Lt. Grant and his wheat crop 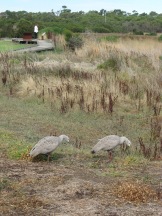 Some Cape Barren geese. You see them everywhere

2 responses to “A little trip to Phillip Island”