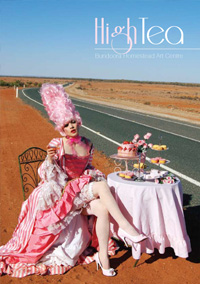 What a hoot! We went today to see “High Tea” before it closes on 6th February at the Bundoora Homestead Art Centre.  The publicity on the web page describes the exhibition thusly:

A social ritual, the ceremony of high tea is comprised of a series of gestures governing things such as; the way tea should be stirred, the direction of a teapot spout, and the proper way to eat a scone!

High Tea explores the social, political and cultural role of high tea in contemporary culture. What has compelled and sustained this seemingly rigid practice throughout the centuries, how has it evolved and developed as a tradition that is still cherished today?

The artists present unique interpretations of this practice through various mediums and methods – glass, paper, textiles and smell! Each installation sets out to provide a contemporary appreciation of high tea.

We weren’t really quite sure what the exhibition would be, but we saw that there would be a dance installation at 1.00 pm and unsure of even what that was, we tottered along. It took a little while to realize that the performance (is that the right thing to call it?) was actually underway as we wandered around the space, partaking as the sign suggested of a scone, jam and cream in return for a gold coin donation, and then wondering if perhaps we’d misread the sign and were EATING the exhibition! How embarrassment that would be! There’s buttons to press, peepholes to squint through, a wall of cupcake papers that seemed to take on a beauty of their own and an installation of recorded admonitions (“say thank you”) that made you squirm with the memories of being squashed between grown-ups and being on your best behaviour.

Across in the main gallery itself are several displays- photographs, knitted cakes,  doodled doileys and paper cakes.  My favourite exhibit was a room redolent of the smells of high tea- one long sniff of different smells that you might encounter at a high tea in 1910 compared with its counterpart in 2010.  I’m a very smell-y person (as in ‘highly olefactorily attuned’ if there’s any such expression) with smell an integral part of how I experience the world and deeply embedded in my memories.  Smell is always part of how I perceive any work of art – the smell of the paint, the cleaning products used in the gallery, the still air-  and I absolutely relished having it consciously prodded and teased in this exhibit. 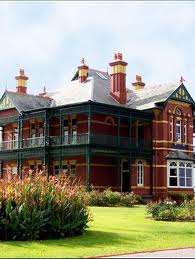 Have you heard of the Bundoora Homestead Art Centre? It’s a beautiful Queen Anne-style homestead in Bundoora which at the time was prime horse-racing stud territory.  Suburbia has crept up around it, but it would have once commanded a wonderful position- you can see the city,  the Dandenongs and the Macedon Ranges from the nearby Mt Cooper lookout.  Its most famous equine resident was Wallace, the offspring of the  legendary 1890 Melbourne Cup winner, Carbine.  In his three year old season in 1895 Wallace himself won the Caulfield Guineas, the Derby, was beaten in the Melbourne Cup but on the following Saturday dead-heated to win the C. B. Fisher Plate.  He won the 1896 Sydney Cup,  but illness forced him to retire.  He then stood at stud for 22 years (!!), siring progeny that competed in 949 races, winning nearly a quarter of a million dollars in prize money.  For those with a paranormal bent, there’s a story that on a dark night the sound of hooves can be heard around Wallace’s grave in the adjacent Bundoora Park.

But wait, there’s more! Those of you who have followed this blog  will know that one of my little interests is to find six degrees of separation between Judge Willis (the REAL Resident Judge of Port Phillip) and – well, anything you might like to name.  This one is easy- the original owner of Bundoora Park was John Matthew Vincent Smith, the only son of John Matthew Smith.  And who was he, you ask?  John Matthew Smith arrived in Port Phillip in 1839 and took up employment as a law clerk with Horatio Nelson Carrington.  There was certainly no love lost between Willis and Carrington, who was one of the ‘Twelve Apostles’ financial ring,  and Willis’ disdain extended to John Matthew Smith as well, whom Willis described as

So, if the “High Tea” exhibition  or Bundoora Homestead itself, Wallace’s grave and even if the ghost horse don’t tempt you to venture out to Bundoora, the sure knowledge that you’re only two degrees of separation from John Walpole Willis will surely do the trick.

This entry was posted in Port Phillip history, Six degrees of separation between Judge Willis and .... Bookmark the permalink.