‘The Night Watch’ by Sarah Waters 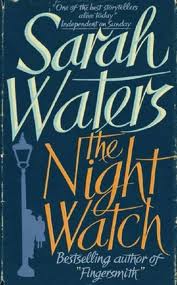 What a good book!  And what an encouraging way to start my reading for 2011 with a book that I gobbled up eagerly and closed with regret at the end.

I’ve read two other works by Sarah Waters: Fingersmith and Tipping the Velvet. While I very much enjoyed them, I wondered if Waters was becoming bogged down in lesbian faux-Victoriana.  When I read that she had broken with 19th century London to move into Blitz Britannia,  I was rather relieved but again a little frustrated that it was yet another narrative with lesbian main characters. But  I know that I should not feel that way, especially when I’m in the hands of a such a sensitive and nuanced author. Many authors that I enjoy have made a particular type of story their own- Dickens with his mosaic carnival of characters; De Lillo with his America; Anne Tyler with her domestic family narratives, and I don’t at all begrudge them another book in a similar vein.  And in my own life experience over the last few months, I’ve come increasingly to sense that what really matters is love and relationships, irrespective of time, politics, country, milieu and the genders of those involved. Every life is a love story of one sort or another- and the variety is endless; or else it is a tragedy.

Waters’ narrative revolves around four main characters: Kay, Helen, Viv and Duncan. Her master stroke is to tell the narrative backwards, starting in 1947, then 1944 and finally 1941. It’s a risky technique, though. As a reader there is none of the backgrounding that you come to expect and you are forced to draw your own hypotheses about the characters and how they came to be in the situations in which you originally encounter them.  At 171 pages the opening 1947 section is relatively long to sustain such uncertainty, and there is a drabness about the post-war England it portrays and the flatness of her characters’ lives.

The 1944 section is the real heart of the book, both in terms of length and in character development, and many of the questions and suppositions raised in the first section are spelled or dispelled here.  Her attention to historical detail is assured and deft, and it’s at this point that a book either wins me over or turns me off.  As I’ve often commented, I squirm when an author overloads the narrative with the cargo of historical colour and movement uncovered by too much research: on the other hand, I rebel when anachronistic sensibilities are ascribed to the characters in historical fiction.  Here Waters excels: there was only one point at which the historical detail became suffocating (it was one product-placement of Max Factor too many, I’m afraid), and by writing from a lesbian sensibility she risked, but avoided, the danger of violating the integrity of a historical fiction narrative by framing it with a 21st century mindset.  There is a timelessness about desire, fulfillment, betrayal and loss, in both mixed and same-sex relationships. It was always there, even if it was not written about at the time.

The 1941 section is short, barely 50 pages, and it provides the context that was withheld in the first section.  Somehow, by this point, it no longer matters and you find yourself nodding, as if you already understand.

I found this an absolutely satisfying book.  I’m drawn to stories about the Blitz, and although I do not know enough to judge objectively,  I had a sense that she had captured an emotional fidelity to the time.  Is it too soon, I wonder, to mark this as one of my top reads for 2011?