Grace Lisa Vandenburg is an unemployed teacher on sick leave after a breakdown triggered by a young boy’s accident in the schoolyard.  But Grace’s problems lie deeper than this: she counts obsessively and incessantly, as a way of trying to control her world and all around her.  Into this ordered and tense life comes Seamus, who is attracted to her humour and quickness, and steers her towards therapy and medication as a way of overcoming her obsessiveness.  We lose our perky, wisecracking, passionate and controlled narrator as the medication submerges her into a slow, passive inertia. Will she lose the medication or lose or her man? Or both?

This is all the stuff of good chick-lit, in this case bolstered by clever use of narrative to reveal the personality change that Grace undergoes as a result of her medication.  In this regard, it reminded me of Daniel Keye’s short story Flowers for Algernon, which was picked up as the film ‘Charly’.  I think that this use of narrative voice to denote change is one of the real strengths of the book, along with a main character who is not just sassy but also sees the world quite differently.  The book also introduced me to Nikola Tesla, a Croatian engineer who was likewise driven by the need to count, but for him it ended in madness.  The book explores the often narrow line between habit and obsession;  routine and ritual; self control and control of others; passivity and strength; eccentricity and madness.  In these regards, it steps out of the chicklit genre into something more complex.

But Toni Jordan has not been served well by her publishers, methinks.  There are several versions of the front cover, and none really does justice to a book that is more than just chick-lit.

Here’s the American version.  Who the hell is Emily Giffen? Thank you Wikipedia-  Emily Giffen is obviously the Queen of Chicklit. Her insightful blurb  calls it “A delight”. I hope that no-one offered their first-born child in exchange for such a glowing endorsement.  I wonder if her books are so nuanced?  And in case you think it’s a primary school textbook- a not unreasonable assumption really-  the cover helpfully labels it as ‘A novel’. 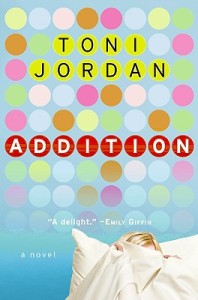 The English version has a little pun – “A comedy that counts”.  The lemon tart is nice and cheerful- but surely it should be a flourless orange cake sprinkled with poppy seeds- if you’ve read the book, you’ll know why. 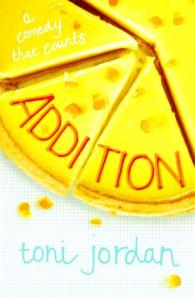 There’s a second UK cover that sticks with the pun on counting: this time “Some people count more than others”. 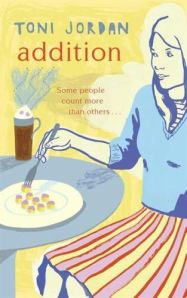 One of the covers available in Australia resembles this British one, but with a sassier girl who looks more like a model and less like a schoolgirl.  The blurb cites The Age’s recommendation:  “A winning love story”. 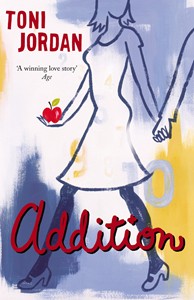 Then finally, there’s one that perhaps gets closer to the tone of the book.  Sigrid Thornton (much loved of Sea Change) endorses it as “A stylish, witty and moving love story”.   But as the Resident Husband commented “Since when has Sigrid Thornton been a book reviewer?”  Maybe I should keep an eye on my toothbrush, lest it also get up to shenanigans. 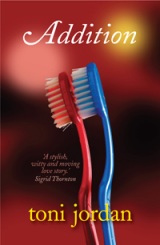 There is a happy ending in this feel-good, romantic fiction book, and it’s good fun, engaging and heartwarming.  I gobbled it up, and shut the book with a smile.  I think we can all do with a bit of this, in small doses.  And, of course, only as part of a well-rounded reading diet.