How do you like your history? Sliced or threaded?

A couple of days ago I finished reading Australians 1838.  This book is part of a series of reference books published for Australia’s Bicentennial in 1988. As well as a dictionary, atlas, book of statistics and separate bibliography, each volume is devoted to a ‘slice’ of Australia’s history at 50 year intervals- 1788, 1838, 1888, 1938 etc. 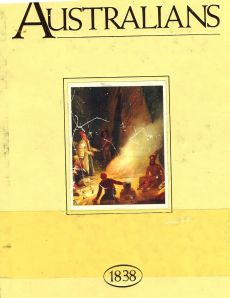 The process of developing these books is almost as (if not more!) interesting than the final product.  The project did not receive money from the Australian Bicentennial Authority, relying instead on funding from research grants and university support.  The project involved literally hundreds of scholars, and in the case of the 1838 volume, spawned its own accompanying journal ‘The Push from the Bush’ which took on a life of its own.  Although described as a ‘collaborative history’, closer examination of the contributors to specific chapters shows that the main authors were Alan Atkinson, Marian Aveling, and  S. G. Foster, along with sections by Lyndall Ryan, Joan Kerr, Richard Neville, Beverley Earnshaw, Margaret Anderson, Barrie Dyster, Jillian Oppenheimer, Frank Broeze, Sandra Blair, Rob Linn, Frances O’Donoghue, Mimi Colligan, Elizabeth Windschuttle, Elizabeth Webby, A. J. Rayer, Laurel Heath, Tony Rayner and Martin Sullivan.  And who said you can’t write history by committee?

By deliberately adopting a ‘slice’ approach, the series steps out of the mould of the “traditional Australian catechism” of Convicts, Squatters, Gold, Land Acts, The Kelly Gang, The Anzacs, The Depression and World War II.  As Alan Gilbert and Ken Inglis wrote in the Preface:

By writing about one year in people’s lives…historians could avoid creating the most common illusion conveyed by narrative approaches: that history is a stream, carrying people towards a predetermined destination clearly visible to us, if not to them.  Slicing through a year, we might hope to see and hear people living as we do, taking some things for granted- the sun rises and sets, the seasons pass, people grow older- but at the same time surrounded by choices and uncertainties.  We might recognize people more easily as our own kind if we met them living out the daily, weekly, seasonal, annual and biological rhythms of their lives; and we would certainly understand them more fully by grasping the truth that the future that beckoned or alarmed them was not necessarily our past- what actually happened- but rather a hidden destiny, a precarious vision of probabilities, possibilities and uncertainties. p.xiii

I’m not sure that this rather subversive view of history is actually realized by the book. It certainly achieved a panoramic view of what it was to live in 1838, but the sense of contingency, false starts and misconceptions doesn’t come through particularly strongly.  As a reader, it felt rather blinkered by focussing just on the one year with no  antecedents and consequences- there was no scope for that very human act of  wondering what happened next.  It was if the book was shut with a resounding clap and a “no more now, time for bed!”

I do, too, find myself wondering about the intended market.  In Macintyre and Clark’s 2006 (2nd edition) book The History Wars, the series is noted as being marketed as a heritage item, in terms of its design, production values and cost.  The reason that I read it was to find an insight into what it was to think like an 1838 Australian ( a rather anachronistic concept- more correctly, NSWman, Van Diemen’s Lander, South Australian and West Australian).  Why would anyone else read it?  It doesn’t have a strong narrative thread: nor is it a reference book per se.  It is beautifully produced with copious and lavish pictures.  Perhaps it’s intended to just sit on the shelf??

Which brings me to a different way of taking one’s history- threaded.  I see in Saturday’s Age that the National Museum is again in the news- this time, with the second iteration of the multimedia display ‘Circa’, a revolving theatre that leads from the entry foyer to the museum’s interior.

A controversial review of the museum by sociologist John Carroll , also described in The History Wars and Graeme Davison’s chapter in Macintyre’s The Historian’s Conscience (2004), criticized this particular display as a “paradigm for what is weak in the parts of the museum that are weak, in that it leaves confusion rather than clear, engaging narratives…. It’s far too much a jumble of snatches of opinion, one after another, which have no coherence together…”.  As Katharine Murphy notes in the Age article:

The new version can’t be accused of failing the chronology test.  It ties up 40,000 years of Australian history in a neat narrative bow, highlighting key elements of the museum collection- Phar Lap’s heart, the Banks Medallion featuring botanist Joseph Banks, and the prototype handmade Holden from which all modern Holden cars descent- in an effort to connect the visitor more directly to the place, rather than engaging them with a more abstract, and at times political, discussion about the experience of being an Australian. The contrast between the old and the new, on any analysis of tone and substance, is stark.  There is now a clear beginning, middle and end, and a location of history in time and place.

I would feel a little more comfortable about this if Howard’s cultural warriors on the National Museum Council (headed by Liberal Party president Tony Staley,  John Hirst, Howard biographer David Barnett and right-wing columnist Christopher Pearson) felt a little less comfortable.  I’m not opposed, however, to the importance of chronology and narrative- it’s something that I’m grappling with in my own telling of Port Phillip.  I’m very much aware of the need to have ‘befores’ and ‘afters’ in the way that we, as humans, impose a narrative structure on events.  I’m fascinated, in Judge Willis’ case, by the distortion of time and distance in the Colonial Office’s attempts to manage what was, after all, a personnel crisis in one of their overseas branches.

But the ‘neat narrative bow’ of this display disturbs me.  It sounds rather like an advertisement for the ‘must-sees’ of the museum- perhaps it’s not necessary to go any further but just sit on the floor and watch what you could see without all the walking? Perhaps I shall just have to bestir myself and hie myself hither to Canberra to see it for myself.