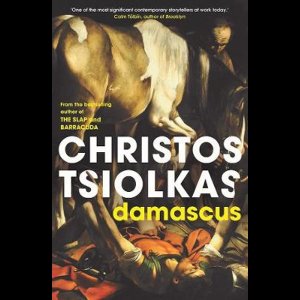 This book has received a lot of hype and good reviews, but I don’t know if I really like Tsiolkas’ work much. I was lukewarm about The Slap and I was confronted by Dead Europe, which I read before I started blogging.

Damascus is similar to The Slap in that it has interwoven narratives that jump back and forwards in time. At the same time, the sordidness and physicality of the book reminded me of Dead Europe. However, overlaying this is the presence of lots of research – a year’s worth, Tsiolkas claims- that somehow clags up the narrative at the same time as making it visible in your mind’s eye.

The book is told in separate parts, without chapters, although the text is separated by scene break icons.  It’s a hard book to find your way around, and there is no table of contents.  It starts with Saul in 35A.D.; Lydia in Antioch in 57 A.D. (the only female narrator) in a long 86 page chapter titled ‘Hope’); Saul II in 37 AD; Vrasas the prison guard in Rome in 63 A.D. in a Chapter ‘Faith’; Saul III in 45 A.D.; Timothy in Ephesus in 87 A. D. in a chapter titled (you guessed it) ‘Love’; and Saul IV in 57 A. D.  The Saul sections are narrated in the third person present tense; the other sections in the first person present tense.

Tsiolkas captures well the political status (or lack thereof) of the early Christians in a Roman society, and clearly portrays the philosophical/political differences that emerged within the first generations of the dispersed Christian community. Saul, Thomas and Timothy are the main characters, whose relationships were interwoven with doubt, intransigence, Jew/Gentile/Roman hostility, with an undercurrent of mostly repressed homosexuality.  There is a lot of violence in the book, with Roman punishments graphically described, and a lot of mud, shit and blood.

Probably what disappointed me most was the feeling that I was reading a historical fiction from the 1940s or 1950s – think Lloyd C. Douglas’ The Robe (1942) or Taylor Caldwell’s Dear and Glorious Physician from 1958.  Or more recently, perhaps Colleen McCulloch’s First Man in Rome which was as far as I got through her Masters of Rome series before I gave up because of the muddy writing and poor editing. I can’t complain about the editing in Tsiolkas’ book, but there was a dusty, old-fashioned turgidity about this book too, spiced up though it was with the sexuality and physicality that you might expect from a Tsiolkas book.

Frankly, my high expectations were a bit disappointed.

5 responses to “‘Damascus’ by Christos Tsiolkas”