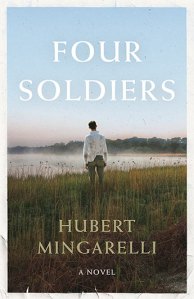 I must confess that I borrowed this book solely because of Hilary Mantel’s blurb ‘A small miracle’ on the front cover. I’m not so sure about the ‘miraculousness’ of the book, but it certainly is small at only 155 pages and could probably be better described as a novella than a novel.

It is set in 1919 in the Russian Civil War. As winter sets in, the Red Army commanders break up their regiment, turning them out into the winter landscape to fend for themselves until the weather improves and the fighting commences again. Four soldiers – Benia, Pavel, Kyabine and Sifra – set off with their tent (a rather poor defence against the ravages of winter) and establish a camp near a lake. Here they live day-by-day, a quiet self-contained peaceful existence in the midst of war, with the prospect of returning to battle hanging over them.

Benia, the narrator, is closest to Pavel, with whom he often walks at night when Pavel is disturbed by nightmares. Kyabine is a large, not very bright Ukrainian, whom they brought along soley for his brute strength in a harsh environment. The title is a misnomer, because there are in fact five soldiers when they are joined by Kouzma Evdokim, a young peasant recruit. He says that he is going to write their story in his notebook, and they are anxious that his words capture the truth of their experience.

The story is very simply told, with short sentences. The translation feels very clean and precise. The chapters last only a couple of pages, almost like a film script. Very little happens, even though the narrative is infused with a sense of dread.  Its simplicity and precariousness makes it a more memorable read than it would be otherwise.