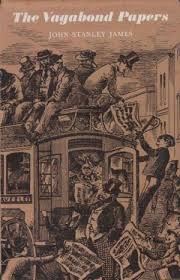 John Stanley James (1843-1896) , a.k.a ‘Julian Thomas’ and ‘The Vagabond’ was a journalist, originally of Staffordshire England, who ended up in Australia and the New Hebrides. His most famous articles were written in Melbourne in the 1860s through to the 1880s, where he worked under-cover in what we would now call immersive journalism, which was published in a number of newspapers, most notably the Argus. I hadn’t heard of him, and neither had Jill Giese who featured him in her The Maddest Place on Earth (see my review here) but he has been on historians’  and journalists’ radars for some years. He has even been inducted into the Australian Media Hall of Fame!

The version I read of this book was published in 1969 with an introduction by historian Michael Cannon. It has been recently republished by Monash University Press, with the original 1969 Cannon introduction supplemented by additional essays by Robert W. Flippen and Willa McDonald. I had heard podcasts of their presentations to the RHSV (see my review here), so having heard about their discoveries about James’ life, I felt comfortable enough with the older edition where Cannon signposts the very absences that Flippen and McDonald were to fill. 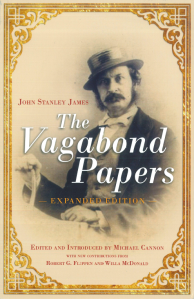 The chapters in this book are taken from his newspaper articles that deal with Melbourne and Sydney only,  illustrated by sketches from Punch, The Australasian Sketcher and the Illustrated Australian News. They have been arranged in six parts, reflecting their content.

In Part 1 ‘Down and Out’, James visits the places where the indigent gathered, often working ‘under-cover’. He pretends to be an outpatient at the Melbourne Hospital, where it takes him four attempts to be attended. He visits the police court (as Helen Garner was to do 140 years later) and visits the refuges and services offered. He compares the lodging houses in Melbourne and Sydney,  and writes about the Waifs and Strays of Sydney where his writing evokes Charles Dickens. He eats at a Sixpenny Restaurant and goes to the Melbourne General Cemetery to witness pauper funerals.

Part II “Life in Prison’ draws on his four-week undercover assignment at Pentridge Prison, where he works in the different divisions of the jail. In  Part III ‘Middle Class Morality’ he turns his attention to the churches including fashionable Scots Church in Collins Street, under Rev Charles Strong (who later formed the Australian Church), the suburban parish church of South Yarra and the bazaar at St Luke’s Church Emerald Hill. He turns a jaundiced eye to ‘Sabbath Breaking’ in Sydney at the theatres and bars.

Part IV ‘Cold Charity’ takes him to the Immigrants Home, the Benevolent Asylum, the Sailors Home, a Ragged School and fostering-houses for neglected children.  He picks up on this theme in Part VI ‘The Demi-Monde’, where he goes to the Magdalen Asylum at Abbotsford (now an artistic and cultural centre), and a Protestant Female Refuge in Carlton.  In Part V ‘Manly Sports’ he describes a football match and boxing rounds.

He often sets up oppositions within these chapters, where he compares organizations of different sectarian and social hues.  His language is often racist, with particular disdain shown for Jews and Chinese. It is disconcerting to hear his praise of the Magdalen Asylum, given what we now know about them, but his writing is very much of its time. In spite of this, his humanity, concern for the ‘underdog’ and his scorn for hypocrisy and cant shines through.

It was only when the end of the book was approaching that I realized that I hadn’t read the one thing that I had borrowed the book for- his expose of conditions in the Kew and Yarra Bend asylums. They are not included, and so I had to turn to the original newspaper sources instead through our wonderful Trove. It was interesting reading them in their newspaper format instead of the reader-friendly reproduction of his articles in book-form in ‘The Vagabond Papers’. (If you’re looking for them, they are in the Argus No I 22 July 1876; No. II 29 July 1876; No. III 5 August 1876; No. IV 12 August 1876; No. V 19 August 1876; No VI 26 August 1876). It made me realize how unaccustomed I am  to reading long-form journalism, especially with such small font and narrow columns.

I’m really pleased that I have met ‘The Vagabond’. He was years ahead of his time in his journalism, which is vivid and engaging, giving a good (if colourful) picture of Melbourne and Sydney from the bottom-up.  And what a fascinating personality, full of contradictions!