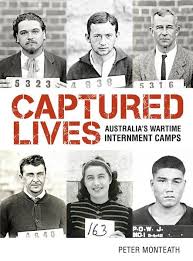 Six faces stare out at us from the front of Peter Monteath’s Captured Lives. For me, the most striking is the young woman at centre bottom, her curled hair caught up into a scarf, smiling as she holds up a hand-written sign reading ‘163’. She was Maria Vagarini, the wife of an Italian fresco painter who had been arrested and interned in Palestine before being sent, along with her husband, to Australia during WW2. Up in the top left hand corner is Anton Gueth, a German Buddhist monk, interned in Ceylon and sent to Australia during WWI.  On the top right hand side, in suit and tie, looking like an earnest bank teller is Karl Moeller, the captain of a German ship captured during WWI. Below him on the bottom right is Hajime Toyoshima of Japan, still bearing the facial injuries he sustained when his aircraft was shot down over Darwin on 19 February 1942.

The variety of these photos, from both world wars, of combatants, naval officers, pilots and internees, reflects the diversity of those who ended up in Australia’s wartime internment camps. In this book Monteath explores the range of people who were deemed to be threats to Australia’s security:  those who were born in Australia to ‘foreign’ parents or who held suspect political views, others captured as part of military activity (e.g. the naval officers and seamen on the Emden in WWI and the Kormoran in WW2) and others who were part of the circuit of POWs being shifted from one country to another among the Allies as the war-front changed.

The book is divided into four parts: WWI, the two aspects of WW2 captivity (i.e. ‘enemy aliens’ and Prisoners of War) and the final release after WW2.  The text is broken up with vignettes of individuals, which keeps the emphasis on the fact that internment happened to real people with prior histories, who went on usually to live out their lives with these years of internment just one part of their longer life story.

In both WWI and WW2, the act of internment was facilitated through legislation. During WWI it was the War Precautions Act of 1914 which was introduced in the early months of the war, and in WW2 the National Security Act of 1939. During WWI, everyone was called a ‘prisoner of war’, even though many in the camps were naturalized citizens who the minister of defence had reason to believe were “disaffected or disloyal” (p.12). Some men submitted themselves for internment because, if their families could make a compelling case of financial adversity, their families could claim a meagre allowance. Most were German, Austro-Hungarian or Bulgarian, with a few Turks. They were not required to work, but they often chose to do so. At first there were internment camps in each of the states, but over time these were consolidated mainly in New South Wales.

Between the two wars, the Geneva Convention had spelled out the distinction between internees and prisoners of war, and as a signatory Australia respected this policy during WW2 and arranged access for  Official Visitors (often judges), the Red Cross and YMCA. During WW2, internees were provided with food and accommodation which from 1940 onwards was provided through large purpose-built camps, usually in rural areas, in each state. For German and Japanese nationals, their  governments made provision for ‘pocket money’, which involved the swearing of allegiance to the German or Japanese government, a practice which surprised me. It did not extend to Australian internees whose German, Italian or Japanese origin had brought them under surveillance.  Internees were not allowed to work, and many found the boredom onerous. However, ‘enemy aliens’ who were not interned could be required to work, and in labour-hungry rural Australia, Italians  in particular were in demand for agricultural work. They were channelled into the Civil Alien Corps and although not behind wire, they were subject to a strict regime as they were viewed as a flight risk.

Prisoners of war were sent to Australia from Allied theatres, and indeed there were more prisoners of war than internees.  They could be used for labour, as long as it was not on war-related activities and on condition that they were paid, fed, accommodated and treated the same as civilians. They might be prisoners of war, but class still counted, and officers were accommodated separately. The  German naval survivors of the Kormoran, which sank the Sydney with such a huge loss of Australian life, were accommodated in Dhurringile mansion, in Victoria (now a minimum security prison). Japanese prisoners, however, were always treated with distrust, and were rarely allowed outside their camps.

For POWs of all nationalities (Australian as well), escape was “the legitimate act of a man imprisoned”  and the punishment for attempted escape was relatively mild (p. 202). However, Japanese attitudes to the shame of capture and imprisonment were quite different to those of Italians and Germans, as evidenced by the huge loss of 234 lives when Japanese prisoners broke out of Cowra POW camp.

After the war, it took some time to clear the camps. They were not allowed to stay in Australia, even if they wanted to, but had to return home and could then re-apply to come to Australia.  Quite a few did; others picked up their lives at ‘home’, whether it be in Australia or overseas.

This book is not about the present-day internment of refugees on Manus Island, but their shadows are everywhere: in the discussion of international conventions, and in the descriptions of boredom and lost, listless years of indeterminate imprisonment.  This book describes policies and provision, but its focus is just as much on people – something that current refugee policy tries its best to obscure.  We see these wartime internees through their life histories, through the photographs that, surprisingly, they were allowed to take within the camp, and through their sketches and paintings – all of which are distributed generously throughout the book. We see these WWI and WW2 internees far more clearly than we see Manus Island internees today, despite the ubiquity of social media and mobile phone cameras.   The final paragraph of Monteath’s book in particular evokes present-day events, and stands as a warning:

This absurdity of the detention of men like these, of condemning otherwise productive lives to unknown months and years of isolation and desolation, echoes through the history of Australia’s home front in the two world wars. More than that, it speaks to the twenty-first century and to the ever-present danger of allowing unfounded fears to stain the lives of prisoners and their captors alike (p.239)

Sourced from: Review copy from NLA Publishing through Quikmark Media