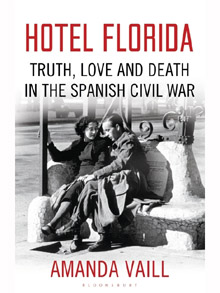 I read this book solely because I was going to Spain. Beyond what I’d read in Ghosts of Spain, I knew very little about the Spanish Civil War beyond Guernica, the idea of it being a dress-rehearsal for WWII and the participation of writers and intellectuals who went there to fight. So I have no opinion either way about the completeness of Vaill’s account, her felicity to the sources and the robustness of her argument.  I leave all that to historians of the Spanish Civil War. I read it just “because”.

In her author’s note, she notes “Hotel Florida is a narrative, not an academic analysis”. However, as the lengthy notes at the end of the book show, this is a heavily researched book, steeped in the sources. The linchpin of her narrative is the once-deluxe Hotel Florida, a hotel in Madrid, frequented by government figures and journalists.  The six main ‘characters’ of her book all stay there at one time or another: writer Ernest Hemingway and journalist Martha Gellhorn, war photographer Robert Capa and Gerda Taro (you can see some of their photographs here) , and press officers/censors/propagandists Arturo Barea and Isla Kulscar. These three couples are all real-life people (even though I confess only to being familiar with Hemingway and Gellhorn). She draws on diaries, letters and the published works of her characters, and you sense her picking the gems from other people’s words.

The book proceeds chronologically, from the first uprisings of Franco and his troops against the republican government, and traces through the departure of the republican government to Valencia, and the eventual overrun of Franco’s forces.  It moves its focus from one character to the other, as they shift between Spain and Europe and America. There’s a shifting cast of other writers and celebrities, drawn to Spain as well, including Eric Blair (George Orwell), Dorothy Parker, Antoine de Saint-Exupéry, – why, even ‘our’ Errol Flynn turns up.

I don’t think that at any time I ever lost an awareness that this was a non-fiction book. She is not just relating facts: she shapes an argument as well. She emphasizes the Soviet influence on the republican government, she is suspicious of the veracity of Gellhorn’s reportage and she doesn’t have much time for Hemingway. Her sympathies are overwhelmingly with the loyalist republicans. She looks at the relationships between the couples as well.  Hemingway dangles Gellhorn as his ‘bit on the side’, relishing the scandal but afraid of his wife; the Capa/Taro story is probably the most affecting of the whole book; while Barea and Kulscar are buffetted by the political winds that make commitment to any side dangerous.  Although she focuses on these three couples, who to a certain extent sweep across the fighting as observers rather than participants, Vaill does not let the reader forget that this is an actual war with bombings and many, many deaths.

I don’t know whether this book is ‘good’ history or not. A review in the Guardian by Paul Preston criticizes its Cold War tone and reliance on suspect sources.  While ‘narrative’ in tone, it is not novelistic as such, but more a group biography told through a kaleidoscopic lens. I feel that I came away with a much better understanding of the Spanish Civil War- at least, from the republican side. As for whether her analysis of the Soviet influence is correct or not- I leave that to others. I just read it “because”.