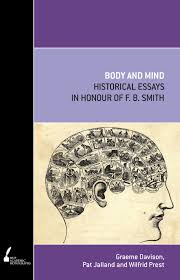 What an unexpected delight! I borrowed this book when I was working on Catherine Helen Spence a few months back, because I wanted to read Susan Magarey’s chapter about Spence’s domestic life.  In addition to Margarey’s chapter,  I found a collection of fascinating essays written by academics who worked alongside or as graduate students of ANU historian Francis Barrymore (F.B) Smith, a historian of whom I’d largely been unaware, I thought.

Smith, who was born in Hughesdale, was a history of British and Australian history: indeed, he believed that Australian history should be studied as part of the British world. His own publications straddled both British and Australian contexts on themes of political action,  freethought religion, medicine and public health. These interests can be seen in the chapters of this book, which arose from a festschrift by his former students and colleagues to which he reluctantly agreed.  He died in 2015 and one of his former students and one of the editors of this collection, Graeme Davison, wrote this obituary. Several of the essays allude to his grumpiness and scepticism but also to his enthusiasm and encouragement.  Without fail, each of the chapters testifies to his contribution to the intellectual development of the various authors.  And what a list of authors! At the back of the book are listed the PhD students he supervised including  among many others, Graeme Davison, David Walker, Janet McCalman, Susan Magarey (nee Eade), Joy Damousi, Frank Bongiorno, Michael Roberts, Craig Wilcox, Malcolm Wood, Janet Doust and Barbara Dawson, nearly all of whom I have read at some stage and many of whom have appeared in this blog.

So- what of the chapters? Graeme Davison’s chapter looks at James Kay, whom I didn’t recognize until I remembered  Kay-Shuttleworth  the public health reformer (who I must confess I thought were two separate people). His chapter ‘Sociology and Self-Knowledge’ combines an analysis of Kay’s reform work alongside his love interest in Helen Kennedy, the daughter of one of his most influential patrons.  It is followed by Michael Roberts’ chapter ‘Politics and Public Health in the Age of Palmerston’ which explores political action and reform and the role of research and philanthropy. I really enjoyed Alex Tyrell’s chapter ‘A ‘Cold Water Bubble’? The Mid-Nineteenth Century British Water Cure and its Adherents’ which examines hydropathy, the cold water treatment, and its relationship with mysticism, quackery, alternative medicine and public health. Joanna Burke, from Birkbeck College UCL, author of An Intimate History of Killing, presents ‘The Malingers’ Craft: Mind Over Body in Twentieth Century Britain and America’ which takes as its launching point Edward Casey, a young Cockney soldier who, once caught up in WWI, feigned mental illness to avoid battle. The chapter goes on to consider the development of  psychology during wartime.

Geoffrey Best moves to a more autobiographical approach in his chapter ‘Education, Empire and Class: Growing Up in a New London Suburb in the 1930s’, reflecting on his own childhood in Osterley, a ‘middle-classes’ suburb.  This chapter ends where the next one begins, when Pat Jalland complicates the ‘stiff-upper-lip’ response to the Blitz in her chapter ‘The Peoples War: Death in the Blitz’.  By taking several biographical accounts of the grief and emotional shut-down that followed the sustained bombing, she compares this with the present-day emotional response to public tragedy.

The chapters then shift geographically from Britain to Australia – or, as is made clear in Phillipa Mein Smith’s chapter Australasia – incorporating New Zealand and Australia.  Her chapter ‘Retracing Australia: The History of a British Idea’ roves across public health, military and trade in looking sideways between Australia and New Zealand. It seems a particularly relevant chapter given New Zealand’s only-slightly-tongue-in-cheek campaign to ensure that they are not dropped off the map, starring Prime Minister Jacinda Adern.

I just loved Janet McCalman’s chapter ‘To Die without Friends: Solitaries, Drifters and Failures in a New World Society’ which examined demographic and epidemiological data that arose from the charity files of the Lying In Hospital in Melbourne, tracing the health and life outcomes of babies born in straitened circumstances from 1857-1900 up to the end of the open period for death certificates in 1985. As she points out, the information provided in Victoria’s very detailed death certificates required the presence of an informant who knew the names and birthplaces of family members in the past. For men and women estranged from their families, or at the end of a life of marginality and mobility, it is likely that this information remained unknown. She also, in half a page, proposes a pithy analysis of the trajectory of the ‘underclass’ cohort from the gold rushes through to the 1950s.

Then there’s Magarey’s excellent chapter on ‘The Private Life of  Catherine Helen Spence 1825-1910’ which had drawn me to the book in the first place, followed by the only chapter that actually speaks about F.B. Smith as a historian.  Written by military historian Peter Edwards, ‘A Tangle of Decency and Folly, Courage and Chicanery but above All, Waste’: The Case of Agent Orange and Australia’s Vietnam Veterans’ describes Smith’s own work as a historian in contributing a chapter to the official history of the Vietnam War. Smith reviewed the evidence arising from various commissions and enquiries into the effect of Agent Orange and, despite his own sympathies and convictions about war, concluded that Agent Orange was not the cause of veterans’ suffering – a conclusion, reached also by others, but completely imbued with politics.

And it was reading this last chapter that I remembered that I had read F. B. Smith after all. Last year I read his small booklet on the conscription debates in 1916 and 1917. It was barely more than a pamphlet, aimed at school students (in fact, I’m sure that I used it back in 1972 when I did HSC) but it combined policy, political and moral questions succinctly.  Ah- so it was that F. B. Smith!

Looking back at these various chapters, each self-contained and accessible, written by top-notch historians, they are all a reflection of Smith’s own work and influence. They also demonstrate the ripple effect of research: that others pick up one academic’s ideas and interests and make them their own, adding to and deepening the conversation and taking it forward.