A couple of days in the Wimmera Part II

Dusk was falling as we turned into our accommodation for the next two nights: a fantastic pastoral homestead at Wallup called Glenwillan. The date on the front of the homestead references 1888, the date that the three McRae brothers – Duncan, John and Farquahar- selected this property in the Mallee. It was cleared and sown with wheat and oats, as well as running sheep.  Glenwillan was constructed in 1912 using bricks from Stawell at the cost of £1500. It is now owned by the great-grandson of Farquahar McCrae. At first I was very excited, thinking that it was Georgiana McCrae‘s brother-in-law Farquahar, but it’s a different branch of the family.

We had the whole place to ourselves! What fun I had, checking out the photographs and paintings of McCraes long passed on the walls and admiring the original furniture- especially the huge dining table which was larger than original envisaged because the furniture maker could not bear to cut up such a beautiful length of wood.  The 1950s kitchen felt just like a Nana’s Kitchen.  At the back of the homestead were thatched stables, which were amazingly dry. 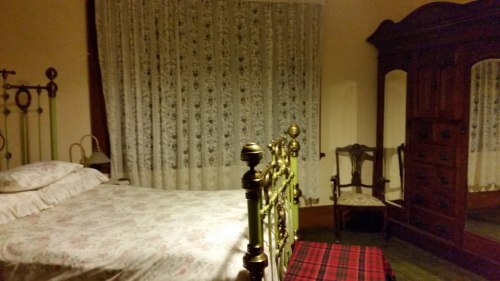 The hallway.  As a notable local, Farquahar McCrae and his wife attended the Proclamation of Federation at the Exhibition building in 1901, and there was a lot of memorabilia from that occasion. 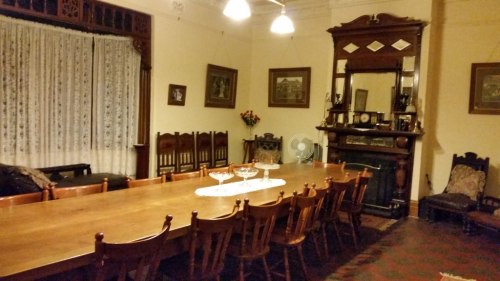 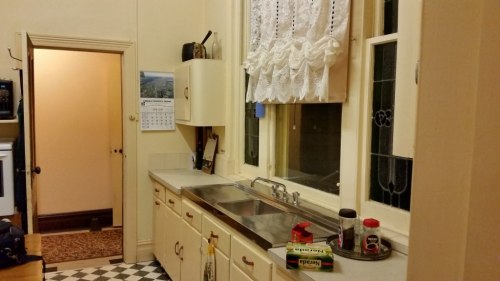 Next time I come up this way – and I will, just for Glenwillan itself – I’m going to make sure that the Murtoa Stick Shed is open. [Check out the link- it shows the inside] It’s open on the first Sunday of each month between 10.00 and 2.00.  It’s HUGE. It was built in 1941 to accommodate the wheat harvest during the war, and unlike other sheds of its type, it had a concrete floor.  It’s on the National Heritage Register. It’s so big that I couldn’t fit it into the one shot. 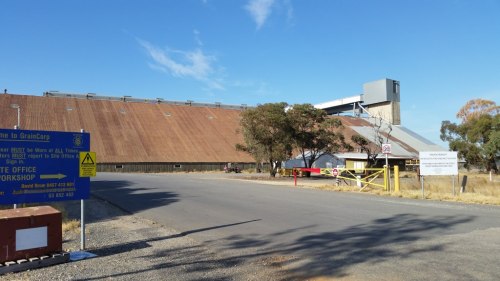 The whole impetus for this little trip to the Wimmera was to see the Silo Art Trail. This fantastic tourist initiative has funded artists to paint the disused wheat silos along the railway sidings in the Mallee area.  I notice that other towns (e.g. Benalla most recently) are also funding silo art. These ones in the Wimmera are a celebration of farming men and women, and to a lesser extent a nod to the continuing indigenous presence in the area.  The silos were built during the 1930s, and are between 28 and 50 kilometres apart. Some are on the outskirts of town; others are just on the siding with nothing else there. What a brilliant idea. 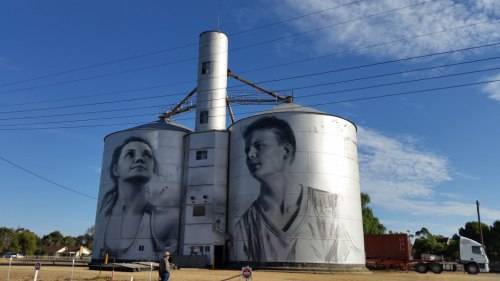 Brim, Artist: Guido van Helten.  The first of the silo murals, it was completed in 2016 and depicts an anonymous, multi-generational quartet of male and female farmers.  And yes, that’s me standing at the bottom, along with anonymous photo-bomber (who was very apologetic!)

Rosebery, Artist: Kaff-eine. Completed in late 2017, it captures a young female farmer and a contemporary horseman. 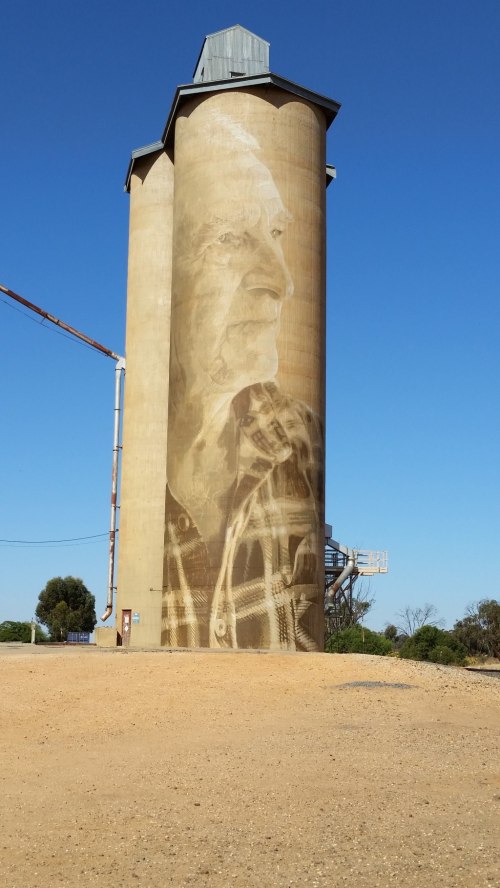 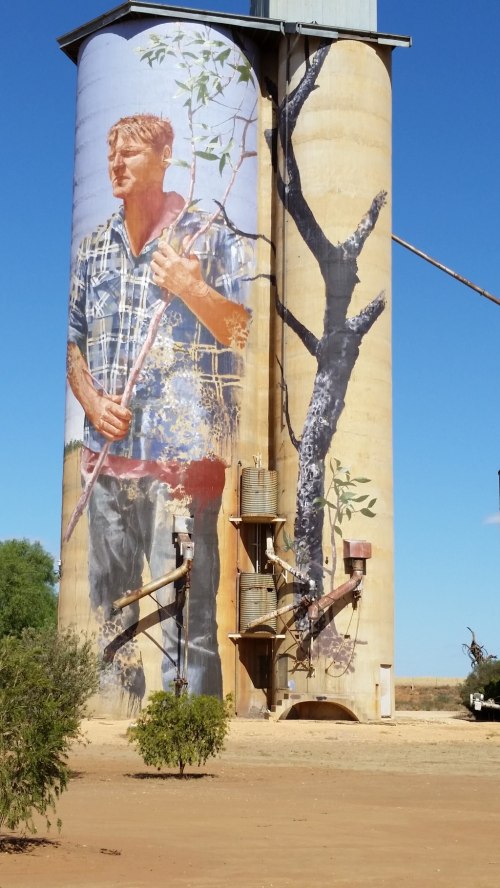 Patchewollock, Artist: Fintan Magee.  Completed in late 2016, this is a portrait of Nick ‘Noodle’ Hulland, a local farmer.  [Just as well that pipe isn’t located any higher!] An interesting ‘flaking’ effect in the painting – at least, I hope it IS an effect and not the real thing.

I mentioned in Part I that I felt that the Grampians/Gariwerd were resting on their touristic laurels a bit.  That certainly couldn’t be said of the Silo Art Trail.  I was really impressed with the little town of Minyip, where the local historical society had developed a trail of plaques up and down the largely deserted main street.  Minyip was used as the set for filming The Flying Doctors television series, and the only cafe in town was named ‘Emma’s place’ for one of the characters in the series.  I think that the whole idea is a wonderful tourist feature that entices city folk like us to an otherwise pretty remote area. 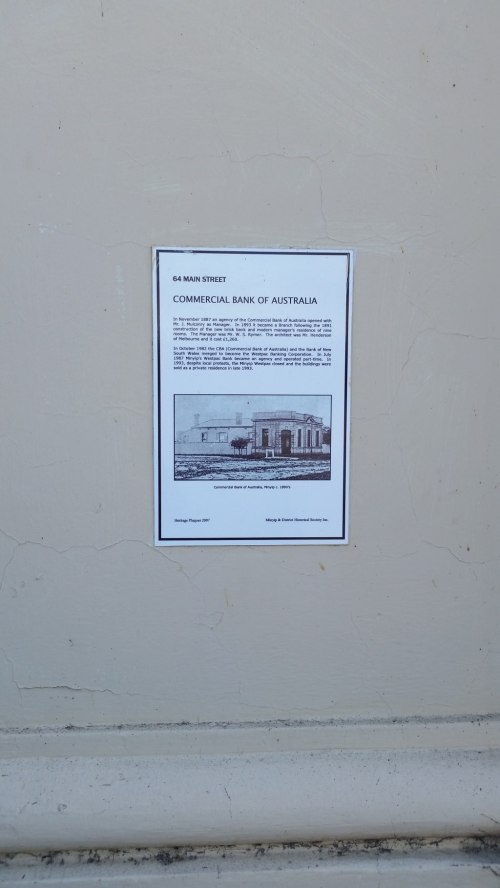 One of the plaques on, in this case, the disused Commercial Bank building.

We stopped off at Warracknabeal on the way home where, once again, we were lucky enough to find the historical society open.  This time, it was located in the old State Bank Branch.  When the bank closed, it was handed over to the Historical Society ‘as is’, complete with all the internal banking furniture.  It is a wonderful time capsule of a time when tellers wrote in your passbook, and there was a bank manager who actually knew you. Upstairs, in the bank manager’s quarters, there is a good display of a wide range of Warracknabeal artefacts, including the contents of the pharmacist’s shop. Really worth stopping off to visit, for the banking chamber alone.

We returned home to Glenwillan,  where we sat on the front porch with our books before returning to the very good Creekside pub at Warracknabeal some twenty kilometres away.  That night we turned off all the lights and stood in the back yard of the homestead, gaping at the stars in the vast sky.  Just think of it – they’re there every night but we just can’t see them in the city.

And so, eventually, we turned for home. We seemed to pack a lot into just three nights. It was great.