A couple of days in the Wimmera: Part I

In our retired state, we are no longer restricted to school holidays for trips away but we seem to have found new shackles: the U3A timetable! Steve conducts classes in beginner French at our local U3A so he prefers not to miss classes. Fortunately, our U3A terms do not start until the week after school returns, to give members who’ve been minding their grandchildren for a fortnight a bit of breathing space.  So, now that school is back, off to the Wimmera we headed for a couple of days. For those not familiar with the Wimmera, it’s located to the northwest of Melbourne, near the border of South Australia, and it’s a flat, arid dryland farming area.

We spent our first night at Horsham, the main population centre of the Wimmera, some 300 kms from Melbourne. We got there in time to visit the Regional Art Gallery, and a very fine gallery it is too. It was constructed in 1938-9 and is quite reminiscent of Heidelberg Town Hall.  A recent refurbishment really enhances its art deco features. 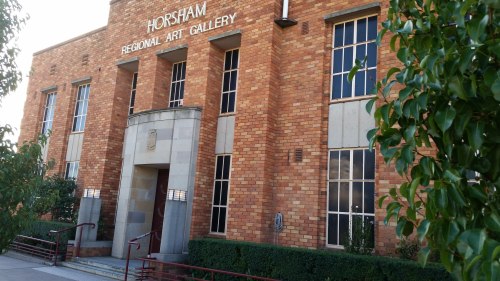 It has a terrific collection, largely based on the gift of its major benefactor, Mack Jost. There’s most of the Australian artists you know represented there, with a strong emphasis on modernist work,  but I hadn’t seen any of them before. Well worth a look.

I really don’t like motel rooms much, so when we saw that the Royal Hotel had accommodation, we thought that might be fun.  Once the cast iron balcony came down in the 1960s, it lost a lot of its charm. 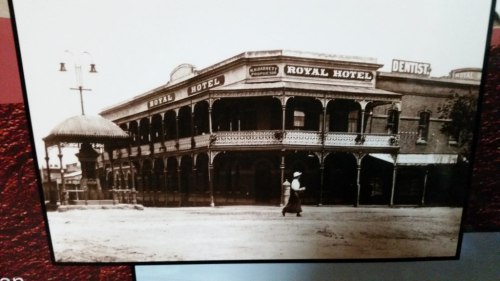 Hey- at only $60.00 a night, you can’t expect the Hilton.  The bed was comfortable, the hot water was hot and the Parma Night excellent. And it has a certain rustic charm.

The small but functional lounge 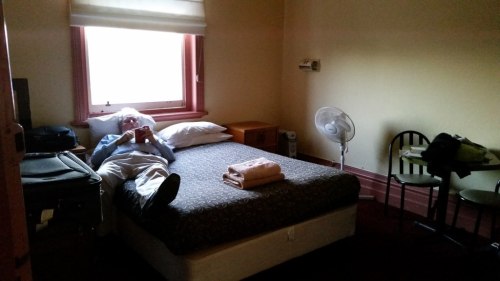 On Wednesday we backtracked a bit to the Grampians – or rather, Gariwerd- to see the aboriginal rockart in the National Park.  The area was hit by bushfires in 2014. It has grown back well, especially in comparison with Marysville which seems to have taken longer to revegetate, but I don’t know….I feel as if  Gariwerd /the Grampians have dropped the tourist ball a bit.  Their signage at the rock art sites was poor, with signs defaced or faded to the point of illegibility.   It’s an important part of Gariwerd – dammit, I’m going to use the indigenous name, even if they won’t – with its approximately 200 rock art sites comprising 80% of the Southern Victorian rock art. Five of them are open to the public, and we saw three of them.

First, Gulgurn Manja. It’s in a cave in a rocky outcrop, overlooking the valley. The handprints were made by children. 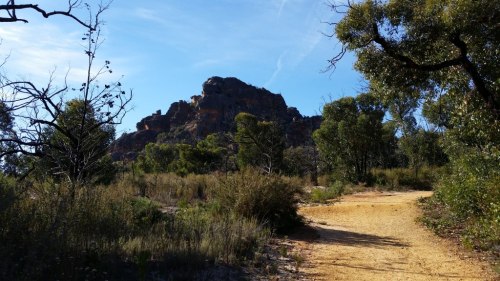 Then a bit further on to Ngamadjidj Shelter. Actually, a lot further because we got lost. Again, a bit of decent signage wouldn’t have gone astray.  This art has sixteen white figures, which is unusual because figures were usually painted in ochre. No one knows exactly what it means, because the traditional lifestyle of the  Jarwadjali people had been destroyed before it would be documented.

Finally, Bunjil’s Shelter, near Stawell. This site is very significant because it’s the only depiction of Bunjil, the creator of the land, the people, the plants, the animals and the law.   You can see the presence of burnt trees around the site. Shame about the cage protecting it, but it’s necessary unfortunately. 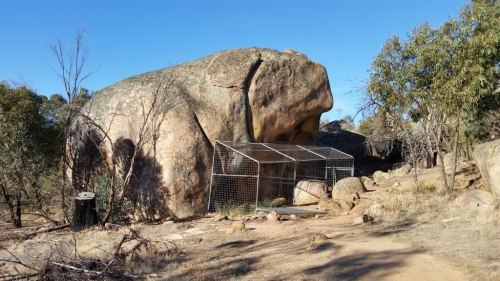 Actually, I hadn’t realized how well the sculptor Bruce Armstrong had referenced the stone above the Bunjil drawing when he created the Bunjil statue in central Melbourne that is rapidly disappearing amidst all the high-rises near Southern Cross (always Spencer Street) station. 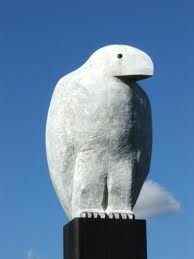 We called at Zumsteins Picnic Area.  It, too, was burnt out in 2014.  It was quite disorienting because it looked nothing like the way I remember it, with deciduous trees and kangaroos everywhere.  This article from 2013 shows how it was prior to the fire.  The signage was damaged here too,  with images torn from the information boards, exemplifying what I mean by ‘dropping the tourist ball’.  I wouldn’t have thought that it would take four years to replace. 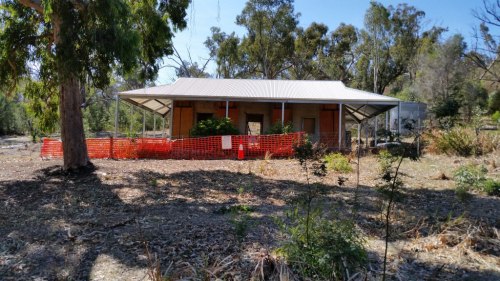 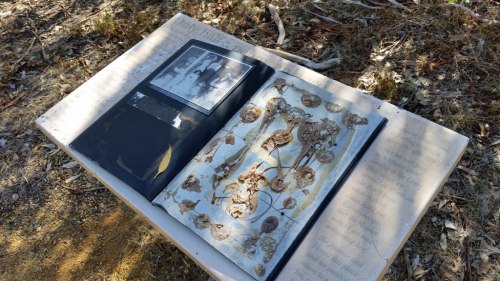 There was a similar sense of dislocation when we visited Brambuk Cultural Centre. When I was there years ago, the distinctive curved roofline of the Brambuk Centre stood out, but it is now surrounded by trees, and obscured completely by a rather ordinary National Park centre.  Unless you knew otherwise, you wouldn’t even be aware that Brambuk was behind the National Parks building. It seems that plenty of money has been lavished on the National Park building, but the displays at Brambuk itself could do with some care.  On the top level the information boards from the excellent Koorie display are arranged in a haphazard way, and they are looking rather tired and worn. Are local politics at play here? Methinks they are. 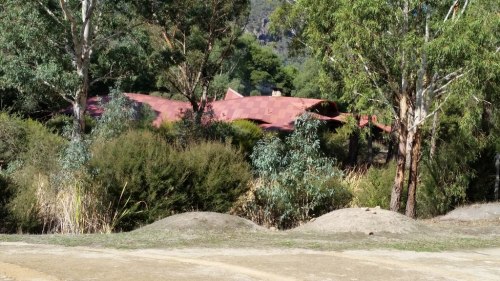 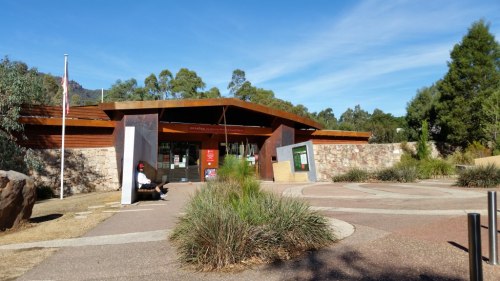 The afternoon drawing to a close, we just managed to catch the Stawell Historical Society while it was still open. It is located in the old Pleasant Creek courthouse, as is my own Heidelberg Historical Society, but through a combination of a generous bequest and council and government funding, the administrative offices and records of the Society are in a brilliant new office building adjoining the court house. They have extensive records of families and newspapers, and very impressive temperature controlled store rooms.  The courthouse holds various honour boards from local organizations, a good photograph display from the 1860s -so early!- and a modelled streetscape.

It was past the closing time for the Historical Society, and so we headed for our accommodation for the night. $60.00 a night at the pub in Horsham last night…what will tonight bring?

One response to “A couple of days in the Wimmera: Part I”