‘The Unusual Life of Edna Walling’ by Sara Hardy 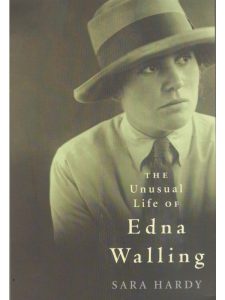 Have I ever seen an Edna Walling garden? I don’t know if I have, having never visited Cruden Farm.  I know what they look like, though: lots of stone walls, curved paths, and a mixture of deciduous and native plants. This book, however, is only tangentially about gardens.  Instead, it is about landscape architect Edna Walling herself, through the houses and places she made for herself.

The author, Sara Hardy, is a playwright whose work has focussed on strong, educated women and the complexities of their relationships.  Is there a pun perhaps, in the word ‘unusual’ which she uses to describe Walling’s life?  Because with her masculine dress, short hair and succession of close friendships with women, the supposition today would be that she was gay -or to pick up on the title, ‘queer’ – and certainly Hardy circles around this question.  She does not, however, definitively answer it because she cannot find the evidence to assert it with confidence.  For a book that flows so easily, Hardy is actually a disciplined biographer. There are no footnotes, but there are long endnotes that cite the sources for assertions including interviews, books, letters and Walling’s own writings. There are hints about her sexuality. The single surviving overwrought letter written by the 40 year old Walling to her close friend Esme.  The night in a single bed, when another friend, Olwyn arrived late at night.  An observation that ‘we’ enjoyed watching the birds in the garden outside from bed. But there’s no hard evidence.  Hardy notes that

Edna named her otherness as ‘misfit’ or ‘odd’ – her half joking way of saying she didn’t fit the standard female mould.  She may have recognized her otherness as an aspect of her sexuality, or she may not.  There are subtleties rather than clear-cut certainties.  Even Edna’s understanding of the term ‘sexuality’ would have been a world away from the informed and liberated use of the word today. (p.83)

…many women who would now be called lesbians didn’t recognize their intensity as sexual desire; they simply loved their very best friend- who loved them in return. They would have been horrified by the suggestion that their love was anything but pure, and if they did have an inkling, if they did share their bodies,as well as their hearts, why then – they kept quiet about it, and who could blame them? (p.83)

Walling told her niece Barbara in a letter

Often I wish I were in double harness & pulling with someone & then the inner voice says ‘you be grateful you’re not living with the wrong person – that’d drive you mad’  (p. 237).

She was friends with other women who lived openly in  a partnership, like bookshop owner Margareta Webber and Dr Jean Littlejohn, and landscape architect Mervyn Davis (she had a Welsh name) and Daphne Pearson. There seems to have been a succession of close female friends who threaded through her life, but they tended to marry and move on. Some acted as helpers in a domestic sense, others as professional colleagues who laboured with her in paid and unpaid jobs.  As she grew older, some were carers. When she designed the English-style communal village Bickleigh Vale, now in suburban Mooroolbark, it was known locally as ‘spinster’s row’.

Walling was born in England, and it was an idealized English landscape that influenced her early garden designs, with walls and deciduous trees and cottage plantings.  Over time, she became more enthusiastic about native plants, and was greatly exercised about the ugliness of road construction and the sterility of the roadside.  Interestingly enough, by the time she retired to Queensland, she had re-embraced exotic plantings again. So, too, her politics shifted, from conservative to left-wing.

She wrote gardening columns for many years, mainly in Home Beautiful, which greatly increased her profile.  She was obviously a forceful woman: some bridled against her control at Bickleigh Vale, and she had definite ideas about how her gardens should look. Her work brought her into contact with wealthy people (the Murdochs, Dame Nellie Melba) and her creativity brought her into intellectual circles as well.  She didn’t make her fortune from her gardens though: some wealthy clients refused to pay.  For a woman so attuned to place, she suffered three fires in her life: the first in England caused the family to emigrate; the second took her first home ‘Sonning’; and the third fire engulfed East Point at Eastern Beach near Lorne, just after she had given it to the Bird Observer’s Club.  Her first houses, at Bickleigh Vale, were a consciously constructed  landscaped scene, highly reminiscent of England, where she imposed a covenant over the design of houses and their gardens. By the time she built East Point, she built the house to respond to the landscape, re-aligning walls and incorporating rocky outcrops into the design of the house itself: a shift to the natural not unlike her shift from exotic to native plants.

Walling’s own columns were written in a jaunty, jolly-hockey-sticks sort of way, and Hardy’s text seems to have picked up a similar tone.  While she does not go beyond the evidence available to her, she does break into present-tense imaginings that embroider and bring to life some of the events she describes.  These imaginings are well sign-posted as conjecture, and as a reader I’m inclined to trust her renderings, given the rigour with which she supports her work otherwise.

An unusual life? For its time, certainly. A queer life? Most probably, but along with Hardy, I suspend judgment over that.  She may have died as an elderly woman living on the Queensland coast, but her life was richer than such a mundane death suggests.  New owners have taken over many of her gardens, imposing their own visions onto them, but they remain at heart Edna Walling gardens.

Read because: It was a CAE bookgroup choice