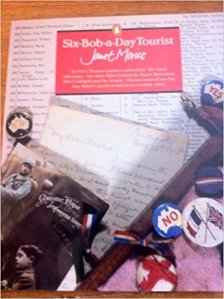 It didn’t take long for Thomas Gardner of  117 George Street East Melbourne to enlist in what was to become  the Great War. Due to the time difference, news of Britain’s declaration of war reached Australia on the same day that it was made (5 August 1914). Just three weeks later, Thomas Gardner, aged 33, had joined the AIF, E Company, 7th battalion as one of the ‘Six Bob-a-Day Tourists’, the deprecating term given to the highly paid Australian soldier, whose generous pay outstripped that of many working men at home and the soldiers of allied countries.  Without wanting to diminish it in any way,  Tom’s story ticks all the WWI narrative features that have come to be associated with ‘our ANZACs’ : sent out to the Training Camp in Broadmeadows; the sea voyage; waiting around in Egypt; Gallipoli; Lone Pine; France; hospital in England; back to France; sent home; discharged on grounds of ill-health; dead.  You can read about Thomas Gardner’s war and see pictures of him at the National Anzac Centre website.

I was attracted to reading this book not so much for Tom’s story on the front, but for the interactions with his family back home.  Tom had been rather peripatetic in the years leading up to the war, travelling from town to town as a wood-turner, but he returned often to 117 George Street to visit his mother, sisters Mabel, Adeline and Edith, and niece Cecily and nephew Guy.  His widowed sister Mabel re-married in June 1914, just before war was declared.  She had matriculated from PLC, and after returning to Melbourne following her first husband’s death after just four years of marriage, worked as a secretary, learned Esperanto, and was involved in debating and literary societies.

Two months after their wedding, war was declared, and at home the verbal battles raged. Tom was a volunteer and his mother and two of his sisters took the patriotic stance. Mabel and [husband] Will, however, took the opposite view. Will did not volunteer partly because he had just married, but mainly because he and Mabel were both pacifists (p.45)

Mabel and Will were drawn to the lectures and anti-war stance of Dr Charles Strong of the Australian Church.  Mabel, and her childhood friend Eleanor Moore, were present at the inaugural meeting of the Sisterhood for International Peace at the Russell Street Australian Church, and became the correspondence secretaries for the Sisterhood. She also joined the Free Religious Fellowship, an organization with a literary base that included Vance and Nettie Palmer, Louis Essen, Frank Wilmot (Furnley Maurice) and Alan Villiers.  It was headed by Mr Frederick Sinclaire, the former minister of the Unitarian church in East Melbourne.  She used her elocution skills by lecturing on pacifism for the Peace Movement, and hosted sewing groups and letter-writing and pamphlet-printing sessions at her home in East Melbourne. During the conscription debates she attended meetings and marches for anti-conscription.

Her mother and sisters, as strong patriots, disapproved of her political activism but how did her brother Tom – serving in the same way that she was protesting-  feel about this anti-war political involvement? In a letter from November 1916, after the conscription proposal had been defeated, he wrote that he was sorry that politics had led to tension between Mabel and her sister Adeline:

I was very glad to see Hughes’s proposal ousted….If conscription had been carried, goodness knows where it would have stopped.  And you can tell Addie this- that were I a married man in Australia (I am not speaking of Belgium or France) and had children who were depended on me, I would not deem it my duty to enlist until every eligible single male had gone… Re your conscription remarks.  You are very violent, my dear, peace-loving sister.  Well, let me lower “me breff” while I tell you that a fellow named Tom who lived at 117 George Street, East Melbourne, also voted ‘No’. And he knew a lot of other fellows, who knew a couple of thousand other fellows who voted ‘No.’ So I’m blest if I know.  (p. 55)

This book features only Tom’s letters, not those sent by his family.  The book is organized chronologically, with the focus on Tom’s war, intersected by Mabel’s peace activities back home. Through Tom’s letters, we see him becoming increasingly disillusioned by the war, until by June 1918, at the age of 38 he described himself as “so nervy I can’t bother about anything.”  You just know that this is not going to end well.

At only 85 pages, this is not a long book, and it rattles along at a pace.  It combines imagined scenes with excerpts from Tom’s letters, illustrations, and contextual information.  The author,  the grand-daughter of Mabel, has rather delicately omitted the details of Tom’s encounter with venereal disease which is mentioned on the National Anzac page, and as a reader you can sense her sympathy for both Tom and Mabel.

The book is not easily available today, and you’ll need to turn to secondhand sellers if you want to find it.  It puts a very human face on WWI, and it complicates the image we have of the family left ‘at home’.  Family members could love and grieve for their ‘boy’ overseas, and they could campaign for peace back home as well. Some family members expressed their love through patriotism; others through fighting to put an end to war.

This is my first review for 2018 for the Australian Women Writers Challenge.