‘A Book of American Martyrs: a novel’ by Joyce Carol Oates 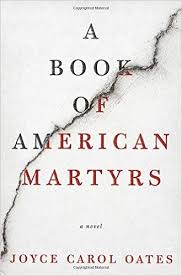 It’s been a while since I last read a book by Joyce Carol Oates. What a prolific author she is! Her bibliography lists 41 titles, with one book published each year since 1994. Some of them are gritty, edgy (often icky) novella-length books (e.g. The Beasts at 130 pages) while others, like  My Heart Laid Bare (531 p.) are real door-stoppers. There are themes she revisits in many of her books – emotionally lost female protagonists, infatuation, and the rippling effects of a crime on a family – and they’re all here in A Book of American Martyrs.

Here, though, they’re placed within the cultural and religious chasm between pro-life and pro-choice activists that has ruptured American politics for years.  Luther Dunphy is a zealous evangelical Christian, convinced that God has chosen him to assassinate an abortion provider, Gus Voorhees, in the driveway of the clinic where he is employed. Both men pay with their lives, in different ways.

Rather unusually for a fiction book, it has a table of contents. The book is divided into five sections, each divided from the next by a grubby, much-handled page that suggests that the book is a series of smaller, covered books, each separate from the other.  The first section focusses on Luther Amos Dunphy ‘Soldier of God’ and leads us up to the shooting. It is followed by a section ‘The Life and Death of Gus Voorhees’, subtitled ‘An Archive’. This archive, collected by Voorhees’ daughter Naomi, is her way of trying to make sense of her father’s death. It comprises a disparate and unsorted collection of documents, interviews and narratives from different members of Gus Voorhees’ family, some no longer than a paragraph, others some thirty pages in length.  The reader is left to make her own sense of all this.

The remaining three sections are arranged chronologically. ‘The Hammer’ turns to Edna Mae and Dawn, Luther Dunphy’s wife and daughter, in the years leading up to Dunphy’s execution in 2006. (I read this book in May 2017, very much aware of the multiple executions being lined up in Arkansas, where the drugs used to kill the prisoners are due to expire. It all seemed very pertinent) Now there are two martyrs: Dr.Gus Voorhees who died for the pro-choice principle, and Luther Dunphy who revels in his role as the man God chose to save the babies that Voorhees was about to ‘murder’ that day.

In the fourth section ‘The Embrace’ (2006-2010) and the final section ‘The Consolation of Grief’ (2011-2012) the two daughters, Naomi Voorhees and Dawn Dunphy come into each other’s orbit.  Both are damaged by their fathers’ deaths, each in their own way. Dawn, poorly educated and marginally employed, is achieving minor success as the female boxer, D. D. Dunphy. Naomi, who has spent most of her adolescence and adult life so far in obsessively collecting the ‘archive’ in Part Two is freed by wealth and connections from any real necessity to make a living. For both women, though, their families have fractured.  The two girls are united by their fathers’ martyrdom, but politically and culturally they are far separated.

This is a very long book at over 700 pages, but I didn’t find myself wishing that it were shorter, and I even felt sorry when it came to an end.  The Dunphy characters – Luther and Dawn- are more fully drawn than the Voorhees family, who always seemed rather insipid. I don’t know enough about small-town Evangelical working-class Americans to know whether Oates is being clear-eyed or loading on the stereotypes- I suspect a bit of both.  There is a lot of detail about boxing which probably could have been trimmed, although given that Oates wrote a series on essays On Boxing, it’s probably no surprise that so much attention is paid to the sport.

Oates herself does not come down on one side or the other of the abortion question. She gives each of the ‘martyrs’ a worldview that makes sense of their actions, however they might appear from the outside.