Step up! Step up!

At this time, what we now know as the Old Melbourne Gaol was under construction, replacing a succession of smaller, temporary jails. The first gaol  was a converted shepherd’s hut on Batman Hill set off Collins Street between King and Spencer Street. It was burnt down in an escape by two Kulin men being held for trial in April 1838.  The gaol shifted briefly to a brick store on the corner of William and Flinders Streets until another gaol was built adjoining the police office and the stocks on William Street between Collins and Flinders Lane. The fourth and last of the temporary gaols was opened in 1840, located   close to where the the very first gaol had been sited, back near the corner of Collins and Spencer Street.  It would serve until 1844 when the present Old Melbourne Gaol was opened, although the three-storey building still standing in Russell Street today was not opened until  1853.

Prisoners sentenced to hard labour often worked on the roads, where they were often the butt of criticism and derision from passerby who accused them of loafing. During this week news came of plans for a treadmill to be erected outside the ‘new gaol’ as an additional punishment that could be ordered by the court, meaning by ‘new gaol’ the fourth, temporary gaol.  A treadmill was listed as one of the assets in the Port Phillip District as on 12 September 1841 so I’m not sure if there was an earlier one.  Nonetheless, the papers reported in early November that:

Among the various works for the accommodation and improvement of her Majesty’s lieges, now in progress, we ought not to omit to mention the treadmill which is to be erected in a building recently commenced in the rear of the jail. We are delighted with the prospect of the speedy introduction of this agreeable species of moral and corporeal exercise (PPP 15/11/41)

The tender for the treadmill was accepted in early November for a cost of £180.  However, the treadmill was to cause nothing but trouble, often being inoperable. Within a year it was found that the heat caused by friction on the ironwork caused the woodwork to warp and become loose.  There were multiple attempts to repair it, and there were hopes that by attaching it to a maize mill, it would prevent the problem from recurring and be more useful.  In 1844 the treadmill was shifted to the ‘new’ Old Melbourne Gaol where both it, and the supervisors appointed to oversee it continued to cause trouble- in the latter case through drunkenness or failure to stop escape attempts.

There are few mentions of the treadmill in the Criminal Record Books for the Supreme Court, although it may have been used more for internal discipline purposes within the gaol itself.  It was obviously operational by 15 March 1842 when Judge Willis ordered two prisoners to work on it: the first for a rape conviction, where the prisoner was ordered to spend time on the treadmill at fortnightly intervals for three months; the second for turkey stealing where the prisoner was sentenced to three months jail, with alternative weeks on the treadmill in the last two months.  A third sentence on 7 April over theft of alcohol was for one month jail with the second and last week spent on the treadmill. There were no other sentences involving the treadmill recorded- perhaps it had become too problematic!

Dr Lang and the Australian College

During this week in 1841, the Presbyterians of Melbourne briefly welcomed Dr John Dunmore Lang from Sydney. What a fascinating man Lang was! and he keeps popping up in different contexts. Born in Scotland, he arrived in  New South Wales in May 1823 where he was the first mainland Presbyterian minister in the colony (there was another in Tasmania). A disputatious, forthright fellow, he brawled with fellow Presbyterians who he felt to have fallen into error, and was publicly critical of the influx of Catholics from Ireland. He was involved in education and politics, he was an immigration organizer, a writer and  newspaper editor. His mobility back and forth between Australia and England is remarkable, making at least eight visits to and from England and two to the United States over his long life.  He arrived in Port Phillip on 15 November for a fleeting visit to solicit financial assistance from Port Phillip for the Australian College, which he had established in Sydney in 1831.  On one of his trips to England he had received a grant of £3500 from the Colonial Office for the establishment of a private college if the same sum could be raised privately (an early private-public partnership!)  He put much of his own money from a bequest from his father into the institution, but it was still struggling financially in 1841: so much so- spoiler alert- that it closed between 1841 and 1846 before opening again to struggle on for another eight years.  He bemoaned the fact that he had not been given an endowment for the college from the local government in Sydney, which  he attributed to narrow minded jealousy, personal hostility to himself and the fact that the majority of members of the Legislative Assembly did not themselves enjoy a college education.

And so here he was in Melbourne, suggesting that the Presbyterian residents of Melbourne form “The Port Phillip Education Society” to contribute £200 annually for four years to endow a professor at the college. What was in it for the Port Phillip Presbyterians, you might wonder?  Well, the Australian College could educate local lads for the ministry, thus providing a home-grown cadre of Presbyterian ministers. He proceeded to Launceston and Hobart to make a similar suggestion to the Van Diemen’s Land Presbyterians. (PPP 15/10)  before returning  to discuss the matter more fully at a meeting called for the 3rd of December for interested participants. 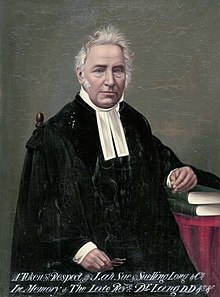 Well, summer had arrived, with a top temperature of 90F (32C) on the 15th and 16th November, followed by a cool change.  There was no rain during the week at all.