‘What Do We Want?’ by Clive Hamilton 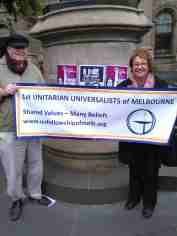 It’s often struck me as I gaze around at the people, many of whom are my baby-boomer age and at the police who generally just look bored, that demonstrating in Melbourne CBD in the 2000s is a fairly cost-free enterprise for me. I’m reassured that I won’t be arrested (a middle-aged woman isn’t much of a threat) and I’m certain that I won’t be killed. I am very much aware that there are other places in the world where this isn’t the case, and I suspect that although I’m happy to let the whole world see my principles and causes here in safe Melbourne, I’d suppress or maybe even jettison them in a more dangerous environment.  But as Clive Hamilton shows us in this book, protest in Australia has not always been as cost-free as it is now.

As he explains in his introduction, Clive Hamilton himself has been a “foot soldier in several of the protest movements here described” and, for him, the writing of this book has been “not only a fascinating authorial task but also a wistful return to an early phase of my life” (p.viii). I think that this would be true of many of the baby-boomer, left-leaning, university-educated audience at whom that this book is probably aimed.  Possessed of the sense of democratic entitlement to protest, and living within a time of social change:

For many of the young people caught up in those heady times, the protests defined us. We felt we were making the world a better place, and we were. Although a few moved into politics and non-government organisations, most went on to careers, families and mortgages. But so deep was the imprint of those times that we always live a little in their shadow. (p. viii)

While that’s true, one of the things that surprised (and pleased) me was how many of the names mentioned in this book in passing are familiar to us, some thirty or forty years later in a range of  political, legal and policy bodies and in the entertainment industry. Hamilton says that the major aim of this book is to “honour those who have had the courage and commitment to stand at the front of the barricades” and as he points out, the presence of one or two main characters is fundamental to the theatre of protest.  His observations about the Tent Embassy hold true for protests in general:

Like all of the most effective protests, the Tent Embassy was a piece of theatre- the scene was set over an extended period, various characters were developed, tension mounted, a climax was reached and a denouement followed (p 118)

The choice of protest movements that he focuses on were influenced, he admits, by space limitations and the availability of usable images.  Pictures do play an important part in this book, described in Lisa’s review at ANZLitLovers LitBlog as “a sort of coffee table book for baby boomers”. As a result, he generally takes up the stories of protests from about the 1960s onwards – something that was most discordant to me in his opening chapter “End the War” which commenced with the Vietnam war with little acknowledgment of the anti-war activism that had accompanied the First and Second World Wars.  His emphasis on protests from the mid-20th century onwards also means that he has been able to supplement his analysis with oral history.

His opening chapter ‘End the War’ focuses on the anti-conscription protests on the 1960s and early 1970s, most particularly (I’m proud to say) in Melbourne, where protests tend to be larger than elsewhere in Australia, including the anti-Iraq War protests with which the chapter ends.  The second chapter ‘Women’s Emancipation’ gives a longer-term description of feminism in Australia using the ‘first/second/third wave’ analysis and ending with the large march in Brunswick following the murder of Jill Meagher.  Hamilton has made better use of older images here, with a good coverage of images of Vida Goldstein and Adela Pankhurst, for example, in the early years of the twentieth century. I was struck by the salience of the ‘chain’ imagery in some of his images, most particularly Rosalie Bogner and Merle Thornton (yes, Sigrid’s mum) chaining themselves to the bar at the Regatta Hotel, and Zelda D’Aprano shackling herself to the Commonwealth Building in Spring Street Melbourne over equal pay.

In my opening paragraph to this review, I commented that I felt safe in attending the protests I do, but this was certainly not the case in the third chapter ‘Gay Liberation’ where police violence was ugly and highly personalized.  There are murders here, and bashings that even prompted an apology from the NSW Parliament and Police for the violence at the first Mardi Gras in 1978.  In Chapter 4 ‘Indigenous Rights’ Hamilton reaches back into the first decades of white invasion to juxtapose the responses of Pemulwuy, who violently resisted invasion, and Bennelong who accommodated and adapted in the attempt to gain acceptance. This dichotomy between confrontation and conciliation, Hamilton argues,  is part of a every social movement but is particularly evident in Aboriginal politics, throughout Australia’s history. For a race that was supposed to die out or become invisible, the very act of making oneself visible was in itself a protest, as shown in the picture of Jimmy Clements sitting on the bare grass at the front of a newly-opened Parliament House in Canberra in 1927, a site re-occupied with the Tent Embassy of 1972. The Freedom Ride of 1965, taken up largely by young white activists, made indigenous people and the racism in outback NSW towns visible to city-dwellers, and was the training ground for activists who were to take up eminent roles in later life, particularly in the law (e.g. NSW Chief Justice Jim Spigelman, and A.C.T. Supreme Court judge Richard Refshuage).

Chapter 5 ‘Justice for All’ is rather a grab-bag of protest events “too significant or too fascinating to leave out” (p. 129). It includes the use of humour and satire, as in the BUGA-UP campaign against cigarette billboards, or Pauline Pantsdown’s parody of Pauline Hanson. It describes the Political Economy dispute (good RN podcast here)  at Sydney University in 1975 where current politicians Malcolm Turnbull, Tony Abbott and Anthony Albanese were involved as undergraduates, and the low key and generous actions of Rural Australians for Refugees. The chapter closes with the bizarre scene of Gina Rinehart protesting the mining tax  with the bemused question “How could the act of protesting, the last resort of the powerless, be subverted by the richest and most powerful people in the land?” (p.154)

The final chapter of the book is ‘Save the Environment’ which starts with the 1969 protests over the Little Desert, which he sees as a transition from nature conservation to modern environmentalism. He focuses on protests over forestry, supplementing the text with the beautiful images of the Franklin River, and closes with protests over coal seam gas. Here we shift from a social movement involving personal freedoms to an economic critique, and here coercion and punishment takes on a monetary rather than physical form:

It turned out that the market could effortlessly accommodate demands for liberation, as long as they were demands for personal freedoms rather than threats to the economic structure itself. (p 190)

In this regard, the federal government’s attempts to remove access to the High Court over environmental matters, the creation of a new offence for aggravated unlawful entry on ‘inclosed’ land and the increase in fines for trespass from $500 to $5500 suggest that when the economic structure is threatened, the reaction is financial and legal rather than merely physical.

This book is very much of the Left, and I found myself wondering if and how the Right protests.  Although the Cronulla riots do get some coverage, there is no mention of the anti-abortion Helpers of God’s Precious Infants who have protested outside clinics for decades. Even on the Left, it seemed that there were some curious omissions.  I was surprised, for example, that anti-nuclear campaigns did not get more coverage: I feel as if I’ve seen that person on stilts with a gas mask for years.

The protests in this book involved people, and flipping through the abundant photographs, there is a focus on physical flesh-and-bones bodies.  This is not ‘clicktivism’ but on the street activism: “Rather than waiting for society to be ready for change, the lesson of radical activism is to make society ready for change” (p.116) With the electoral results with Brexit and now the American election, it seems that society can change in unpredictable ways and that ‘protest’ is now being played out through the system, and not just against it- but who knows how that is going to play out. Interesting times indeed.

This entry was posted in Book reviews, Uncategorized. Bookmark the permalink.