‘The Tsar of Love and Techno’ by Anthony Marra 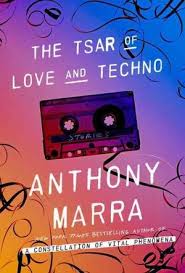 2015, 318.  (How odd- there’s hundreds of images of this front cover online, but none of the front cover that sits on the desk behind me, which shos a leopard and a cossack. I think mine’s the UK version)

I just loved this book.  It is marketed as ‘Stories’, but they are all interconnected through recurring characters and objects. This interconnection is more integrated than, say, Olive Kitteridge, where Olive has a walk-in, walk-off role in some of the stories.  Instead, this is more like a jigsaw when you realize with a satisfying ‘click’ that you’ve placed another piece in the puzzle; or like a family history search when all of a sudden a connection comes clear.

Each story is self-contained and yet cumulative.  The settings span Leningrad in 1937 , a labour camp in Kirovsk at the same time and Kirovsk sixty years later, Grozny in in 2003, in the midst of the Chechen Wars and St Petersburg in 2001, 2011 and 2013.  Of these settings, two in particular are memorable. The first is the heavily polluted northern industrial city of Kirovsk where every second person dies of lung cancer, the lake is full of mercury, the twelve smokestacks that belch out filth are dubbed ‘The Twelve Apostles’ and an artificial forest of metal trees has been created because nothing will grow there.  The second is in the Chechen Highlands, most particularly whitewashed cottage nestled against a hillside with a vegetable patch beyond.  This cottage has been captured in a painting, which is changed by later artists and curators, just as the picture of a ballerina’s hand is the only thing left after a Party censor has been charged with expunging the now-disfavoured ballerina. But people and things are not just removed from paintings, but can be inserted into them as well.  Anguished by guilt at his brother’s arrest, the Party censor inserts his brother’s face into paintings as well, as a haunting act of insubordination.

We meet the Party Censor, Roman Osipovich Martin, in 1937 and we will find him sixty years later as the subject of a retrospective exhibition.  Galina the ballerina marries the 13th richest man in the former Soviet Union before she is disgraced. Lydia marries a piano-tuner as a mail-order bride before returning to Kirovsk to live with her impoverished mother. Kolya is captured and held hostage near the whitewashed cottage beside the hill: his brother is the creator of the mix-tape.

The book is structured in three parts: Side 1, Intermission, and Side 2- an allusion to the cassette tape containing a mix-tape of techno music made by a younger brother for his older brother bound for Checyna in the Russian army. The Intermission section is the longest, and it is this story that helps put the chronology into some order.   I enjoyed each story, and soon learned not to be disappointed at the end of one story, because the next one would be just as good too.  With the exception, perhaps, of the last story which just seemed silly, although in a book using this narrative structure, there has to be some way of definitively finishing it, I suppose.

And so, a great whacking five out of five for me.  I only wish that I could have the pleasure of reading it again for the first time!