Oh dear, I’ve fallen so far behind with all of these. House renovations and conferences seemed to get in the way and I’m quite embarrassed by my tardiness. Apologies.

And we’ve all been waiting so long for the Dignity Ball- and here it is! As you might remember, the Patriot and Gazette railed against the elitism displayed by the ‘gentlemen’ of Port Phillip wanting to distance themselves from the ‘common’ (sniff) Queens Birthday Ball.  But apparently the stewards had a change of heart, and decided to include some people who had been previously excluded.

The Ball is in preparation to come off on the 8th instant. The Stewards may be congratulated upon the wisdom they have shewn in acting after the suggestions of the press, by modifying their senseless exclusionism, and extended the issue of their tickets. This policy, which we learn from the Stewards has been thus tardily adopted , will certainly bring the fete off with greater credit to themselves and the character of the population.  (Port Phillip Gazette 5 June 1841)

Notwithstanding this change of policy, the Port Phillip Patriot predicted a poor turnout:

The famous ‘Dignity Ball’ postponed in the first instance till the races, then till Her Majesty’s Birth day, then till the 4th June and then till the 8th instant, will eventually, it is expected, come off tomorrow night, but the attendance it is expected will be as poor as unpopularity can make it.  A bold manoeuvre was made by the Stewards at the eleventh hour to retrieve their original blunder by issuing invitations to the parties previously passed over as unfit for admission, but it has very properly failed.  Our contemporary, the Gazette has, we regret to observe, taken this manifestation of a defeat as an evidence that the stewards have had the good sense to modify their “senseless exclusionism” but we know them better.  Nevertheless we are sorry that it is so, for it is not in our nature to war either against the men or the amusement, though we have warred, and will war to the death against them, or any other set of men who, like them, attempt to set themselves up to decide automatically as to the eligibility or non-eligibility of their fellow-colonists for admission to society(PPP,June 7) p. 2

And sure enough, its report of the ball portrayed it as a drab affair:

The far famed  and long expected “Dignity Ball” came off on Tuesday night, and a very dull affair it proved.  The attendance was but thin and few of the ladies of Melbourne honoured the assemblage with their presence in consequence of certain doubts which had got about touching the reputation of one or two fair dames expected to be present.  The only really good part of the evening’s entertainments was the supper, which , as we are told, did great credit to Mr Meek’s knowledge of the science of gastronomy. (PPP June 10)

And so we need to turn to the Port Phillip Herald, regarded as the newspaper of choice for ‘better’ society to give us a more positive report

THE BALL- This private entertainment took place at Mr Davies’ long room, on Tuesday evening, and went off with much spirit.  There were forty-four ladies and sixty-seven gentlemen present, His Honor, Mr La Trobe and Lady, amongst the number, who seemed highly delighted with the evening’s festivities.  The Stewards had provided a most magnificent supper, which was done ample justice by the guess. The party did not finally separate till five o’clock. (Port Phillip Herald 11 June 1841)

It is the presence of Superintendent La Trobe and his wife Sofie, that marks this Ball out as ‘respectable’, in a way that the earlier Queen’s Birthday Ball was not.  And the stamina- kicking up their heels until 5.00 a.m. (and we thought all-night dance parties were a new phenomenon!)  And was Judge Willis there? No!   Fourteen years ago in Upper Canada he had been a bit of a socialite with his first wife, but there’s little evidence of party-going antics in British Guiana or New South Wales.  Perhaps he’d learned his lesson in Upper Canada; or maybe his second wife (who was expecting a baby in September) was reluctant to go. One way or another, he wasn’t there.

Things were really starting to move in Port Phillip. Early buildings of canvas and wood were giving way to more substantial constructions as a very physical demonstration of progress in the District.

PUBLIC BUILDINGS: We feel a pleasure in recording the fact, that the public buildings in Melbourne, in the progress of erection, are going ahead in a steady and praiseworthy manner, when the limited mechanical force employed is taken into consideration. The Custom House “where merchants most do congregate”, a building in all extensive mercantile communities of the utmost importance, is now ready for slating, that description of covering being preferred to shingles.  The Bonded Store beneath may be found too small for its legitimate purpose, if so the plan of licensing stores, belonging to private individuals in the town, may be continued as an present.  The Post Office, at the junction of Bourke and Elizabeth-streets, is progressing rapidly, and in a couple of months, if nothing intervenes, may be in possession of the proper officers, “a consummation devoutly to be wished.” The New Watch-house, on the Eastern Hill, has been completed, and taken possession of within the last few days.  It is a stone building, conveniently designed, and well executed, and will be appropriated to the reception of the idle and disorderly in the vicinity of New Town, instead of their being dragged upwards of a mile to the Melbourne receiving house, as heretofore.  The foundation of the Jail has been excavated, and one wing of the building already commenced, which will be completed before any further portion of the building is proceeded with. This wing will be appropriated solely to the reception of convicts, or parties committed for trial.  The plan of the building is that of the wings of the new Sydney Jail, and will contain forty-two cells upon the ground floor, and in the upper stories it is to be three in height, rooms 12 by 6, for the purpose of classification.  The second wing is for a House of Correction, and Debtor’s Prison. When completed, the whole building will consist of two wings, facing Swanston Street, in a line with the Caledonian Hotel, having the Jailer’s house etc. in the centre.

The Customs House mentioned here is not the one that stands in Flinders Street today. The picture below, by Robert Russell in 1844, shows the brownstone Customs House described here. It is, nonetheless, one of the most impressive buildings in Melbourne.  It was replaced by a second Customs House from 1858 onwards. 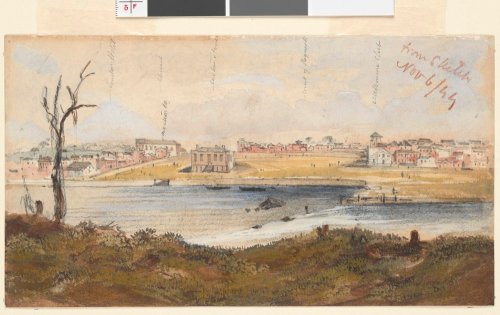 The jail mentioned here is the Old Melbourne Jail, but it is not the bluestone cellblock that still stands today, which was commenced in 1853. Earlier buildings were demolished in the 1930s, so presumably the buildings described here would have been removed at that time.  The Eastern Hill watch-house described here, according to Robyn Annear’s Bearbrass was on the corner of what we know as Exhibition and Little Collins Street.  Its proximity to ‘Newtown’ (i.e. Fitzroy) would be along Exhibition Street.

Actually, this occurred on 6th June, but wasn’t reported for a few days.

EARTHQUAKE: An Sunday last, during the hours of divine service, a rumbling noise was heard in the earth, supposed to be the fore-runner of an earthquake. In the Church it was distinctly heard, and the congregation alarmed; also, in several parts of the town, giving rise to various speculations. (PPH June 11)

It often strikes me that, for these early settlers, everything was still new.  Were earthquakes common?  They didn’t know.