NO A BETTER TIME TO BE….A PARTY ANIMAL

It seems that May was Party Time in Melbourne, with intimations of balls to be held later in the month, and news of the Tradesmen’s Union Benefit Society annual knees-up at the Builders Arms Hotel in Little Collins Street.  This Society, comprised of “independent, honest tradesmen and mechanics to whose exertion and expertise this town chiefly owes it original structure and present stability” was formed in May 1839 under the patronage of Captain Lonsdale, with Dr Cussen as the Medical Officer (PPG 29/5/39). Its regulations, which closely followed those of a similar Sydney-based organization, emphasized that it was “based on humanity and charity…and characterized by real utility, and defended by morality and religion”. On payment of a weekly subscription, members were eligible for sickness benefits and surgical and medical aid, based on the length of membership and the availability of Society funds.  Soon after its formation it boasted 100 members. [See: Sullivan Men and Women of Port Phillip p. 236-8]

So what happens at a Tradesmen’s Union Benefit Society Dinner?

Yesterday the annual dinner of this Society was held at the ‘Builders Arms’ Little Collins-street, when about thirty of its members sat down to a most respectable feed, both before and after which, they walked in procession accompanied by a band. (PPH 11/5/41)

A GOOD TIME TO BE… AN ATTORNEY

As long as you were a respectable attorney, that is. On the last day of Easter Term Judge Willis  heard applications for the admission of attorneys (or what we would call solicitors today) to practice in the Port Phillip court. Judge Willis took this very seriously as while he was in Sydney he was responsible for establishing the procedure by which local attorneys were admitted. This included 5 years service under articles of clerkship, an  interview, and examination by practitioner examiners who issued  certificates testifying to the applicants’ fitness and capacity. Applicants needed to demonstrate their ‘Classical proficiency’  which included translation of   Aeneid of Virgil in Latin,  St John’s Gospel in the Greek,  and a competent knowledge of Arithmetic and Euclid.(See: Simon Smith ‘The Shaping of the Legal Profession’ in Judging for the People p. 73)

Several of the attorneys who applied had already been accepted for practice in the Sydney courts but Willis wanted to ascertain their fitness for his own court by himself.  He baulked at the admission of John Duerdin (sometimes spelled ‘Duerden’) who had a question mark over his fitness because, although he had been admitted as an attorney 10 years earlier ‘at home’,  he had been lately carrying on a business in Melbourne as an Ironmonger, Bookseller and General Dealer.  When it was urged that he had “left off business a long time ago”, it eventuated that it had only been since March and Willis rejected the argument that he should be admitted on account of the “peculiar circumstances of the Colony”.  Willis asserted

The peculiar circumstances is the very reason why I am more strict.  If parties are not respectable I will not admit them.  A person who has been carrying on a trade is not a proper nor safe person in whose hands to entrust the legal affairs of others.  I will not permit a person to step from behind a counter to practice in this court… He did not think that he could admit a party who had been a retail dealer in the town only two months since, with that degree of security which was due to the public and the members of that Court. (PPH 11/5/41)

[You’ll be pleased to know, though, that Mr Duerdin went off to refresh his knowledge and was admitted in November and went on to have a long and happy legal career]

The Port Phillip Herald of 11 May had an advertisement for the sale- that very day- of the town lots held by George Coulstock fronting Collins, Elizabeth and Flinders Lane, including property in what is now Staughton Lane, running behind Elizabeth Street. They were known as Number 10 and 11 of Block 4. George Coulstock bundled them up for sale with an additional property on the corner of Elizabeth and Collins known variously as Townend’s or Cashmore’s corner (so named for the grocers who had their shops on that corner). There’s a map from the time available here and my own very dodgy map below: 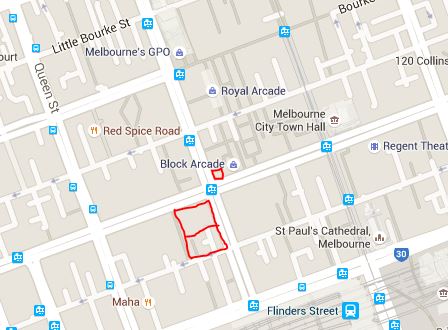 Although they had been surveyed as Numbers 10 and 11 in 1837, they had already been subdivided into smaller allotments. They are, of course, prime central city real estate today but I was interested to see what sort of business were located there in 1841.  All the lots sold at auction on May 11 1841, and I’ve put the price per foot reached in brackets but the results (in PPH 14/5/41) became too confused to follow near the end.  We know, as they didn’t at the time, that the bottom was just about to fall out of the real estate market.

Lot 4: 30 ft frontage to Collins Street, 52 depth. Mr Townend the Grocer [13 pounds sterling 13 s. per foot] (the small separate allotment on the other corner of Collins and Elizabeth)

Lot 6: 30 ft frontage to Elizabeth Street – vacant  [the report of prices received is confused at this point]

Lot 7: 74 ft frontage to Elizabeth St, 108 ft depth. “Upon this allotment is erected the Melbourne Tavern…it contains 9 bedrooms, three sitting rooms, a tap room or bar with cellar, an excellent kitchen and a ten stall stable with all necessary conveniences”. [immediate entry 2600 guineas]

Lot 14: 34 ft frontage to a lane leading from Flinders Lane- stables containing accommodation at the back of the Melbourne Tavern for 30 horses

Lot 15: 74 ft frontage to a lane leading from Flinders Lane- stabling for 10 horses and a garden as a convenience to the Melbourne Tavern

When the magistrates were awarding liquor licenses two weeks earlier, they mentioned the need for accommodation in the town and I was interested to see that the Melbourne Tavern had nine bedrooms.  In what was probably their version of today’s car parking, the Melbourne Tavern provided stabling for fifty horses, right in the centre of town.

SURGICAL OPERATION  [Could be distressing]

On Tuesday a splendid Surgical operation was performed at the public Hospital in amputating the leg and a portion of the thigh of the Aborigine named “Jack” at present in custody, charged with the murder of Slattery, a Shepperd [sic], who was in the employ of Mr Bennett, near Campaspy [sic] Plains. “Jack” it is supposed received the wound which rendered the amputation necessary from the musket of the Shepperd, who must have fired as the last resource.  Dr Cussen, belonging to the Government Medical Department, was the operator, assisted by Drs Walsome [?], Baylie and Wilmot. “Jack” was fully aware of the operation to be performed, having been made sensible through one of his country-women and a man divested of a leg having been paraded before him. Prior to Tuesday, he had been kept in a tent outside the Hospital, from which at the time appointed he was removed to the Surgery; being placed in a suitable position upon a table, resting in the arms of two men, but without being tied, the tourniquet was applied midway up the thigh: the knife was then brought to bear and the skin (which was found to the astonishment of the medical gentlemen to be as thick as a bullock’s hide!) was severed by a circular incision about four inches above the knee, and the upper portion being severed from the skin to the length of two inches, as a covering to the stump, the knife was passed round to the bone, which the saw soon separated, and the leg was laid upon the floor.  “Jack” bore the unpleasant dismemberment with considerable firmness only interrupting the operation by an occasional interjection of oh! and ah!  The operation occupied the short space of four minutes and a half, reflecting much credit on Dr Cussen, who conducted the whole business with considerable nerve and surgical tact. (PPG 14/5/41)

Some observations: I note that the name “Jack” is in inverted commas, which is unusual. Normally an Anglicized name was given without inverted commas, or there was an attempt to render the aboriginal name phonetically.  I can only imagine that “Jack” was brought to Melbourne and operated on with a view to putting him to trial for murder of the shepherd. He was obviously in a bad way if he was kept in a tent outside the hospital and made no attempt to escape. His ‘countrywoman’ was called upon to explain the situation to him, an unusual example of an indigenous woman being used as a translator.  How did she explain what was to happen to him, I wonder, and what sense did he make of seeing another patient with his leg amputated?  It was a four-minute operation, without anaesthetic, which was not to appear in Australia until 1847.  Not a lot of surgical finesse there, although obviously there was curiosity about his physiology.

There has been recent discussion about the fate of the bodies buried under the carpark at Victoria Market. The first cemetery in Melbourne was located on ‘Burial Hill’, which we now know as Flagstaff Hill in Flagstaff Gardens, but within a year it was recognized that a new position would need to be found. Crown Land was set aside between Franklin, Queen and Peel streets. The northern boundary was Fulton Street, which has since been absorbed into the Queen Victoria Market area. An article from The Age May 8, 2014  describing the history of the old cemetery, has a fascinating picture of the gravestones against the wall of the existing market, before their removal in the 1920s. The Melbourne General Cemetery opened in 1853 and became the major cemetery for Melbourne, although a small number of burials occurred at the site until 1917.

But in 1841 the concern was not so much that the cemetery was becoming crowded, or inappropriately close to other facilities, but that it was being used for grazing:

This place set apart as the receptacle of the remains of frail mortality, it may be naturally supposed would have been held sacred; instead of which, however, it is used as a mere grazing paddock for horses and other cattle (by those who consider themselves entitled to the entre) the herbage being abundant arising from the ground being fenced in. This desecration should be put an end to. (PPH 14/5/41)