I love summer. Once the weather turns, I grab hold of every warm autumnal day and try to make the most of it, fearing that it might be the last warm day we have  (although with our unusual weather at the moment, who knows what the weather will be like next week). Today had a forecast top of 27 degrees and looked beautiful, so off to the beach we go!

Over the last few years there’s been a new bus service that runs the semi-circle around Melbourne from Altona in the west to Mordialloc in the east.  Heidelberg Station is in the middle, so that’s where we started the journey. 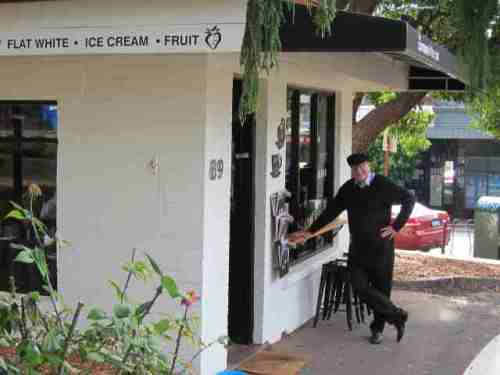 We needed coffee before we started of course, so we stopped at a new little coffee shop in the Fred Laslett Reserve near the station. And very nice coffee it was too! 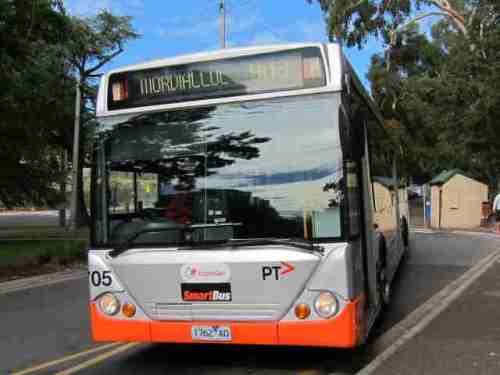 And within ten minutes, the bus arrived.

I’ve been curious about this bus line for a while.  When you see the buses at Heidelberg they never seem to have many people on them, but it certainly filled up and emptied several times on the two hour and ten minute ride to Mordialloc. Shopping centres and railway stations are the main drawcards, and the bus made many stops to pick up people from rather closely distributed bus stops.  Still, when the bus runs as often as this one does (approximately 15 minute frequency), the whole purpose is not so much to get to Mordialloc as a destination bang on time, as to act as a service that passes the major shopping centres along the way.  The bus driver was very good, watching carefully to make sure that the many elderly people using the bus (us excepted of course) were seated before the bus took off.

Finally we arrived- and isn’t it beautiful. If I’d had my bathers, I would have been tempted (although I note that not many other people were indulging).

The water was pearlescent and completely still.

“The sea wall and boulevard was erected from funds raised by Mordialloc Carnival Committee 1925-6” There were sea baths from 1886, but they were demolished in 1934.

We walked along the pier and marvelled at a huge stingray which looked to be about one metre across.  The creek is lined with small boats. The carnival that yielded the funds for the sea wall was held on the land beside the creek for many years.

Small boats moored along the creek 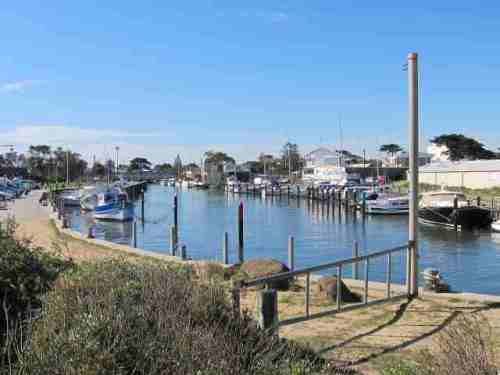 Time for lunch out in the open, overlooking the creek. Flathead tails, calamari and chips- and very good they were too.

Now for some serious historic walking. Indigenous people from the Boon Wurrung (Bunurong) people often camped alongside the creek in what is now Attenborough Park, on the edges of the Carrum Swamp.  Their territory lined Port Phillip Bay, the Mornington Peninsula, Western Port Bay and Wilson’s Promontory. In 1852 they were allocated 340 hectares along the creek as a distribution depot, but it was revoked ten years later because it was now considered too close to Melbourne.  The Boon Wurrung people were sent to Coranderrk near Healesville instead- how different it must have been to their coastal territory. 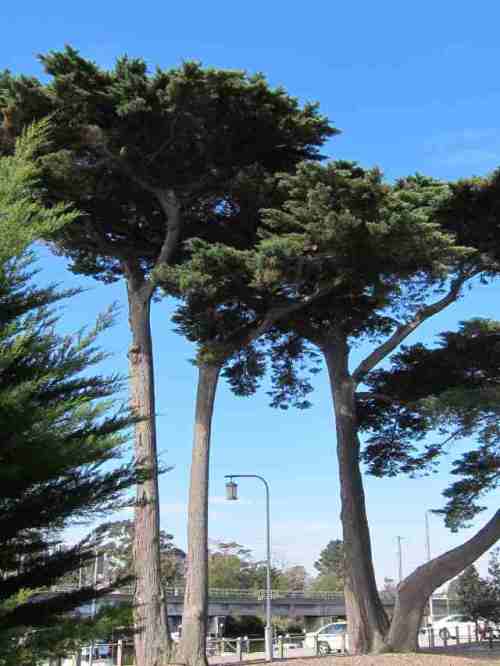 These rather hacked conifers are on the Signficant Tree register. I’m pleased that they’ve planted new replacement trees nearby because I suspect that these are on their last legs.

A WWI memorial. Interesting that it only commemorated WWI and not later wars 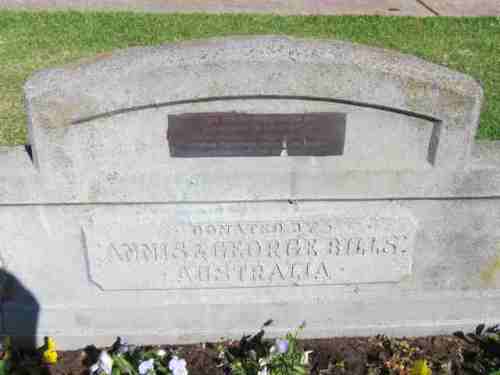 A Bills Water Trough. Over 700 Bills Troughs were constructed for working horses throughout Australia, funded through a trust established by Annis and George Bills who made their fortune through mattress manufacturing. You can find out more at https://billswatertroughs.wordpress.com/ 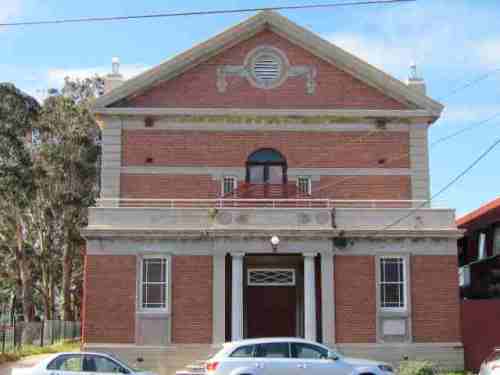 I peeped through the letterslot, where you could see the hall, probably much as it was left

And what is THIS?  It’s the Mordialloc Railway Water Tower, built in 1910 with a capacity of  20,000 gallons.  It has a National Trust rating but we couldn’t read the plaque because it was surrounded by scaffolding.

We could hear a train approaching and even though we enjoyed the bus trip, the train seemed much more appealing.  So we bid farewell to the water and headed back to Macleod, hoping that it’s not the last warm day we have this autumn.