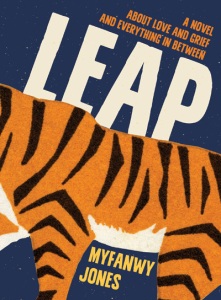 There are two epigraphs to this book. The first is from Emily Dickenson on the weariness of grief. The second is from Parkourpedia the online encyclopedia of parkour, the practice of running and leaping on urban structures. Running, Climbing, Jumping are the three parts of this book, as two people make the leap from crippling grief to living again.

Joe lives in a share house in the northern suburbs of Melbourne and works multiple jobs in cafes in High Street (Northcote?) at night. Much of his time is spent in the darkness, either working or barrelling along bridges and streets as he practices his parkour moves.  His girlfriend has died some little time earlier and he blames himself.

Elise, on the other side of town, is a middle-class, middle-aged graphic designer and she too is grappling with grief.  Her daughter has died; her husband Adam has left her. She goes to the zoo weekly and paints the tigers.  They are beautiful, but they are powerful too, and it is her awareness of their coiled savagery that attracts her.

The narrative alternates between the two characters and gradually enlarges its focus, just as the two characters do also.  Joe embarks on a crepuscular relationship with a nurse who has joined their share house, referred to only as ‘she’ or ‘the nurse’, and his friendship deepens with Lena, a workmate at one of the restaurants.  Elise reaches out to her friend Jill after the breakup of her marriage (as women often do) and begins to make plans for travel while her ex-husband Adam, increasingly vulnerable as the reality of the separation sinks in, begins to share with Elise the grief he had suppressed after their daughter’s death.

‘The Leap’ is the image that gives this book its title and acts as the metaphor that ties  the two stories together for much of the narrative.  Joe plans a carefully-executed leap from a bridge as a skilled parkour manoeuvre, while Elise contemplates the power of the leap of a tiger.  They are both obsessed by the thought of the leap, and there is page after page of detail of either parkour or tigers.  I soon found myself just skipping over it, which mounted up to quite a bit of missed text by the end of the book.  I could have put the book down at any point, really, but what kept me reading was my curiosity over whether the two characters would actually bring the two ‘leaps’ into reality and whether the author would do it with finesse.

The book was listed as one of the ‘Summer Reads’, set in Victoria and suggested by the State Library of Victoria, and it is a light enough read.  I generally soak up books set in my own home town but in this case, the Melbourne setting was not enough to quell my impatience with a book that seemed, paradoxically, both over-egged and yet thin.

This entry was posted in Book reviews, Uncategorized. Bookmark the permalink.

2 responses to “‘Leap’ by Myfanwy Jones”