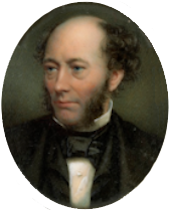 This blog is called ‘The Resident Judge of Port Phillip’ as a tribute to the first resident judge, John Walpole Willis, but there were in fact four Resident Judges of Port Phillip. William a’Beckett, the fourth and final one, is an interesting man. His main claim to fame is that he was the first Chief Justice of the Supreme Court of Victoria, after having served as Resident Judge in Melbourne since 1846.

As proud Victorians, it suits us to forget that until July 1851 the area that we now know as Victoria was instead just the “Port Phillip District” of New South Wales.  La Trobe was a mere ‘Superintendent’; the Legislative Council sat in Sydney where Port Phillip affairs were an afterthought, and all administrative functions were directed from Sydney.  The court was part of the Supreme Court of New South Wales and while the Resident Judge in Melbourne had some degree of autonomy, appeals went automatically to the full Bench in Sydney.  The Resident Judge was still a member of the full court, but distance ensured that in a practical sense he was sidelined from the activities of his brother judges in Sydney.

William a’Beckett was Resident Judge when the Supreme Court of Victoria was finally established under the Supreme Court (Administration) Act 1852. This act brought to an end a rather ambiguous seven-month hiatus where it was assumed, but not definitely stated, that  a’Beckett would continue in his position until Letters Patent were issued by the Queen or colonial legislation would be passed to make him Chief Justice of the new court.  The Colonial Office made it clear that it wasn’t going to issue the Letters Patent or any new Charter, so it was up to the new Victorian legislature to pass the necessary legislation. It eventually did so, and a’Beckett was sworn in as Chief Justice on 24th January 1852, with Redmond Barry (the former Solicitor-General) as first puisne (or assistant) judge, joined by Edward Eyre Williams in July 1852. END_OF_DOCUMENT_TOKEN_TO_BE_REPLACED